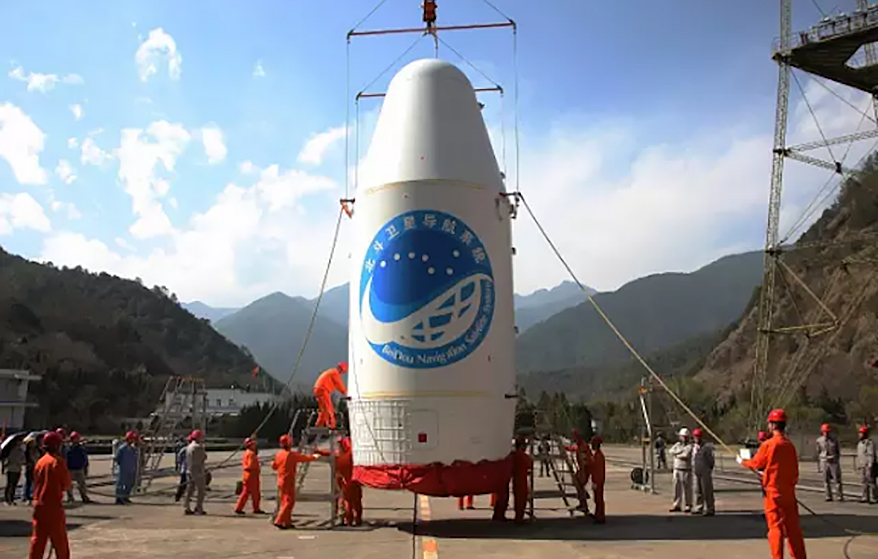 A Beidou satellite inside the payload fairing and ready for stacking at Xichang in 2016.

Russia and China have been increasingly moving toward greater synergies between their respective satellite navigation systems since at least 2015.

The stated goals of the two powers have been: ensuring compatibility and interoperability of GLONASS and BeiDou navigation systems; augmentations, including mutual allocation of measuring stations within the territories of Russia and China; global navigation satellite system performance characteristics monitoring and assessment; and navigation technologies application

Last month the partnership entered a new stage. Russia passed a law entitled “On ratification of the agreement between the Government of the Russian Federation and the Government of the People’s Republic of China on cooperation in the use of GLONASS and Beidou global navigation satellite systems for peaceful purposes.”

This has caused some experts to assess the future implications for both GPS and the United States.

At least a few industry insiders see this as part of an on-going effort to virtually combine the two systems and replace GPS as the leading global navigation system. This has far reaching geo-political implications and could impact GPS operations globally.

“I believe that, in the intermediate term, these nations will increasingly combine their systems. This will conceivably create a larger, more robust constellation” said Rich Lee of Greenwood Telecommunications Consultants. “It could spawn important synergies that benefit both countries without either losing control of their respective national system.”

Synergies could ultimately include having a shared, common signal, sponsorship of common chipset and receiver product requirements, and common ground reference stations.

It could also include additional cooperation on terrestrial precision navigation and timing (PNT) augmentation systems. Both nations already operate versions of the Loran terrestrial PNT system, for example, and meet regularly to coordinate and discuss technical issues.

Ultimately, the two nations and their satellite systems could declare their shared PNT architecture to be the official and primary source for PNT services. This would allow them to be more vigorous in trying to exclude other PNT sources and systems. Long recognized as a “silent utility” for transportation, networks, and a wealth of technologies, some see China incorporating PNT as part of its Belt and Road initiative.

Having such a large and robust satellite system could also add to the two nations’ predilection for interfering with international GPS signals over broad areas. Chronic GPS disruption by Russia and China in northern Scandinavia, the Black Sea, eastern Mediterranean, South China Sea, and elsewhere could become far more common and widespread as the Sino-Russo mega-constellation becomes more robust and the partners more emboldened.

Jamming and spoofing GPS has tactical and strategic advantages for Russia and China. It can support a specific mission or goal, such as protecting VIPs or harassing NATO wargames. At the same time, it demonstrates the vulnerability of GPS and shows U.S. and European weakness. With a combined and more robust system in place, jamming and spoofing GPS would also encourage users to switch away from using the U.S. system and toward using GLONASS-Bei Dou.

Recent research demonstrates that navigation satellites in medium Earth orbit (MEO) would benefit from augmentation by low Earth orbit (LEO) satellites. LEO satellites are much less expensive and easier to implement than those using MEO.

Lee thinks that this a likely next stage in the Russia-China global PNT partnership. China recently launched its first LEO satellite designed for both PNT and broadband communications. Lee believes the United States needs to initiate its own PNT in low Earth orbit projects to support both commercial and military uses.

“LEO PNT provides not only stronger, but wider band complementary signals. These features offer increased precision and can incorporate next generation authentication and security features,” Lee said. “The technical and industry accounts I have seen, plus the clear actions China is taking to reserve frequencies, make me conclude LEO and other PNT augmentation steps exclusively for their system are early, but also underway. Such a combined effort could threaten GPS’ dominance around the world and diminish its deserved status as the [global navigation satellite system] ‘gold standard’.”

Dana A. Goward is president of the Resilient Navigation and Timing foundation. He serves on the President’s National Space-Based PNT Advisory Board and is a senior advisor to Strategic Command’s purposeful interference response team.

It's not clear to me why two nations can through their own intent control the market for GNSS. Is not this a decision for the manufacturers of GNSS equipment? My understanding is that GPS chip manufacturers make their choice today based on a number of factors, including accuracy and availability of multi-GNSS signals, diversity of signal characteristics, and dependability of the service. Signal compatibility/interoperability is less about strategic actions by nations and more about what drives the market. As we move into the future, the decisions on which signals to use will increasingly depend on their resistance to interference & spoofing, including increased signal power, message authentication and resilience, and not whether nations have combined forces to make a larger, more robust constellation or regulated their citizens into using only their national systems. I think the winners will be those that provide the technological and operational advantages.