What Lies Beneath: Inside DARPA’s Subterranean Challenge 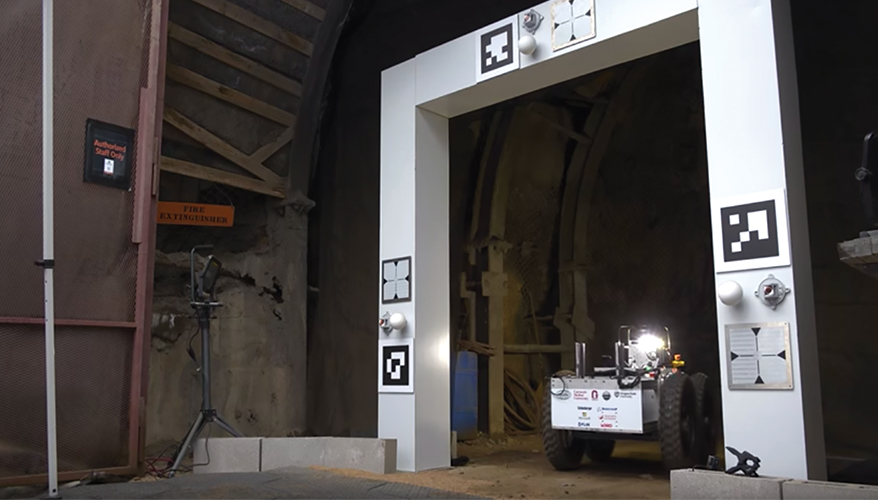 The military, law enforcement and search-and-rescue teams have different missions but face a common problem: operating underground. The Defense Advanced Research Projects Agency, better known as DARPA, is about to kick off a competition aimed at furthering robotics technology to help them do their jobs.

The subterranean operating environment is multifaceted. For example, militant groups like the Islamic State and Hamas have built extensive networks of underground passageways to move fighters and protect themselves from aerial attack. Drug cartels are using tunnels to smuggle contraband into the United States from Mexico. A former Thai navy SEAL died last year while trying to deliver oxygen tanks to kids trapped inside a cave.

Meanwhile, top defense officials believe the U.S. military will have to do battle in megacities and other urban areas that have complex underground facilities such as subway systems.

“Subterrain is just going to be something that we have to contend” with, said Army Lt. Gen. Robert Ashley Jr., director of the Defense Intelligence Agency. “That will be part of the war­fighting in the future.”

The U.S. military will need technology to sense and understand what is taking place underground, he noted during remarks at a technology summit in Washington, D.C., last year.

DARPA’s Subterranean Challenge is trying to address those needs. It’s a multi-phase competition aimed at promoting robotics technologies that can traverse, navigate, map and search underground environments. It will feature three different circuits — tunnel, urban underground and cave — before culminating in the grand finale that combines elements of each.

“The genesis of the SubT Challenge is the ability for us to operate in … the underground environments where we can’t take advantage of GPS, we cannot guarantee that there’s even lighting, and certainly can’t say that the terrain is going to be friendly,” Tim Chung, the SubT program manager in DARPA’s Tactical Technology Office, said during an interview at the agency’s headquarters in Arlington, Virginia.

For the competition, DARPA is interested in four technical areas: mobility, perception, autonomy and networking. “They all have to come together in order to get these things to work,” said Chung.

There are a number of different potential ways for robotic systems to move around, he noted.

“Whether that’s to be able to crawl, walk, run, drive, bounce, hop, fly — all of these different approaches, especially for things like [moving inside] elevator shafts or mine shafts, other vertical passageways — really drives thinking about mobility in a particular way,” he said.

The robots also need to sense and understand their underground environment. “That requires not only the higher levels of perception that we’re asking from our competitors, but the autonomy and the decision-making that allows you to do something with it,” Chung said.

For the networking component, the agency is hoping to identify breakthroughs that will improve the way information is sent from where it originates to the operators who need it.
Any team that can’t bring all four types of technologies to bear will likely struggle in the competition, Chung noted.

DARPA has been communicating with a variety of stakeholders, including the Army, Marine Corps, law enforcement and first responders to get their input.

“We really reached out quite broadly to learn what problems they have, see how indeed they all seem to share a common problem space and then tackle those types of … problems in the design of the rules and the way we’ve constructed the challenge,” Chung said.

There’s a high demand for technologies that help keep people out of harm’s way. The SubT Challenge aims to minimize the level of human involvement required so that personnel won’t have to be part of the first wave of forces entering a potentially hazardous subterranean environment in the future, he said.

Why would DARPA use a challenge competition to pursue these technologies?

“We really want to identify and open up the aperture to not just a [single] type of performer or a type of vendor, but in fact the perspectives that come from quite frankly all around the world, and use that to … come up with new ways of doing things,” Chung said. “A challenge is really great for fostering both that kind of wide aperture collection of ideas and vetting them in a [rigorous] setting.”

The agency has sponsored high-profile challenges in the past. In the 2000s, it hosted a Grand Challenge for driverless vehicles to traverse a variety of terrains.

“We’re seeing the fruits of that type of a challenge come to bear in the types of technologies that are being advanced by the commercial self-driving car companies out there,” Chung said.

While the agency has established rules and scoring criteria for the SubT competition, it is giving teams as much latitude as possible to come up with innovative solutions.
“We haven’t given them the answer of how to do it,” Chung said. “It really is: here’s the problem, you have to come up with creative ways to set yourself apart from your fellow competitors and win the challenge.”

Eleven teams — seven funded by DARPA and four self-funded — will compete in the first round, the tunnel circuit, which is slated for Aug. 15-22 at a defunct Pennsylvania mine.

Teams were selected to participate based on qualification materials that they submitted.

“We had evaluation criteria … that really focused on how well aligned are they with this DARPA mission of being bold and audacious in their technological approach,” Chung said. “We’re looking for really those teams that have a vision and an approach that’s reasonable, that will really be stretching the limits of what current technologies can do and they have a path to get there.”

The agency is still accepting applications for the urban underground and cave circuits, which are scheduled to take place in February 2020 and August 2020, respectively. Registration information can be found on the SubT website (www.subtchallenge.com).

While tunnels, urban undergrounds and caves pose similar problems, they each have unique attributes that create challenges.

Manmade tunnels can be dry and dusty or wet and muddy, and include obstacles such as rails, doorways, gates and bulkheads, Chung explained. Urban undergrounds can include metro transit systems, storm drains and other challenging infrastructure such as stairs, escalators and elevators.

“These are the things you might find where pedestrians and humans live that make it great for humans to walk around and navigate, but could potentially be quite challenging for robots,” he said.

Caves, on the other hand, are naturally occurring and “a lot less predictable” in some ways than manmade environments because of their geological structures, he said.
The SubT Challenge circuits will test the platforms’ ability to handle each of the different environments.

“It’s really the combination of all those three that we’re interested in from a technology point of view,” Chung said.

Robots may have to navigate through narrow and confined spaces the size of manhole covers, he noted.

“There’s so many different variables like amount of vertical extents or the width and height of the passage ways,” he added. “There are places where you might see featureless environments. It’s really easy to get lost in storm drains that look the same at meter one as they do at meter 500.”

Obstacles to mobility aren’t the only challenge.

“What are the types of autonomy and perception approaches that can handle the dust-filled corridors of a mine or can handle the darkness of a subway transit tunnel, [and] can also then match the complete darkness that one might face in a cave?” Chung said.

Being underground can also make it difficult to network. For example, when commuters go into a subway station, they may lose cell phone connectivity, he noted. Technologies will be needed to help robots overcome that.

DARPA wants the challenges to take place in areas that are multiple kilometers in scale with missions lasting an hour or more.

“These are things that are intended to push us out of some of the technical envelopes that we might currently reside in” with existing systems, Chung said. That will test the endurance and range of the systems, he noted.

The final event, slated for August 2021, will bring it all together to see which robots are the most versatile.

“The analogy here … is you may be a good swimmer or a decent runner, but that doesn’t necessarily make you the best triathlete,” Chung said. “What we’re looking for in these technological solutions is the versatility to handle the unknown. And that’s what we’re trying to capture in that final course.”

Teams will be scored based on their system’s ability to find and identify various objects such as thermal mannequins, cell phones and fire extinguishers.

Chung declined to provide more details about the courses, saying he didn’t want to give too much away to the competitors. “We want these autonomous systems … not knowing what lies beneath and being able to manage, if not conquer, those environments.”

In addition to the systems track, the competition will also feature a virtual track where teams can test out technologies in a realistic simulation environment. Competitors in the latter track can access DARPA’s digital model library, known as the SubT tech repo, and mix and match different robots with various sensors in a virtual setting.

“The types of insights that you can derive from there are now countless,” Chung said. “Basically, you can design the autonomy and perception, all the software-based components that you would want to leverage in a solution and play it out.”

The virtual competition for the tunnel circuit began July 1 and was slated to last about a month.

DARPA expects the digital model library to expand and potentially include robots and other capabilities developed by the systems track teams, or those envisioned by the user community.

“That just leaves many more opportunities for exploration and maybe potential breakthroughs from those types of technologies,” Chung said.

What happens when the event is over and the prizes have been handed out?

“We intend and anticipate that a community will have arisen around that SubT Challenge that can carry … not only the research but also the defense-related technologies forward, civilian commercial-related applications forward, and then identify what the next research hurdles are,” Chung said. “I certainly don’t expect that the technologies that arise out of the SubT challenge will go on a shelf, but rather will start to make dramatic impacts to those first responder and warfighter communities.”

As stated, these tests have been run before, and as the U.S. Army command stated, one problem is that the process often doesn't yield any production results, leaving the soldiers with nothing to use. Already soldiers have a reluctance to using drones because they feel slaved and defenseless when controlling them.

And then there are armed and unarmed drones already commercially available that could aid in cave warfare. Does the U.S. Army really need (expensive) specialized drones for cave warfare? One such drone is the Switchblade, which the box already contains six. Another option is a cheap armed expendable hobby drone with thermal camera and gun. There are COTS systems out there that can be implemented today that can save soldiers’ lives already by being the first to fly into caves to scout them; I'm just surprised that they haven't been fielded, even if non-military grade. The key gamble would be to get stable remote-control reception when the drone flies deep into the cave.