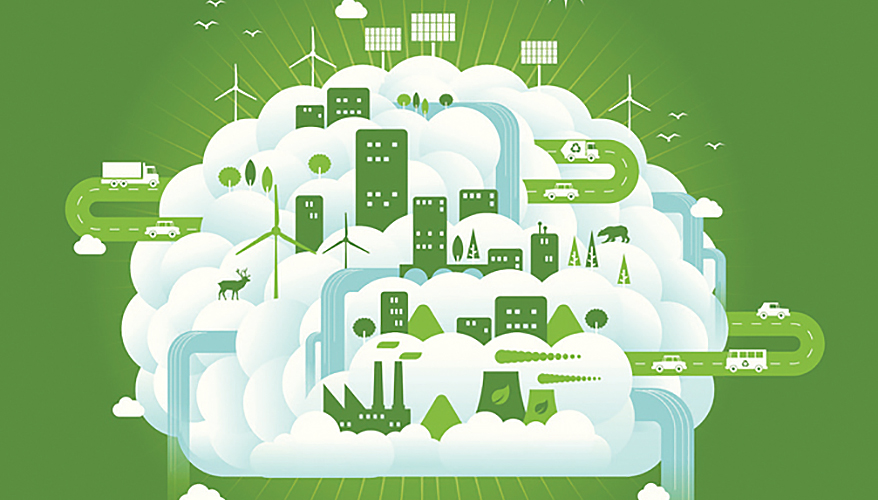 Fully two years into the Trump administration, it is obvious that it views all things environmental and climate-related with total disdain and, accordingly, has sought to undermine and marginalize the institutions of government charged with overseeing such matters.

Considering such deep-seated predispositions, how ironic is it to suggest a systematic effort to integrate the private sector — in particular, the highly profitable, globally influential environmental industry — into the conduct of U.S. statecraft, precisely for the purpose of compensating for America’s strategic shortcomings and contributing to a more vibrant, comprehensive approach to national security?

However unlikely it might be for something so heterodox to take hold in this decidedly 20th-century administration, the prospects of such transformative 21st-century strategic thinking might yet be within reach come January 2021.

These and other related business activities make up the $363 billion a year environmental industry, a predominantly service-oriented sector in a predominantly service-oriented U.S. economy. It represents over 3 percent of U.S. gross domestic product, involves 118,000 public and private organizations and firms — ranging from small businesses with a handful of employees to global mega-firms with tens of thousands of workers — and accounts for 1.7 million jobs in a $1.05 trillion global environmental business market. It’s a huge sector with a huge global market and a potentially huge, yet-to-be-fully-realized impact.

Other business sectors typically command immediate attention when it comes to national security: aircraft, shipbuilding, armaments, land combat vehicles and information technology among them. But what makes the environmental industry so unique is that it operates at the very intersection of environment and security in dealing with conditions — environmental degradation and resource scarcity/maldistribution — that determine the state of human well-being, thereby heavily affecting the relationship of humans to their governments, even as they link security at the individual/human level to security at “higher” national and global levels.

It deals directly with the conditions that underlie the often overlooked root causes of unfulfilled human needs and dissatisfaction that can mutate into unrest, violence, destabilization and conflict. As such, it is a singularly strategic industry, an incalculable prospective instrument of statecraft for exercising a “soft power” alternative to coercive military power.

There is a vast body of literature and policy that draws attention to the environment-security linkage. Innumerable commissions and study groups have spoken authoritatively on the subject — including the 1987 World Commission on Environment and Development, also known as the Brundtland Commission, the 1995 Commission on Global Governance, the 1997 Carnegie Commission on Preventing Deadly Conflict, and the 2004 UN Secretary-General’s High-Level Panel on Threats, Challenges and Change. All have delivered much the same message: Environmental stress is both a cause and an effect of political tension and military conflict. Environmental stress, caused by large populations and shortages of land and other natural resources, can contribute to civil violence.

More contemporary analyses — a 2015 Defense Department response to Congress, “National Security Implications of Climate-Related Risks and a Changing Climate,” and a 2017 Climate and Security Advisory Group report, “A Responsibility to Prepare: Strengthening National and Homeland Security in the Face of a Changing Climate” — have echoed similar sentiments: Global climate change will aggravate existing problems — such as poverty, social tensions, environmental degradation, ineffectual leadership and weak political institutions — that threaten domestic stability in a number of countries. Climate change risks to critical military and civilian infrastructure, to operations, and to strategic interests, span the domestic and international landscape.

Additionally, it is an undeniable fact that, due largely to climate change, natural disasters occur the world over with increasing frequency, intensity and catastrophic consequences: an average annual death toll of 77,144 over the period 2000-2017, with an annual average of over 193 million lives affected, and total costs over roughly the same period of $2.9 trillion. Disaster response remains an ultimate measure of the social contract between governments and people. It also is ground zero for the environmental industry.

Degraded environmental conditions and resource scarcity feed the deprivation and dissatisfaction that can lead to instability and conflict, which is the business of governments; but they also represent environmental markets — the business of business. This, then — cynical though it may sound — is the predicate for establishing the strategic role the environmental industry could play as an instrument of statecraft.

The global landscape for environmental business is immense and growing, a fact ably captured by the more than 35 CEOs and civil society leaders of the Business and Sustainable Development Commission. They contend that sustainable business models — based on support of the 17 sustainable development goals agreed to by the UN in September 2015 — could open economic opportunities worth up to $12 trillion and increase employment by up to 380 million jobs by 2030.

The United States has enormous capability for exploiting and shaping this global landscape — not militarily, but environmentally. Of the top 200 environmental firms, ranked annually by Engineering News-Record on the basis of annual revenues, many are construction, contracting and remediation firms like Fluor and Bechtel; consulting and studies firms like Jacobs and Tetra Tech; and engineering and design firms like Black & Veatch. All but 15 of the top 200 are headquartered in the United States. They exert extensive influence worldwide with some of them working in as many as 75 countries.

These companies are just a small sample — 200 of 118,000 enterprises — of the strategic reach the United States has and could have through the vehicle of environmental business. Moreover, since the 1992 Amendments to the Export Enhancement Act, U.S. policy has sought to foster the healthy export of environmental technology goods and services abroad. Today, U.S. environmental exports stand at a relatively modest $48 billion in an international market with some $713 billion of export potential, which suggests that, beyond the independent activities of environmental companies such as the foregoing, there are markets yet to be fully tapped.

That said, environmental business goes where the business is. It’s a business that does socially redeeming, humanistic things, but for the purpose of making money — even in the aftermath of disaster. In a more perfect world, “markets of plenty” would align with “markets of need.” But they typically don’t. As things now stand, over 70 percent of the prime international markets for the top U.S. environmental firms are in Canada, Europe and Australia/New Zealand.

According to public opinion, there is a sense of how important such recognition is. Domestically, Americans think the United States should continue to play a major or leading role internationally, but that it is losing influence and respect. Americans consider the environment an important national policy priority, much more so than climate change, but less so than such things as the economy, health care, education and terrorism. And the public thinks government is doing too little to protect the environment and reduce the effects of climate change.

The Trump administration’s actions to date leave no doubt about the difficulty of achieving such recognition. Since entering office, it has sought to reverse more than 70 environmental rules, while withdrawing from the Paris Climate Agreement, revoking the Obama executive order and memorandum on climate and national security, giving only gratuitous mention to environmental matters in the 2017 White House National Security Strategy document, and no mention at all in the Pentagon’s 2018 National Defense Strategy document.

At another level, even more difficult, is the looming question of how to go about integrating the private sector into the strategic deliberations and actions of government. There is no ready answer because this is totally virgin bureaucratic territory. For starters, it would be propelled by the experience of the environmental community which doesn’t exist or operate in isolation. It is part of an extensive “ecosystem” of stakeholders and has evolved well beyond the legacy of command direction, enforcement, compliance and public-private conflict that spawned the industry’s growth.

There is heightened commitment to public-private partnering, and the private sector itself has increasingly moved ahead of government — beset by political and ideological inertia — to establish and even enforce environmental requirements and standards.

All of this suggests an elevated, expanded conception of “whole-of-government” action that includes public-private-philanthropic and interagency-intergovernmental-international collaboration. It also suggests a much more creative, robust approach to financing mechanisms that could turn “markets of need” into “markets of plenty.”

Gregory D. Foster is a professor at the National Defense University and former director of the Environment Industry Study group of NDU’s Dwight D. Eisenhower School for National Security and Resource Strategy. The views expressed here are his own.