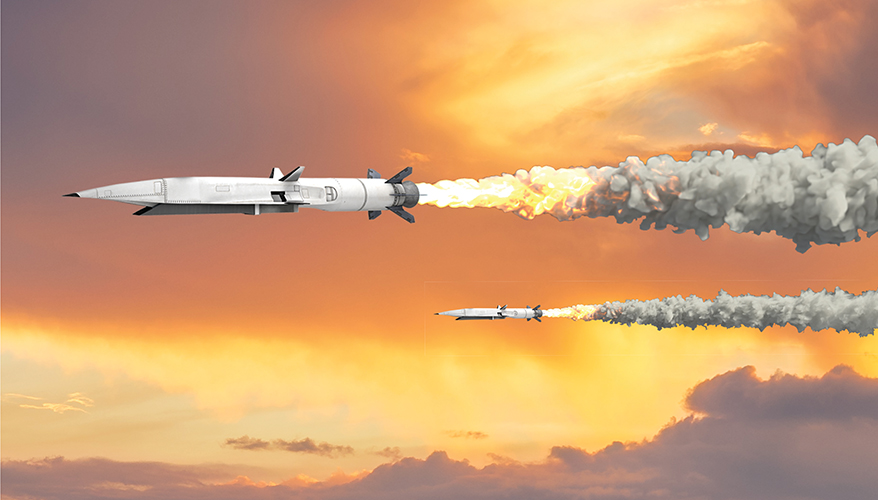 The National Defense Industrial Association will hold its inaugural Hypersonics Capabilities Conference at Purdue University from July 30 to Aug. 1. This timely and well-placed event reflects a growing need for collaboration among government, industry and academia. We hope the collaboration also addresses affordability and combat effectiveness.

First, some background. Operations in Iraq and Afghanistan demonstrated that the U.S. expeditionary force relies upon continued domain access and dominance to maneuver, engage and sustain its forces. This model has been successful, but it has been an Achilles’ heel. A credible threat to the ships and theater bases enabling American power projection would significantly degrade combat effectiveness. The Chinese and Russians took note.

The Defense Department’s 2019 military assessment of China reports that the nation sees “logistics and power projection assets as potential vulnerabilities in modern warfare — a judgment in accord with an expanding ability to target regional air bases, logistics and port facilities, communications and other ground-based infrastructure.”

The Army faces similar problems. Former Deputy Secretary of Defense Robert O. Work said, “We have 58 brigade combat teams, but we don’t have anything to protect our bases. So what difference does it make?”

Recognizing this threat, the 2018 National Defense Strategy calls for sustained and predictable modernization investments. Without them, the United States risks a joint force “irrelevant to the defense of our people.”

In 2018, Adm. Harry Harris, then U.S. Pacific Command commander, and now U.S. ambassador to South Korea, testified that China and Russia continue to develop and field “counter-intervention technologies” with hypersonic vehicles which threaten U.S. “freedom of movement and maneuver.”

The threat from hypersonics is not speed but maneuverability. In 2004, the Air Force’s test objectives for the Common Aero Vehicle were to travel greater than Mach 5, maneuver a cross-range of 3,000 nautical miles and strike with an accuracy of 9 feet. Cross-range measures the ability to maneuver axially from a standard ballistic trajectory. This would enable a weapon apparently on a ballistic trajectory toward Los Angeles to maneuver and strike New York. The United States does not have a defense against these weapons.

Michael Griffin, undersecretary of defense for research and engineering, said America will “have to create a new industrial base” to build “thousands” of hypersonic systems to deploy as a deterrent. Defense Department hypersonic research-and-development budgets reflect this new emphasis. In fiscal year 2019, the department spent $1.05 billion in major hypersonic budget lines. Those lines increased to $2.17 billion in the 2020 request.

The office of the secretary of defense funded the prompt global strike capability development program, which has served as an umbrella for three related systems: the Air Force’s hypersonics conventional strike weapons, the Navy’s intermediate range conventional prompt strike and the Army’s long-range hypersonic weapon.

The Army’s rapid capabilities and critical technologies office will control the Navy-Sandia developed glide-body data package to manage production of the glide vehicles for all the services. The Navy and Air Force have announced separate booster development contracts. The Defense Advanced Research Projects Agency’s Operational Fires program — the feeder for the Army’s long-range hypersonic weapon — is developing a ground-launched propulsion system. These inter-related efforts account for 58 percent of the 2020 hypersonics funding request.

To establish a deterrent, the Air Force plans to field hypersonics conventional strike weapons in fiscal year 2021 and the Army will field its weapon in 2023. The Navy’s intermediate range conventional prompt strike timeline has not been disclosed.

Additional programs aim to fill other gaps. The Air Force and DARPA are working on another boost-glide effort, which includes DARPA’s tactical boost-glide and the Air Force’s air-launched rapid response weapons. DARPA and the Air Force are also developing less-mature technologies for the hypersonic air-breathing weapon concept. The Army also plans for a deep strike cannon with a 1,000-mile range.

Meanwhile, significant effort should be given to how the military introduces effective hypersonic capabilities affordably. The systems are too important to the future of warfare. The office of the secretary of defense’s prompt global strike program previously created a loose alliance among Navy, Army and Air Force programs with each receiving funding from the office and coordinated direction. That alliance likely ends in 2020 when the funding goes away and a big increase in total hypersonics spending goes directly to the services and agencies. As the nuclear triad demonstrates, they will likely have separate priorities and go their own directions.

Griffin designated the assistant director for hypersonics to be the focal point coordinating hypersonics research and development, prototyping and testing.

However, when hypersonics spending exceeds $2 billion, there will be minimal engineering staff coordinating the expanding hypersonics portfolio. Given the necessary and continuous technology maturation required for hypersonics capabilities, the department’s approach invites duplication of effort across the services. Moreover, service-specific approaches invite technology cost growth through stove-piped, preferred-vendor, proprietary systems.

The department could instead build upon the success of its current program with a dedicated organization with the expertise to coordinate more collaborative hypersonic technology maturation and development across the enterprise. That organization could transition more common technologies, materials and architectures to the services.

Congress seemed to expect this approach as far back as 2007 when it created the joint technology office on hypersonics. Congress renamed the office the joint hypersonics transition office in 2018, and further authorized it to: ensure adequate foundational research and testing; coordinate R&D and test and evaluation across stakeholders; approve prototyping to speed technology maturation; expedite testing, evaluation and acquisition; and certify hypersonics budgets as consistent with a hypersonic roadmap. These prescribed activities align with department RDT&E budget activities and indicate a formal joint management structure that should manage a portfolio of accounts to mature and transition technologies. The department never established the office. Perhaps it should. For more common requirements would deliver more common and affordable technologies.

Duplicating effort for “unique systems” often results from a mistaken belief in “unique requirements.” The first mission of the joint office should be to prioritize and coordinate more common research objectives and technical requirements to address operational needs. It should manage research and requirements traceability, and it should support each hypersonic program with technical exchanges and collaboratively funding R&D projects. These would include science and technology for basic and applied research, as well as prototyping and technology transition projects for service systems and platforms. As the prompt global strike program demonstrated, more common requirements enable more collaboration and more common technologies.

This model has a successful precedent. A May 2005 Government Accountability Office assessment of the high energy laser joint technology office found by implementing a formal management structure and formalizing technology maturation priorities, the Defense Department increased collaboration and provided better coordination of effort. There was no apparent duplication of technology projects among stakeholders.

The Purdue conference also reflects industry’s recognition that academia is critical to success. The joint office could also manage academic research in foundational areas to mature technologies and develop the next-generation workforce. Recent and pending defense authorizations and appropriations indicate Congress’ growing desire to see better collaboration among government, industry and academia. The joint office would be best positioned to manage and mature that collaboration.

The national defense strategy also calls for “changes in the way we organize and employ forces” by anticipating “how competitors and adversaries will employ new operational concepts and technologies to attempt to defeat us.”

American and adversarial operating models are different. China’s posture is focused on “counter-intervention” by repelling an adversary approaching Chinese waters and operating areas. Its land-based, ballistic and hypersonic weapons are not needed beyond the Chinese mainland or nearby island outposts. Conversely, the U.S. posture is expeditionary. It must assume the pre-positioned, stationary assets will be lost, and it will need an expeditionary hypersonic capability to counter or regain denied access.

This requires an important discussion about how the military will structure and employ its forces, and it may prove far more difficult than a technical modernization discussion. The conference agenda wisely raises these issues.

Marine Corps aircraft are tied to Marine air-ground task forces and are generally not available for theater operations. Moreover, these assets are not equipped to defend against hypersonic threats. The Army has recently begun efforts to develop strategic range power projection, but military planners must assume its forces will be just as vulnerable as their targeted counterparts.

The Air Force provides a unique asymmetric advantage for the United States through its ability to strike targets anywhere on the globe. These attributes are vital to empowering successful, decisive strategies against highly capable adversaries, but the service’s plans for its bomber force are insufficient.

Retired Air Force Lt. Gen. David Deptula is dean of the Mitchell Institute for Aerospace Studies and also a senior military scholar at the Air Force Academy. William Mahan, a former submarine officer, is a small business owner and board member of NDIA.

JUST IN: Hicks Voices Concern About Pace of Hypersonic Tests

Re: Viewpoint: Collaboration Key to Developing Superiority in Hypersonics

Usually when new weapons systems of high destruction are created and introduced, Think Tankers and politicians start formulating treaties and policies of use. Hypersonics is a literal “Game Changer” and even if those Hypersonic Glide Vehicles are hype and don't particularly work yet, there are indeed missiles that travel faster than Mach 5+. Treaties and policies should be created before Hypersonics get into service in mass quantities. Controls have been dictated with Nuclear, Chemical, and Biological (NBC) weapons. What then is the "Red Line that shouldn't be crossed" regarding Hypersonics? What is the proper response for the use of Hypersonics in a liberal firing fashion? Should a nation always announce the use of Hypersonics in combat to warn civilian airliners, but wouldn't that give away the element of surprise? What would constitute fair use and what would be considered illegal use of Hypersonics? Would attacking satellites, the Space Station, an impact on the Moon, or just one high value person be considered illegal for Hypersonic missiles? The U.N. or G20 Summit should met to discuss the proper use of Hypersonics or the skies would be filled with Mach 5-20+ missiles going who knows where and from who, what, where, and why.

Cenebar at 6:56 PM
Re: Viewpoint: Collaboration Key to Developing Superiority in Hypersonics

Interesting quesitons posted in the comments section; unfortunately, they nearly mirror those for autonomous strike systems and mirror the "develop controls on something that doesn't exist but is perceived to be of mass use." Controls on NBC were developed after decades of use and shouldn't be applied to hypersonic weapons (or any other technology that doesn't exist or isn't out there is great quantities). To do so hamstrings those who really do focus on responsible use while leaving other nations (Russia, China) free reign to do whatever they want. A measured approach is required.