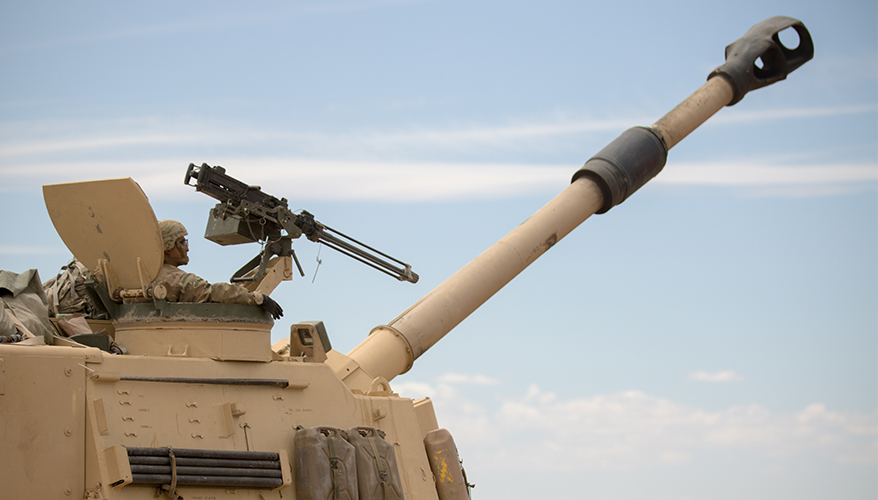 The Army is examining options to add an autoloader to the extended-range cannon artillery system, according to the director of the long-range precision fires cross-functional team.

The extended long-range cannon, or ERCA, is designed to extend the range of the Paladin self-propelled howitzers to 70 kilometers, which is double its current capability. The move is part of the Army’s effort to improve its fires capabilities to counter adversaries that can outgun current systems. The first ERCA prototype will begin testing from October to January at Yuma Proving Ground, Arizona, Col. John Rafferty told reporters July 17 during a media day at Joint Base Meyer-Henderson Hall, Virginia.

The service has an “incremental strategy” for the system and plans to field it in a battalion in 2023. A second battalion will be fielded in 2024 with an autoloader, he noted.

“We're working on ... ‘How much do we need to know before you make the decision? Whether we want to produce prototypes of each one of these ... autoloaders or is there a way that we can make a smart decision earlier and then move faster to deliver the autoloader?” he said.

Adding the device would help the artillery system shoot up to 10 rounds per minute and reduce the crew needed to operate it, Rafferty noted.

“In large-scale ground combat operations, we need to be able to mass and deliver a volume of projectiles,” he said.

The Army is looking at two potential options for the autoloader, Rafferty said. One is provided by a vendor and one is designed by the government, he noted, declining to name the vendor.

There are multiple potential designs that can fill the role of an autoloader, Rafferty noted. For example, one resembles as “Coke can dispenser” that has a belt feeding into a magazine. Others have proposed designs that resemble a “robotic arm grabbing a projectile,” he said.

Additionally, the Army awarded BAE Systems a $45 million contract this week for the ERCA increment one prototype, according to a company announcement. Under the contract, BAE will integrate the extended-range cannon artillery system onto an M109A7 Paladin Integrated Management, replacing the 39-caliber turret with a 58-caliber, 30-foot long gun barrel. This will “improve the rate and range of fire with the development of power distribution software and hardware integration solutions,” the announcement stated.

Rafferty said the service is performing developmental testing on new projectiles as well.

“One of the big things to emphasize is ... it requires new projectiles to go that far,” he noted. “It takes new propellant … a new cannon and new fuse to get the accuracy we want … at 70 kilometers.”

Cancelling Crusader was not a U.S. Army Faux Pas decision, that was done solely by then-SECDEF Rumsfeld...

Does this upgrade kind of sound familiar? Does it sound like the 40-ton Crusader Self Propelled Howitzers (SPH) that fired 4,000 rounds in 2002 and has autoloading and a 40-50KM range already, meaning that the US Army could have had a winning SPH with that desired range and maneuverability way back in the mid-2000s that kept up with the M1 Abrams and M2 Bradley? What happened? The critics said it wasn't easily deployable and thus shrank to the 23-ton NLOS-Cannon to barely fit inside a C-130. The same can be said about the PZH2000 having the same 2019 desired specs; the Crusader won over that! All three new SPH designs were cancelled and the M109 lives on with numerous upgrades. So now we have this circuitous Paladin upgrade route where the M109 had to be upgraded with a new turret, a new chassis, new Bradley suspension and tracks, and now a new cannon and autoloader? In that case, the U.S. Army should have produced the PZH2000 or Crusader SPH way back before Year 2000 which already had an autoloader and 40KM range. Wow, talk about a U.S. Army Faux Pas decision that affected the Army and the taxpayers.