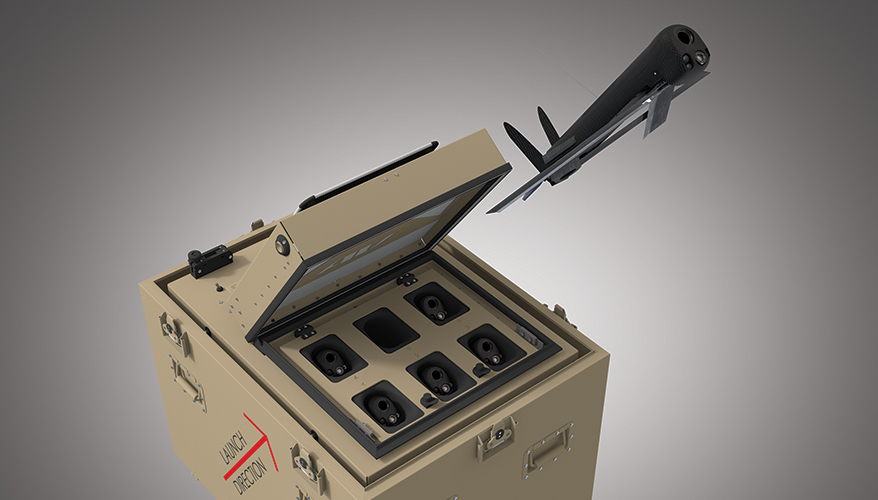 The Army, Marine Corps and special operations forces have been using Switchblades for forward operating base defense for about seven years, Brett Hush, vice president of tactical missile systems at the missile’s manufacturer, AeroVironment, said in an interview. Normally, when sensors detect an incoming threat such as a mortar round, operators have to run out, kneel down and fire back with a single-shot tube.

“You want to be able to quickly respond back to them,” he said. However, that left warfighters vulnerable and took some time.

After launch, Switchblades glide or propel themselves toward beyond-line-of-sight targets using GPS, video feeds and a quiet motor to deliver lethal effects at a range of about 6.2 miles.

There is a nonlethal intelligence, reconnaissance and surveillance version, the Blackwing, which can also be dispatched from the company’s new multi-pack launcher. The system can be placed outside and remotely fired from the relative safety of a command-and-control center more rapidly and with up to six shots, Hush said.

Aside from allowing rapid firing of the unmanned aerial vehicles, it is enclosed and protected from the elements until the lid opens and it’s ready to fire. “It can sit out there in the environment for a long time,” Hush said.

It weighs about 160 pounds fully loaded and can be powered with solar energy or traditional batteries. The system could be mounted on vehicles, but so far the multi-pack launcher is only being used on bases, Hush said. Discussions with customers continue on other applications and the expansion of launch tube numbers, but nothing is firm yet, he added.

The Army is the executive agent for munitions in the “lethal miniature aerial missile” category and procures the Switchblade for the other services.

AeroVironment and General Dynamics Land Systems announced last year that they are working together to integrate Switchblades onto vehicles with an eye toward the Army’s next-generation combat vehicle and the Marine Corps’ armored reconnaissance vehicle, a joint company statement said.

Hush said there haven’t been any foreign military sales of the Switchblade yet, and if there were, it would only go to close U.S. allies.