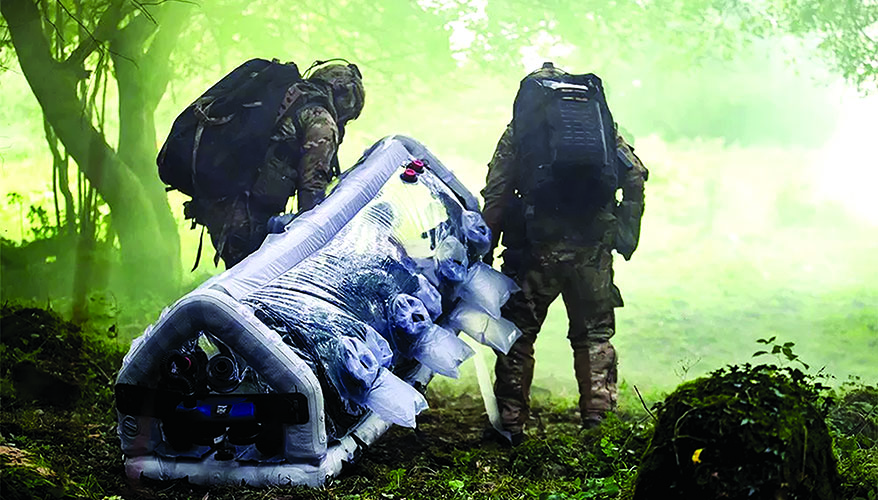 Peke Safety, which provides equipment for first responders, worked with SOCOM to develop the device, which was dubbed the “MilPod.” The stretcher has a single-piece inflatable frame covered by a clear envelope that inflates in about nine seconds and creates a portable chemical- and biohazard-ready isolation chamber, Peter Cooper, vice president of marketing and partner at Peke Safety told National Defense during the annual Special Operations Forces Industry Conference. The lining is removable and can be discarded after use, which helps maximize its efficiency, he noted.

“You can replace the bag without having to throw everything away, which is another important cost element,” he said.

The MilPod comes with both an air filtration system and a portable cooling unit, giving the stretcher the ability to supply positive or negative pressure throughout the chamber for up to 10 hours, he noted.

“This allows them to put a contaminated patient into a safe zone to protect the medic and the patient — as well as the infrastructure — so you can reduce the decontamination costs of vehicles and aircraft,” Cooper said.

The stretcher can also be used to aid burn victims with its “positive mode,” cooling and humidity systems, he noted. “Positive mode” is designed to help prevent burn victims’ wounds from becoming infected while they await further treatment, he said.

“You’re keeping an infection away from the patient, which is very critical if you are badly burned,” Cooper said. “Also, you can introduce an element of cooling and humidity through the cooling system, which can actually arrest the blistering cause in the early stages of a burn.” This can accelerate the healing process, he added.

The MilPod weighs approximately 44 pounds and can float on water and be dragged through harsh environments, he noted.

“The whole thing has been designed with special forces in mind, covert missions where you … may have to go across rough terrain,” Cooper said.

The MilPod was also designed to safely admit patients to hospitals without cross-contaminating equipment or personnel, he added.

The system is currently undergoing trials, where it is being transported via medevac helicopters and other aircraft, he noted. It can act as a portable stretcher, portable operating room, autopsy unit and a temporary body bag, he said.

Re: New Stretcher Can Isolate Wounded on Battlefields

A TREMENDOUS NEW DEVELOPMENT WITH MULTIPLE OPTIONS TO EVEN BE GOOD IN CAMPING AND EXPLORING IN HARSH ENVIRONMENTS.