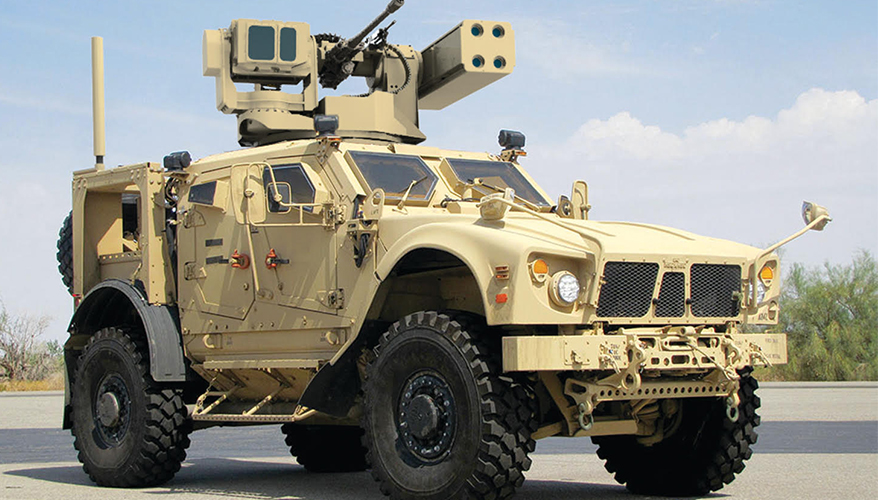 PARIS — Leonardo DRS saw disappointment last year when it lost out on the Air Force’s lucrative T-X jet trainer program to a Boeing-Saab team. But the company recently won some major contracts for other Pentagon programs, and its chief executive officer sees more growth opportunities ahead.

About 70 percent of the contractor’s business is split evenly between the Army and Navy, CEO William "Bill" Lynn said in an interview with National Defense at this year’s Paris Air Show. Satellite communications is another big area of focus, he noted.

Last month, the company announced it had been awarded a contract worth up to $977 million to support Special Operations Command’s Global Access Network, or GAN, program. The competition was a recompete and Leonardo DRS was the incumbent.

“What we do there is supply the satellite communications support for all Special Operations Command operations,” Lynn explained. “We've set up an operation center for them and we provide all of the support for that. And what this contract means is it will expand that support and continue it for another five to eight years.”

Lynn called GAN “a foundational program” for the company that could lead to additional business opportunities. “We would look to expand those offerings to other customers mostly in the military and the government,” he added.

In April, Leonardo DRS announced that it had received its first production delivery order for the next-generation of U.S. Army mission command computing systems known as the mounted family of computer systems II. The order was worth $132 million.

“What that is is basically network computing for vehicles,” Lynn said. “With this second phase [of MFoCS], we're providing that network communication support, the servers and laptops for 130,000 or so Army vehicles.”

It provides the service with a platform that it can use to diffuse all the data that comes into the vehicles through sensors, he added.

Right now, it's largely a stovepiped system. "But with the new MFoCS capability that we're bringing, you'll be able to fuse that data, and that's something we think is going to provide an important increase in capability for the Army,” he said. “You have a much more powerful tool for the vehicle commander.”

The technology will provide a common picture for newer vehicles that are coming into fleet as well as legacy platforms, he noted. Next-generation combat vehicles and the network are two of the Army’s top six modernization priorities.

Air-and-missile defense is another major focus area for the service. Leonardo DRS is providing platform self-protection systems for the Army as part of the initial maneuver short-range air defense, or IM-SHORAD, initiative.

The technology, called the Trophy, is an active protection system for tanks to defend against rockets and missiles before they hit the platform.

“Obviously the armor protects the tanks, but the projectiles have become so advanced you'd prefer to knock them down rather than just try to beat them with the armor,” Lynn said.

In January the company announced an undefinitized contract action initially worth $80 million to provide the Army and Marine Corps with additional Trophy systems. The program has a value of more than $200 million so far, according to a press release.

UAVs pose a growing threat from high-end adversaries as well as terrorist groups, he noted.

“It's a difficult target to defeat … and so we've developed a system that combines a turret and radar with some defensive systems — missiles, guns, ultimately probably directed energy will be included in this,” he said. “That's, I think, an important technology in the fight of the future.”

The company is also supplying the Army and Navy with infrared countermeasure systems that protect helicopters by directing enemy missiles away from the platform using lasers. Leonardo DRS has a quantum cascade laser that it acquired when it purchased a laser company in California called Daylight Solutions a couple of years ago, Lynn noted.

“It gives you a size, weight and power advantage over some of the existing lasers, which lets you extend that protection suite to lighter weight helicopters in addition to the heavyweight helicopters that were part of the original programs,” he said.

With the Navy, Leonardo DRS has two fundamental lines of business, he said. One is power propulsion for surface combatants, submarines and aircraft carriers. “We're looking to compete for the future frigate … as they move forward on the next surface combat,” he noted.

The company also provides electronics for radars, displays and other electronic equipment aboard ships. “We're building the new generations of that equipment as they upgrade it across the fleet,” Lynn said.

National Defense asked Lynn if Leonardo DRS was pursuing international customers for the T-100 that lost out in the T-X competition. Lynn said its Italian parent company Leonardo, of which DRS is a U.S. subsidiary, is pursuing other opportunities for the trainer.

“In the U.S. you wanted a U.S. company in front of the bid, so Leonardo DRS was the prime” bidding for the T-X award, he explained. But in other regions, the parent company sells it directly.

Lynn declined to discuss conversations that he has with potential customers at the Paris Air Show about other Leonardo DRS business segments.

During the wide-ranging interview, Lynn, who served as deputy secretary of defense during the Obama administration, weighed in on defense budget issues.

Some lawmakers have moved to restrict the Trump administration’s ability to reprogram Defense Department funds for other projects such as the border wall, which it has done this year to the tune of billions of dollars. Lynn said he hopes the two sides can reach a middle ground on the issue.

“You want to give DoD flexibility to manage the department effectively and spend the money efficiently,” he said. “Things change over the course of a fiscal year, so you'd like to have that flexibility. … Hopefully they can find a compromise that gives DoD the flexibility they need and Congress the confidence that that flexibility is going to be used for the purposes it has intended.”

In recent years, lawmakers have directed a slew of acquisition reforms to help the Pentagon onboard capabilities more quickly and effectively. The Section 809 Panel has recommended another batch of changes to improve the system. Lynn said it might be wise to wait before more reforms are imposed.

“Probably the best thing is to implement what we've decided on over the last couple of years and try and implement that smoothly rather than continue” shaking things up, he said.

“You want to have some stability in the system, some predictability,” he added. “We've had a number of initiatives. What I think we need to do now is to put the structures in place to implement those initiatives and do it in a smooth, predictable” way.

Meanwhile, Lynn anticipates relatively high levels of military funding in the coming years. For this fiscal year, the defense topline was $716 billion.

“You have to recognize the country is devoting substantial resources to defense at this point,” he said. “There's strong bipartisan support for that spending at this level largely because of the threats we face” including from advanced adversaries such as Russia and China as well as terrorist groups, he added.

Politicians and voters are gearing up for the next election cycle. But Lynn doesn’t believe the outcome will have a huge effect on defense toplines.

What’s needed is predictable growth higher than the rate of inflation, Lynn said. “It doesn't have to be massive, but I think that's a way to make sure that you're protecting the balance between investment” in force structure, readiness and modernization, he added.

JUST IN: Defense Department Reviewing Industrial Base for Hypersonic Weapons

The Leonardo DRS turret in the JLTV photo above is a real Force Multipler and Game Changer and should be used by all land services that operate the JLTV from the Navy to the USMC, Army, USAF, USCG, and Special Forces. The combination of weapons' firepower is unparalleled and sure beats the single M240, or M2HB, or MK-19. Had the U.S. Army used this Leonardo DRS RWS turret in some situations such as FOB, base security, Embassy security, convoys, or SOF missions, I think the mission outcome would have been different. The ability to mount Javelin ATGM, APKWS, 2.75" rockets, or other future weapons would prove the value of the Leonardo DRS turret. The DoD should not limit using this turret to just anti-drone defense, and should explore other turret modification options such as mounting three or four 2.75" APKWS rocket pods with a M2HB .50cal for urban warfare.