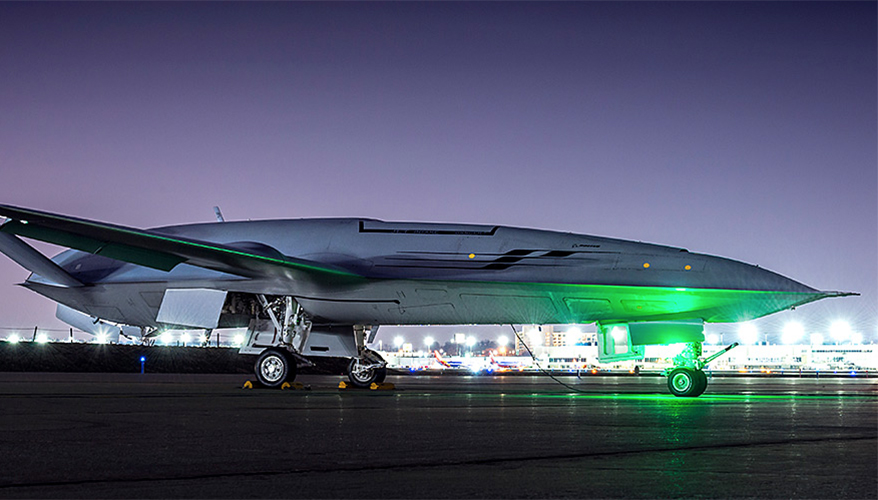 NATIONAL HARBOR, Md. — The Navy could soon fly a prototype of an MQ-25 aerial refueling drone for the first time, a service official said May 6.

The MQ-25 Stingray is intended to be an aircraft carrier-launched, unmanned tanker that can refuel the Navy's fighter jets.

"That is extending the range of what our current [carrier] air wing is able to achieve,” said Angie Knappenberger, deputy director of air warfare for the deputy chief of naval operations warfare systems.

Knappenberger told industry leaders and reporters at the Navy League’s Sea-Air-Space conference at National Harbor, Maryland, that she anticipates first flight of the MQ-25 prototype will take place in “a month or so."

The drone was driven in late April from Boeing's technical plant at St. Louis Lambert International Airport to MidAmerica St. Louis Airport, and then to Scott Air Force base in Illinois, according to Defense News. Knappenberger confirmed that the aircraft arrived at Scott Air Force base last week. The service chose to move the platform so it could have a more dedicated airspace for performance testing, as opposed to the busy civilian airport where it was previously located, she said.

“Being able to fly it out of Scott Air Force Base … is really going to accelerate the program and help us really start to develop some of the technologies that we need,” she said. “It's also going to help a lot with some of the airworthiness and some of the initial testing that is going to be happening with that platform,” she added.

Last year the Boeing was awarded a $805 million contract to build four MQ-25s. The program is estimated to cost a total of $13 billion for 72 aircraft. The Navy had planned for the drone to achieve initial operating capability in 2024, but service leaders are pushing to field it sooner.

Although the unmanned aircraft's main focus will be on aerial refueling, the Navy plans to add intelligence, surveillance and reconnaissance capabilities into the platform, Knappenberger said.

You can't really get the perspective from the photo but the plane is really large. It's as big as an F-18