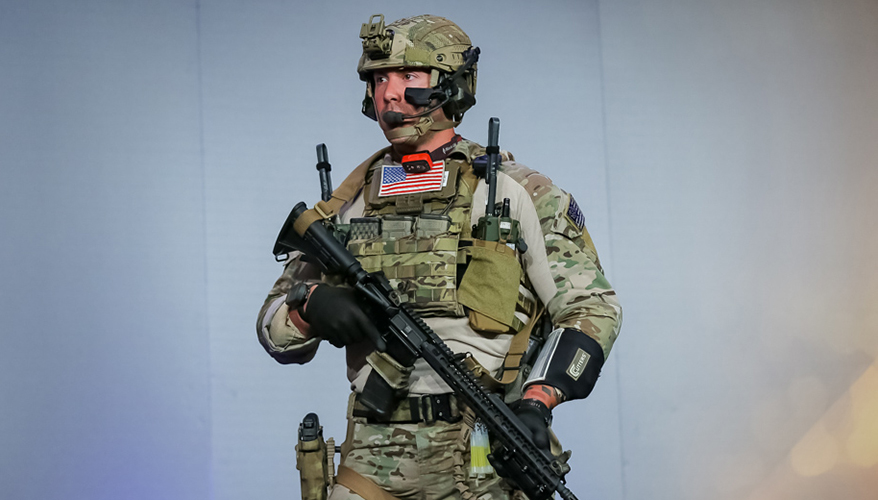 TAMPA, Fla. — When Special Operations Command set out to create what would be popularly known as the ‘Iron Man suit’ seven years ago, developers assumed that the state-of-the-art in body armor would not improve much over the next few years.

That assumption led the command down a development path that would actually make the Tactical Assault Light Operator Suit resemble the comic book hero with heavy armor from head to toe and a power system and exoskeleton needed to help the operator move in the bulky suit.

However, body armor technology did improve, said Army Col. Alex MacCalman, director of SOCOM’s joint acquisition task force, the organization that developed the Iron Man suit — officially known as TALOS — and will now take it to the next level: the “hyper-enabled operator.”

While special operators are not wearing a full suit of armor, about 45 percent of their body is now covered with lighter plates using technology spun out of the TALOS program, MacCalman said May 22 at the Special Operations Forces Industry Conference, sponsored by the National Defense Industrial Association.

“We feel like we had a tremendous success in that endeavor. It’s not a concept right now. It’s actually something that is being worn right now by our special mission units,” he said during a briefing.

The vision for the suit that was proposed by former SOCOM Commander Adm. William McRaven at this same conference in 2013, would be for the first commando on a raid to go through a door to have protection against bullets and bomb blasts. The technology development program was a five-year, $80 million effort that would go on to produce several prototypes. The last of them, the Mark 5, did have full body armor, but would not be effective in close-combat scenarios, SOCOM leaders declared, and the TALOS program is now evolving into the hyper-enabled operator concept.

While McRaven’s vision was not completely fulfilled, operators do have better protection against AK-47 rounds with the new armor, which was the work of several vendors, MacCalman said. The few units that are using the new armor are doing combat evaluations, and work is continuing on how to scale up the manufacturing process to produce more armor for more units, he said. The Army is interested in the new armor as well, he told National Defense.

As far as exoskeletons, organizations such as the Army are still interested in developing the technology, and work continues in that field in the commercial sector, MacCalman said.

The TALOS system also envisioned a helmet with a heads-up display, augmented reality and a robust communications system. That will be part of the hyper-enabled operator technology development program, but special operators are not using the new helmets presently, MacCalman said. “We are working on the helmet to lighten it up,” he added.

Part of the hyper-enabled operator concept envisions pushing information to the tactical edge using dependable communication links, cloud-based computing and augmented reality that would be projected on a heads-up display in the helmet, MacCalman said.

“We are using this TALOS project as a foundation to launch us into that research. And all the lessons we learned and the tech that we have seen is our opportunity to use that as a springboard,” he said.