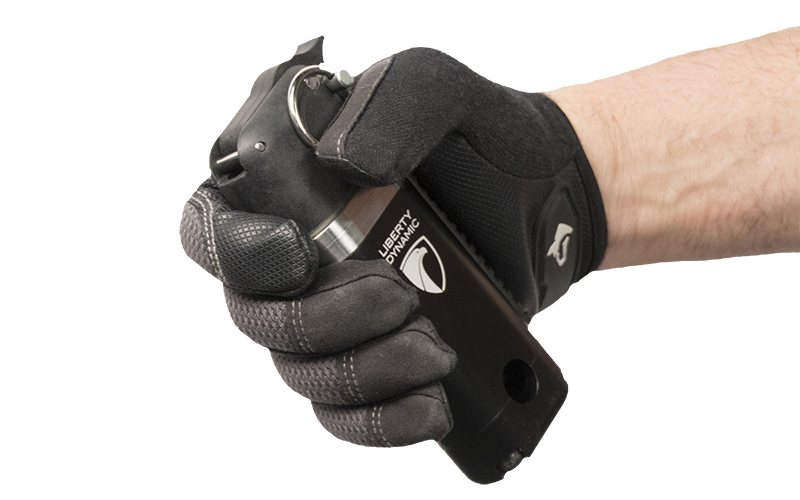 TAMPA, Fla. — A new flash-bang stun grenade designed to greatly reduce collateral damage to buildings and hostages, as well as enhance the safety of its users, has caught the attention of the U.S. military.

After four years of research and development, the Enhanced Diversionary Device was introduced to the market in January. The Colorado Springs, Colorado-based small business Liberty Dynamic will begin to fill orders this summer with special weapons and tactics teams, said co-founder and CEO John M. Chapman.

The company has also received a Small Business Innovation Research grant from the Air Force, which is interested in firing the weapon from a small drone. The Marine Corps administered Joint Nonlethal Weapons Directorate, which is responsible for fielding all nonlethal weapons for the U.S. military, has also shown interest, he said.

Legacy stun grenades “achieve amazing tactical advantages when a tac-team comes in. However, by current design, the collateral damage is burning down structures,” Chapman told National Defense on the sidelines of the Special Operations Forces Industry Conference, which is sponsored by the National Defense Industrial Association.

They also cause injuries to operators. “We in the operating community all have a buddy who has lost fingers from his device prematurely detonating in his hand,” said Chapman, who served in the Marine Corps.

The device uses a digital fuse with zero deviation from the time it detonates. A standard flash-bang grenade deviates in plus-or-minus milliseconds, he said. “That doesn’t seem like a lot but when you are doing a tactical surgical entry, those milliseconds matter.”

In the off chance that something goes wrong and the warfighter can’t get rid of the grenade fast enough, the operator is not holding any energetic material, he said. There is a visual LED indicator warning the user that they have made a mistake. And as long as the user is holding the device away from his head and body, it will not injure him, Chapman added.

It is not a pre-mixed energetic material. It is a binary A-B explosive, meaning both compounds in their separate chambers are inert until they are mixed upon detonation. The detonation doesn’t take place until the two chemicals are pushed out of their exhaust ports. “It is not going to explode on your person,” Chapman said.

Unlike conventional stun grenades, the flash and sound effects can be adjusted. Boosting the power of conventional nonlethal grenades, which top out at about 175 decibels, could make them fragment, which could cause injury. But since the detonation occurs outside the new device, the operator can pack more power into it up to 187 decibels. The flashpoint is 9 million candela. “It burns so clean and so fast we don’t have ... secondary flammability,” Chapman said. If there are oily rags, curtains, sofas, or other flammables nearby, they are not going to catch fire, Chapman said.

There are also cost savings. The digital detonator, which separates from the compounds is reusable, but the portion with the chemicals is one-time use. It costs $44 to $50 per shot, which is about what law enforcement pays for conventional stun grenades, but 40 percent less expensive than what militaries spend.