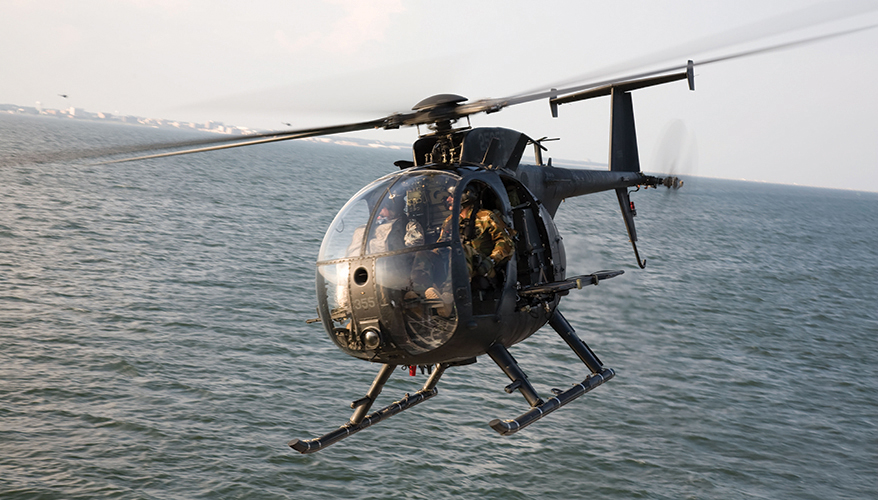 This is part 2 of a 3-part special report on Special Operations Command vehicles.

Facing an evolving threat environment, Special Operations Command is modifying its fleet of rotary- and fixed-wing platforms to ensure commandos can reach their destinations around the globe.

Militaries worldwide are increasing their reliance on special operators, and the demand for airlift capabilities is expected to rise, said Matthew Beres, airborne retrofit and modernization analyst at Forecast International, a Newton, Connecticut-based marketing consulting firm.

“The airlift platforms must be able to align with special operations needs such as stealth, while being capable of sustaining high [operational tempo] … meaning they need to be maintained properly and available for missions,” he said in an email.

For rotary wing aircraft, SOCOM may leverage the Army’s future vertical lift work to replace its mission-enhanced Little Bird helicopters. As a nimble unarmed system, the MH-6M troop transport variant is used to deliver special operations forces in and out of tight spaces and can also be used for reconnaissance.

However, the service’s legacy fleet is aging, said Navy Lt. Phillip Chitty, a spokesperson for the command.

“Sustaining the current capability presents readiness challenges due to the age of the current fleet,” he told National Defense in an email. “Many of the airframes have been in service since the 1980s with some dating back to Vietnam.”

SOCOM Acquisition Executive Jim Smith said the command is eyeing the Army’s future vertical lift capability “set one” for a potential replacement. The Army is pursuing the future attack reconnaissance aircraft to meet this need. FVL is the Army’s push to replace its current rotary fleet with modernized systems in the 2030s. Capability set one refers to the lightest platform in the effort.

“We haven’t passed the point of no return where we don’t think that [future attack reconnaissance aircraft] is potentially the replacement” for the mission enhanced Little Bird, Smith said during remarks at the Special Operations/Low Intensity Conflict Symposium and Exhibition in Arlington, Virginia, hosted by the National Defense Industrial Association.

Until a replacement is available, SOCOM is performing block 3 upgrades on the Little Bird. The modifications include a new airframe shell, a performance enhancement kit and upgrades to the cockpit avionics, Chitty noted.

Contracts for the components were awarded in fiscal years 2018 and 2019, with production slated to begin in early fiscal year 2021. The earliest date the service plans to make a decision on additional upgrades for the aircraft is fiscal year 2024, he said.

“We’re changing out all the infrastructure for the [mission enhanced Little Bird] to add life to those programs in the eventuality that we’re going to need to have those on the battlefield longer,” Smith said.

Boeing was awarded a $48 million maximum indefinite-delivery/indefinite-quantity contract to produce upgrade kits for the aircraft — which is known as the Killer Egg — in December. The work is slated to be completed by December 2026 and the majority of it is being performed in Mesa, Arizona, according to a Defense Department announcement.

“This new radar provides mission-essential capabilities while addressing obsolescence issues associated with today’s legacy radar systems,” budget documents stated.
SOCOM is also upgrading its Black Hawks from a block zero to a block one configuration, Chitty said. Upgrades include common infrared countermeasures and vibration reduction of direct fire weapons systems, according to budget documents. The command hopes to procure multiple kits and integrated logistics and test support for the modifications, according to the proposal, which must be approved by Congress.

SOCOM-specific requirements for the new platform include the ability to be transported in a C-17 and an in-flight refueling capability, the RFI stated.
CV-22 Osprey tiltrotor aircraft are undergoing modifications as well, Chitty noted. These are focused on improving situational awareness with technologies such as a color helmet-mounted display and an automated enhanced situational awareness suite.

The command is also recapitalizing all of its Boeing MH-47G Chinooks as part of its “renew” program. The effort is in collaboration with the Army’s block two CH-47 Chinook upgrades.

The legacy MH-47Gs are the oldest in the Chinook fleet, said Randy Rotte, director of global sales and marketing for cargo helicopters and future vertical lift at Boeing. The effort provides SOCOM with an opportunity to add modifications that the Army’s Chinooks have already received, he noted.

“They have a lot of aircraft that started life as A-model Chinooks, whereas when the Army went to F-models, the MH-47G didn’t get all of the same improvements at that time,” he said. “This is their opportunity to go back and to capture those as well as the … improvements that big Army is getting.”

The most significant part of the effort is replacing existing airframes with machined airframes, Rotte said. Traditional sheet-metal frames experience more vibrations, which lead to cracks and stresses. The machined versions are more robust and reliable because they are able to tune to the same frequency of the aircraft to reduce these vibrations, he explained.

“That’s probably the No. 1 thing the Special Forces folks are looking for and why they are actually going to get aircraft before big Army,” he said. The MH-47G upgrades are scheduled to be delivered before the CH-47 modifications, he noted.

Additionally, the upgrades provide a new rotor blade and an improved drivetrain. The rotor blade is a new design that allows the system to get additional capability at the same engine power, he added.

With the drivetrain, Boeing was able to “beef up some of the components” to provide 10 percent additional torque from the engine into the rotor system, Rotte said.
Having robust Chinooks is especially important for special operators because they are often required to fly for long hours in difficult conditions, he said. The new airframe is expected to be easier to sustain, which could increase the amount of available aircraft or reduce the amount of people needed to maintain them, he noted. Additionally, they are anticipated to be more reliable and have a longer lifespan, he said, noting that the first Chinooks installed with the frames are still operational.

When comparing a sheet-metal frame CH-47D Chinook with a machine-frame CH-47F, the amount of hours required for maintenance was “significantly less,” Rotte said.

Boeing received the lot one $139.8 million contract for the first four MH-47G block II aircraft in July 2018, according to a company announcement. Rotte said the first aircraft of the lot is scheduled to be loaded on the final assembly line this year and is slated for delivery at the end of 2020.

Another goal is to develop a larger number of system parts that can be used by the Army as well, which would reduce supply chain costs, Chitty said.

Beres said the Chinook upgrades are likely to increase the performance and decrease the operating cost of the helicopters. The modifications are also meant to improve operations in hot and high-altitude environments, he noted.

However, those improvements may not be as relevant as the military pivots toward great power competition with Russia and China, he added.

“Our National Security Strategy is moving focus to Eastern Europe and Southeast Asia — it’s a legitimate question to ask how much these improvements will be realized in a completely different climate and operating environment than they are designed for,” Beres said. “Billions of dollars in improvements will mean nothing if fleets are grounded due to salt water degradation of components or extreme cold temperatures.”

Electronic warfare in particular is “one of the fastest growing and probably most important sectors in the defense market,” he said, noting that Russia could potentially outmatch the United States in this area. SOCOM must adjust its airlift capabilities to prepare for these threats, he added.

“Special Operations airlift aircraft must be able to protect against EW threats that may knock out the spectrum of airlift electronics systems,” he said. Additionally, the command could make small changes, such as changing aircraft position, “in ways that get unnoticed, but profoundly affect mission effectiveness,” he said.

SOCOM must also keep operating costs down while increasing the availability of its aircraft, Beres noted.