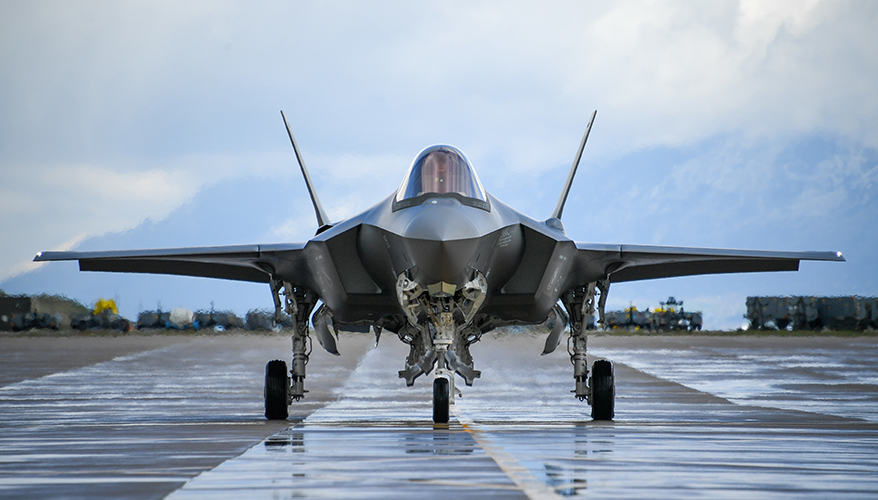 The ongoing dispute between the United States and Turkey over Ankara’s plans to buy a Russian air defense system could lead to delays and cost increases for the F-35 joint strike fighter program, according to the Pentagon’s chief weapons buyer.

Turkey is a NATO ally and one of nine partner countries involved in producing the fifth-generation fighter.

They're "a very good supplier on the F-35 program,” Undersecretary of Defense for Acquisition and Sustainment Ellen Lord told reporters May 10 during a briefing at the Pentagon.

However, the Turkish government also plans to buy the Russian-made S-400 air defense system. That has sparked the ire of Trump administration officials who fear that the purchase could end up comprising the security of the stealthy F-35.

“The U.S. continues to speak with Turkey on a routine basis [and] we have been very clear that the F-35 and the S-400 are incompatible,” Lord said.

Policymakers in Washington have said that Turkey will be cut out of the supply chain if it proceeds with purchasing the Russian system.

“We have for some time now been working to look at alternate sources of supply for the F-35 supply chain that is inside Turkey right now,” Lord said.

However, removing Turkey from the project could cause problems for the other F-35 partners, Lord said.

“We see a potential slowing down of some deliveries over the next two years, some potential cost impacts,” she said. “But right now we believe we can minimize both of those and are working on refining” that analysis.

Lord noted that the United States still hopes Ankara will decide to forgo the S-400 and buy the U.S.-made Patriot air defense system instead.

Lord declined to comment about prices or costs associated with those talks.

“We are hoping to wrap up here very shortly,” she said. “We would like to have a contract award in the June-July timeframe.”

She noted that the Defense Department continues to work closely with Lockheed to better understand the cost drivers in the production line.

“We are getting better and better fidelity around that, which is allowing us to continue to construct incentive fees around the work that’s being done, and the critical work to keep the number of aircraft coming off that line consistent with what we need to deliver each year,” Lord said. “We continue to look at ways to get cost out of the system” including sustainment costs, she added.

Lockheed has said it is offering the F-35A for less than $80 million per plane by Lot 14, which is lower than the price tag of $89 million per aircraft that was part of the deal signed last year for Lot 11.

Clarification: This article has been updated to note that the F-35A will be offered for less than $80 million per plane by Lot 14, not Lots 12 through 14.

Re: Top Pentagon Official Says U.S.-Turkey Spat Could Cause Delays for F-35 Program

I believe that this is the proper US DoD approach as obviously the F-35s were built to counter S-400 SAMs. This should be Iron Clad that no F-35 deal should be reached if Turkey acquires the S-400s. MEADS might be another good substitute for Patriot for Turkey. If Turkey goes through purchasing the S-400, then stop all F-35 sales and there is no way the USA would be able to protect and retrieve lost technology.
And this belies the need for purchasing the F-15X for CONUS air defense because if the F-35 runs into trouble such as this, there will be another source of COTS fighters to defend the USA. Besides, not every USAF base will be stocked and fly the F-35. Those old F-15C/Ds need replacing with new fighters. The F-15Cs’ deployment to counter Iran goes to show that F-15Xs could also fulfill this role with better radar, EW/ECM, missile load, awareness, performance, and sensors. The F-15X is needed to back up the stealth fighters.

Krashnovians at 8:13 PM
Re: Top Pentagon Official Says U.S.-Turkey Spat Could Cause Delays for F-35 Program

It would be helpful in understanding Turkey's Patriot / S-400 decision if there was more coverage and balanced discussion that lead to Turkey's decision. The fact that Turkey's preference for long range air defense was and is Patriot is under reported in US publications. Turkey has been attempting to purchase Patriot since the early 2000's and has been repeatedly denied by the USG. Understanding the reasons for those denials is an important part of the discussion which needs exposure if there is to be an understanding amongst allies and partners on maintaining an alliance and moving past rhetoric.