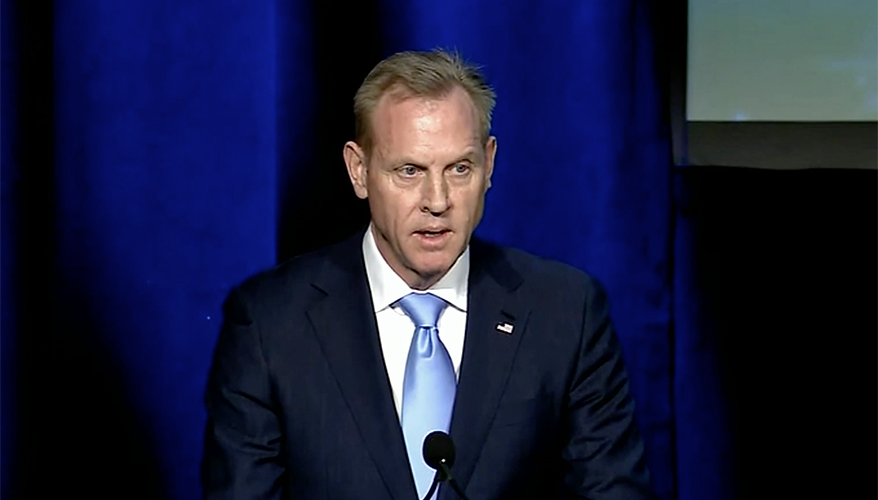 COLORADO SPRINGS, Colo. — It was less than a year ago when President Donald Trump proposed a separate but equal military branch dedicated to space. Government officials took the opportunity April 9 to make the case for a new space force as Congress takes up legislation in the coming months.

With negotiations with Congress imminent on all these matters, officials at the Space Symposium in Colorado Springs, Colorado, made their case for legislators to take action.

China is expected to be able to employ a laser that can target sensors in low-Earth orbit by next year, Acting Defense Secretary Patrick Shanahan said April 9 in a speech kicking off day two of the symposium. Such threats are one of many reasons the nation needs a space force, he said.

The space force will preserve U.S. dominance in that warfighting domain, he said. “What is vital is that we protect our $19 trillion economy and the systems our military runs on,” Shanahan said.

The proposed space force would be comparable to Special Operations Command in size and budget with about 15,000 to 20,000 personnel. It would be run by an undersecretary for space and a chief of staff. The organization would organize, train and equip its members with Title 10 authorities, Shanahan said.

The new branch would cost one-tenth of 1 percent of the Defense Department budget, or about $1.50 per U.S. citizen per year, he said.

Both Shanahan and Air Force Secretary Heather Wilson in a speech later in the morning urged the Senate to soon take up Raymond’s nomination. Air Force Chief of Staff Gen. David Goldfein called him the finest joint warfighter in the nation and quoted Mr. T., saying “I pity the fool” who would take him on in the space domain.

“We’re the best in the world in space, but our adversaries know it," Goldfein said.

One of the nation’s strengths compared to its adversaries is its ability to form coalitions, he said. The United States must work together with allies and partners to protect and defend space, harden networks, build resilience in space systems and carry out information sharing, he added.

Wilson, who has announced her resignation, spent very little of her speech talking about the space force, choosing instead to highlight improvements to the much maligned space acquisition system, which currently resides at the Air Force Space and Missile Systems Center at Los Angeles Air Force Base.

“We will not win in space with a Cold War acquisition system,” she said. The center has made strides over the past year flattening its bureaucracy and speeding up delivery of space systems, she added.

“We need a commander focused 100 percent of their time on space,” Shanahan said. Under U.S. Strategic Command, space was at best the third most important item on the commander’s list of importance after the nuclear missions.

Current STRATCOM Commander Air Force Gen. John Hyten said in a press briefing that space ranks third on a good day. Strategic deterrence is always his number one priority and nuclear command and control his second. What is third depends on the circumstances of that day.

“When space was not a contested environment, that was OK. When [space] was just a supporting function for others, that was OK,” he said. But when he took command he realized that it did require someone’s full time attention. He appointed Raymond joint forces component commander to handle the ever growing space mission.

Hyten has been an advocate for a unified command structure with a four-star commander ever since.

“If you have to fight and understand an adversary focused in real time in that environment, you need somebody focused on it in real time, and that could never be me,” Hyten said.

Correction: A previous version of this story incorrectly said that the Space Development Agency would replace the Space and Missile Systems Center.

On-Orbit Servicing of Aging Satellites Possible by End of Year