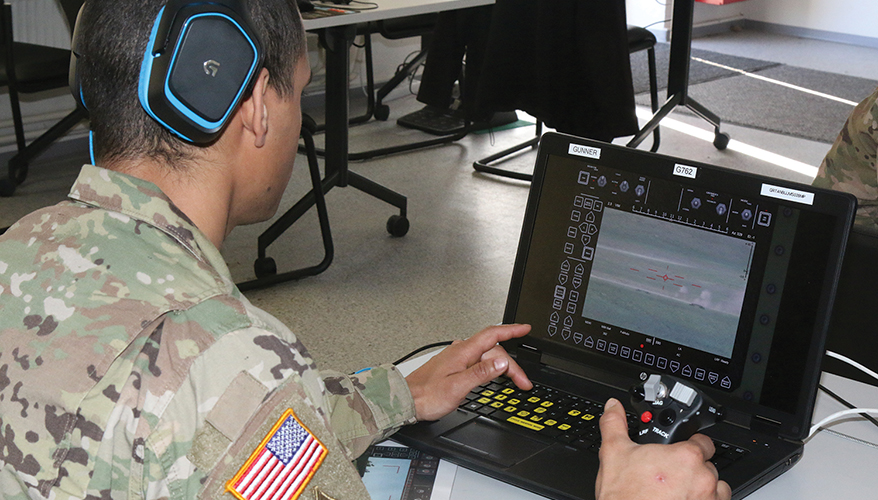 The Army is fielding a new Stryker combat vehicle virtual trainer in Germany to help boost the readiness of its soldiers.

The trainer was fielded at the Joint Multinational Simulation Center — which is based in Grafenwoehr, Germany — in January. The system was slated to undergo its first training session in March, said Joe Mercer, the center’s chief of tactical gaming. It was built by the Army Aviation and Missile Research, Development and Engineering Center.

Soldiers can practice both dismounted and mounted operations on the system, allowing them to practice a “full spectrum of operations,” he said. The trainer is a mock-up of a Stryker that has the same dimensions, he noted.

“It uses gaming technology to create a virtual environment that the Stryker crews use in order to engage with one another and engage with enemy situations,” Mercer said. They can also practice their battle drills and tasks of that nature.

The simulator is incorporated in the Army’s Stryker training strategy that is broken down into “crawl, walk and run” phases, according to Joint Multinational Simulation Center documents.

Mercer said the system will be mainly used for the “crawl” stage, when soldiers are preparing for the live training scenario. Using the simulator, they can practice basic soldier skills such as radio communications and tactics, techniques and procedures, he noted. The training focuses on a “rinse and repeat” capability, Mercer said, which allows the soldiers to reset the simulator back to where they started if they need additional training on a specific skill.

“You just can’t do that in a live situation,” Mercer said. “You can go through these basic tasks over and over again until you reach proficiency.”

The documents stated the “walk” phase of training incorporates both simulation training and live fire with blanks.

Using the trainer helps the Army cut costs, Mercer noted. Some benefits of using the simulator include the ability to perform “highly realistic training at no cost compared to live training cost,” the ability to train units from squad to companies on a single system and the option to train under any conditions, the documents stated.

“In the real world, if you turn on a Stryker and then filled it up with fuel, that will cost the Army a lot of money and a lot of time to reserve the training area and facilities to actually conduct those types of operations,” Mercer said.

The Stryker units in Europe will likely use the trainer for one to two sessions a week before going to the gunnery.

The trainer is also scheduled to be fielded at Fort Carson, Colorado; Fort Hood, Texas; Fort Wainwright, Alaska; and Vilseck, Germany, according to the documents.