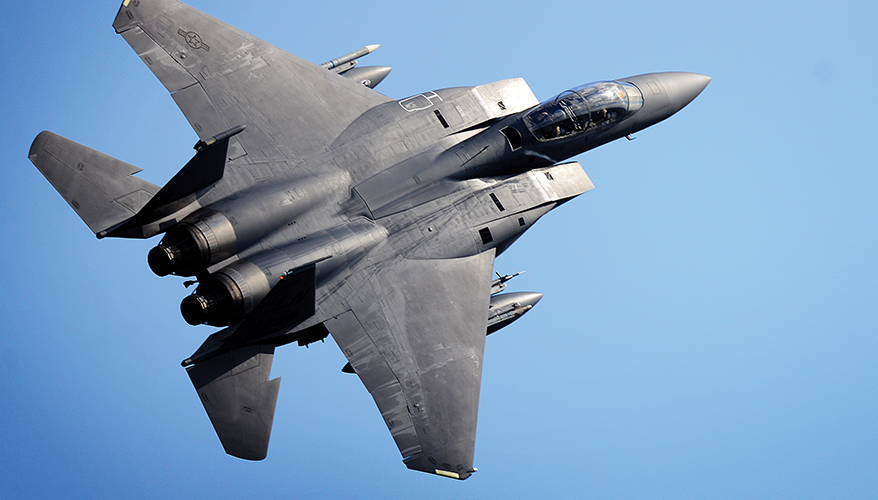 A battle is brewing between the Pentagon, congressional purse-holders and two of the country’s top defense contractors over President Donald Trump’s controversial 2020 budget request calling for the Air Force to acquire a souped-up variant of the F-15 jet fighter.

The initiative to replace older Boeing-built F-15C/D Eagle aircraft with the new F-15EX comes as the service is aiming to ramp up purchases of the Lockheed Martin-built fifth-generation F-35 joint strike fighter, which is expected to be the centerpiece of the future fleet. The request for the F-15EXs was not originally part of the service’s plans, Air Force Secretary Heather Wilson confirmed to reporters in early March.

“Our fiscal year [2020] budget proposal that we originally submitted [to the office of the secretary of defense] did not include fourth-generation aircraft,” she said at the Air Warfare Symposium in Orlando, Florida.

When Air Force Chief of Staff Gen. David Goldfein was asked if the service wants to purchase the F-15EX, he replied: “We want to buy new aircraft.”

However, the service’s tune has since changed. In late March, after the president’s budget was released, Wilson said the decision to ask for the Boeing platform would help the service meet its capacity and readiness goals through 2030.

“We think it was the right thing to do to keep that capacity high,” Wilson said.

“We are seeing a decline in the number of fighters available,” she added. Meanwhile, there is an “increase in the average age of those fighters, and if we look at the whole system and the whole capacity over the next 10 to 20 years, one of the airframes that is not going to make it is the F-15C.”

The budget request calls for eight F-15EX aircraft for fiscal year 2020 and an additional 72 through 2024. The Pentagon plans to eventually buy a total of 144.

The proposal is creating a divide among members of Congress as they prepare to debate authorization and appropriations bills for the next fiscal year.

The congressional joint strike fighter caucus announced in April that a group of 103 lawmakers cosigned a letter calling on their colleagues to add 24 F-35s above the president’s budget request. The add-on would make for a total of 102 procured in 2020.

“We strongly urge your continued support for the F-35 Lightning II program,” the lawmakers wrote. “Our adversaries continue to advance surface-to-air missile systems and develop their own stealth fighters. It is essential that we continue to increase production of our nation’s only fifth-generation stealth aircraft in order to ensure the United States maintains air dominance and to further reduce overall program costs.”

Rep. Martha Roby, R-Ala., co-chair of the caucus, said in the letter the F-35 is the military’s most cutting-edge war machine, and is critically important to the national security of the United States and its allies.

“Congress must increase procurement of this next-generation fighter jet to ensure our country’s continued dominance in the skies,” she added.

The recent disagreements regarding jet fighter procurement are rooted in the platforms’ core differences, said Aviation analyst and Vice President of the Teal Group Richard Aboulafia.

“Part of it, of course, is the ongoing argument between whether you want an amazing equipment package [that comes with the F-35] or you want an air vehicle with range, payload and speed” similar to the F-15, he said.

The F-35 has unique stealth capabilities as well as advanced situational awareness and a highly integrated operating system.

John Venable, senior research fellow for defense policy at the Heritage Foundation and a former fighter pilot, noted that China and Russia are investing in their own next-generation fighters.

“If I’m a Chinese J-20 or Russian Su-57, I’m the ninja that’s going to be sent after those [U.S.] assets … to take them out,” Venable said during a panel discussion in Washington, D.C., hosted by the Mitchell Institute for Aerospace Studies. “This is where the F-15EX I think falls short. It would not be able to survive in that environment and it will not be good for the long term. … It is not a good investment for the Air Force to make.”

While Congress gears up to debate program funding, observers alleged that Acting Secretary of Defense Patrick Shanahan, who worked at Boeing for more than 30 years, might have been biased in favor of his former employer. Shanahan was under investigation by the Pentagon’s Office of Inspector General over allegations that he has advocated for Boeing to receive government contracts. The Citizens for Responsibility and Ethics in Washington, a Washington, D.C.-based government watchdog group, filed a complaint against Shanahan, citing news reports that he promoted Boeing in procurement discussions at the Pentagon.

On April 25, the inspector general released a statement clearing Shanahan of any wrongdoing.

Proponents of the F-15EX have also cited budget constraints.

Gen. James “Mike” Holmes, head of Air Combat Command, told reporters in February that purchasing the F-15EX could be the “affordable answer” to meeting the Air Force’s goal of acquiring 72 new fighter jets each year.

The service needs to purchase 72 aircraft a year to improve and retain readiness, according to Wilson.

“There’s the cost to operate the airplane over time,” he said. “Does it require new military construction? Does it require extensive retraining of the people, and then how long does it take?”

Those are all costs that should be factored into the decision, he added.

Wilson said in March that Lockheed Martin “has not driven down the sustainment cost as much as we want” for the F-35. The company said it is working with the Air Force to address the issue.

“We have a shared goal of reducing sustainment costs to $25,000 per flying hour by 2025, which is equal to or less than fourth-generation aircraft,” a Lockheed spokesman told National Defense. “We are taking aggressive action investing and partnering to achieve that goal.”

Another issue is the future of the defense industrial base.

After the decision was made to insert another jet into the budget proposal to continue with a mix of fourth- and fifth-generation aircraft, “the conversation then turned to how are we going to maintain a robust industrial base,” said a defense official, who spoke to reporters on the condition of anonymity during a briefing at the Pentagon.

“For the future of the Department of Defense, it’s going to be good to have multiple providers in the tactical aircraft portfolio … and that’s what led our way into the F-15EX decision,” the official added.

In the future, the F-15EX may not be able to penetrate enemy air defenses like the F-35, the official acknowledged. However, it could be part of a mix of aircraft, each with different roles.

“The services are starting to examine more and more the interaction between stand-in and stand-off and the additional capability that kind of teaming brings to the battlefield,” the official said. “The F-15 is never going to be a stand-in weapon, but [a] stand-in weapon with sensors, communicating back to a stand-off platform that carries a lot more munitions is a pretty powerful combination.”

The strategic decision to pursue a mix of aircraft came from former Defense Secretary James Mattis. Then the question turned to which fourth-generation aircraft the Air Force should pursue, the official said. That was when defense industrial base issues came into play and Boeing’s F-15EX was chosen. At no time was Shanahan involved in the discussions, said the official. As a former Boeing executive, ethics rules prevented him from being part of the conversation, said the official, who spoke before the inspector general cleared the acting secretary.

While the Air Force pursues the souped-up F-15EX, Wilson has been outspoken about the service’s desire to move forward with the joint strike fighter. “The Air Force is all in on the F-35. It is a complete game-changing aircraft,” she said. “It is not just an aircraft, it is an information-fusion engine.”

A Defense Department cost analysis showed that over the course of a year, fifth-generation aircraft are more expensive to operate and maintain than four-generation aircraft, which affected the decision to buy fewer F-35s and the eight F-15EX, the Pentagon official said. “We can simply buy more capacity with a mix of planes that appropriately matches the mission set than we can if we went into a full fifth-gen portfolio.”

Aboulafia said he believes Congress will go along with the proposal for now. However, it’s unlikely the Defense Department will seek to purchase the F-15EX after Trump leaves office, he added.

The fate of the F-15EX could therefore be partly dependent on the outcome of the 2020 presidential election.

As a "missile truck/arsenal fighter (carrying 20+ AAMs)I believe it would do well. Against the J-31: who knows?

New F-15EXs are needed for CONUS ANG replacements of F-15C/Ds! They have greater range and loiter than F-35s. Better yet, pursue the Japanese hybrid F22/F35 and add those as the additional stop gap units until the next gen comes along.

James Quigley at 12:02 AM
Re: Fighting Over Fighter Jets: Pentagon Plan to Buy F-15EX Sparks Controversy

I think the best summation I’ve read from an online comment was this: “The F-35 is offensive and the F-15X is defensive.” That simple sentence explains a lot because sometimes the USAF just needs a fighter plane to get into the air devoid of the complex stealth skin maintenance issues. One would need a fighter sitting “Scramble ready” on the tarmac rain, shine, sleet, and hail, and not a “Hangar queen” that can’t be exposed to the elements. The F-15X is really needed to fulfill this role. If any calamity grounds the F-35 fleet, USAF CONUS NORAD falls to the few F-22s and F-15s and F-16s. The F-15Xs fulfills the role for defense until the Sixth Generation Fighter.

And the F15x can be fielded to current F15c units without expensive new hangers, ground equipment and retraining of the maintenance troops. Deployment of the F35 is already dominating all MILCON for the CAF. Also, the JSF Caucus is using the wrong language...while the F35 is a SEAD/DEAD machine it is most definitely not Air Dominance (or CAS). Those roles are filled by the F22 and the F15.