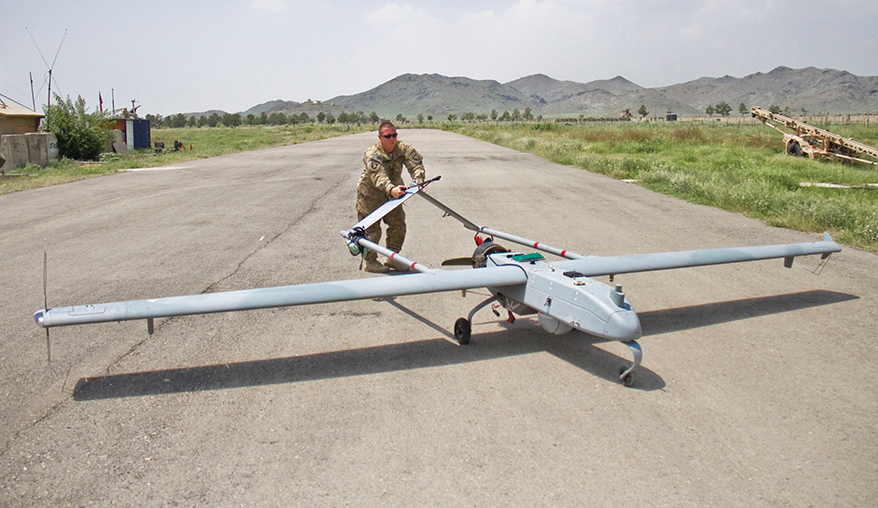 An unmanned aircraft system maintainer moves a RQ-7 Shadow to the pneumatic launcher prior to takeoff.

The Army is moving to find a successor for its RQ-7 Shadow tactical unmanned aircraft system, a drone it has long used for intelligence, surveillance and reconnaissance missions in Iraq and Afghanistan.

The change comes at a time when the service is seeking to modernize its equipment through its recently created Army Futures Command. To pursue these changes, the service set up multiple cross-functional teams to pursue its top modernization efforts, which include long-range precision fires, next-generation combat vehicle, future vertical lift, the network, air-and-missile defense and soldier lethality. The Shadow replacement falls under the Army’s future vertical lift team, the main initiative of which is to upgrade the service’s helicopters with clean-sheet design systems.

Brig. Gen. Walter Rugen, the director of the FVL cross-functional team, said the service is employing a “different kind of construct” to replace the Shadow, which is made by Textron Systems. Rather than pursue a developmental process, the service is leveraging other transaction authority agreements. OTAs are a contracting vehicle revised in the 2016 National Defense Authorization Act to help cut through bureaucratic red tape. Such an approach will allow the service to examine competitive prototypes and offer a production contract if desired. This approach is more efficient than the traditional acquisition system, Rugen said in an interview with National Defense.

The Army sent out a request for proposals to industry to pursue these prototypes at the end of September.

“We feel like we don’t need to necessarily develop a Shadow replacement,” Rugen said. Because of UAV advancements in industry, the Army felt companies already have options that meet its needs.

Although the service is still deciding on its requirements for the new system, it is currently pursuing three main features. These include a better acoustic signature, runway independence and the ability to be transported in organic assets, such as the CH-47 Chinook, Rugen said.

These initial requirements stemmed from an operational needs statement from the I Army Corps and the XVIII Airborne Corps, he said.

The Army held its first fly-off in December and January at Dugway Proving Ground, Utah.

The service downselected to two vendors, Rugen told reporters at the Association of the United States Army's Global Force Symposium in Huntsville, Alabama. The chosen companies were Martin UAV LLC based in Plano, Texas, and Textron's AAI Corp. based in Hunt Valley, Maryland.

Each vendor was awarded a $99.5 million indefinite-delivery/indefinite-quantity contract over a three-year period, according to the service. The contracts include six platoons worth of systems. The systems include air vehicles, terminals, trucks and ground support.

The demonstration will go a long way toward an acquisition decision, Rugen said. The service is using a “buy, try, decide” acquisition strategy, he noted. “We’re going to be very disciplined in our approach to make sure we have accurate data [and] accurate feedback from all the soldiers.”

The six systems are expected to inform an acquisition decision later down the line, he noted.

“In an ideal sense, we may find something that is just so superior that we start the [acquisition] process, but I think the ‘decide’ piece is still in FY ‘20,” he said. “If we decide, then we’ll move from there.”

The requirement for a runway-independent system will allow soldiers to operate in more austere environments that are not easily targeted by adversaries, he said. That capability will make the Army more protected and more survivable “because we’re going to be much harder to find,” he said.

Additionally, “industry has been innovative and we want to capitalize on that,” he said. “Runaway independence is obviously very valuable to us because … when you look at our MDO, or multi-domain ops, concepts, we want to be away from areas that are easily targeted by enemies’ capabilities ... that can reach some of our staging bases.”

However, that requirement does not necessarily mean the system must have a vertical take-off and landing capability, he said. That is a feature the service has previously pursued for its unmanned aerial vehicles, but has not implemented in full. For example, the service in 2012 canceled plans for Boeing’s A160T Hummingbird, which was scheduled to deploy to Afghanistan while carrying the autonomous real-time ground ubiquitous surveillance wide-area sensor.

The Army also intends to upgrade its fleet of UAVs to employ advanced teaming techniques. Rugen said the service is gearing up to develop a “future vertical lift ecosystem” that takes this teaming “to the next level.” For missions that require unmanned platforms, the Army will likely have a “heterogeneous” fleet in which more than one type of aircraft can perform a mission, he noted.

“When we talk about how are we going to detect, identify, geo-locate and report our pacing threats to find, fix and finish them with long-range precision fires … with joint fires, UAS has a big piece of that mission,” he said. “We’re going to have quite a few capabilities out there in the joint force and then the Army force.”

The Army envisions pairing the Shadow replacement with both the Apache attack helicopter and the future attack reconnaissance aircraft, he said. The Shadow currently works alongside the Apache.

The request for proposals for the new aircraft was released in October. Rugen said the Army will build an aircraft that is optionally manned, able to “hide in the radar clutter” and operate in the narrow pathways of megacities. The RFP stated the aircraft will be fielded at echelons above the division level; however, variants could be used for multiple aviation formations.

The service will downselect to two vendors for the future attack reconnaissance aircraft in March 2020 and selected companies will build systems for a government-sponsored fly-off at the end of 2023, he said.

For the current version of the Shadow, Textron Systems is working on a block III upgrade. The company received a contract for the upgrades in 2017, David Phillips, the company’s senior vice president and general manager, said in a statement.

The upgraded configuration has enhancements that allow it to perform better in adverse weather conditions and includes the installation of a new water-cooled engine, he said. The engine is expected to decrease the drone’s acoustic signature and boost its power, he added.

This configuration will allow the Shadow to “better support its manned aircraft counterparts in Army aviation,” he said.

The Shadow surpassed one million flight hours in May 2016, according to the company. About 85 percent of the hours were performed during combat operations.

The Army plans to use the Shadow through the late 2020s or early 2030s, the company said.

In August, the service demonstrated an air-launched unmanned aerial vehicle from a Black Hawk at Yuma Proving Ground, Arizona, he said. The UAV was flown from both the inside of the helicopter and from the ground. The effort will be further expanded in May at Yakima Training Center, Washington, he noted, where the systems will face a complex enemy obstacle and attempt to demonstrate a robotic breach. Plans include launching up to two UAVs from a Black Hawk and controlling the systems from both the air and the ground, he said. This will help “further refine our concepts in our efforts,” Rugen added.

Army Undersecretary Ryan McCarthy said in March that future vertical lift is one of the service’s top near-term priorities. In the future year defense program, FVL is slated to receive $4.7 billion, $800 million of which is included in the 2020 request, he said. McCarthy noted the goal is to develop new aviation platforms that have “greater speed, maneuverability and lethality.”

Increasing numbers of vehicle-related shootings have created the need for armor that goes beyond strictly military applications.