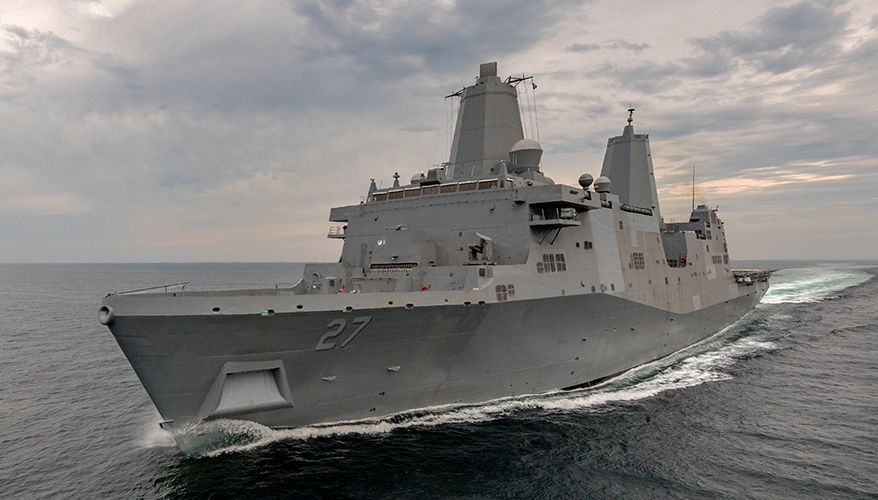 The Navy has recently announced its second flight of LPD-17 San Antonio-class amphibious transport docks, one of which will include a new laser weapon system, a service official said.

The latest ship commissioned from the fleet was LPD-27 — the USS Portland. The Office of Naval Research is currently upgrading the ship to host new laser weapon technology.
Metcalf called the directed energy weapon, formally known as the AN/SEQ-3 laser weapon system, “next-generation,” comparing it to the laser weapon systems installed on USS Ponce in 2014.

The add-on should integrate into the ship seamlessly, he said, because the LPD-17s were originally conceived and designed to have a similar weapon capability.

The weapon system “never came to fruition, but that space and weight had been preserved all the way up through and including LPD-27. So there’s really … a vertical launch system trunk that was never filled,” Metcalf said.

The upgraded technology is currently being tested in San Diego, he said.

“The goal is to get the installation done and the testing done this fall, and to deploy that system in 2020 on LPD for the very first time,” Metcalf said.

Originally, the USS Portland was slated to be the last ship in the fleet. However, Congress added three ships over the last three successive years to the LPD-17 program, Metcalf said.

LPD-29, the USS Richard M. McCool Jr., is set to be upgraded with Raytheon’s Enterprise Air Surveillance Radar, a new 3D enterprise radar system, Metcalf said. The system is an upgrade from the AN/SPS-48 currently installed on San Antonio-class ships.

LPD-30 will be part of the second flight of the ships.

“We officially got permission from [the assistant secretary of the Navy for research, development and acquisition] to do a second flight of the LPD program. So it is LPD-17 flight II,” Metcalf said. Flight II is programed to include 13 vessels.

The program’s end goal is to deliver 26 San Antonio-class ships, he said.

Directed Energy Weapons: Can the Pentagon and Industry Deliver?