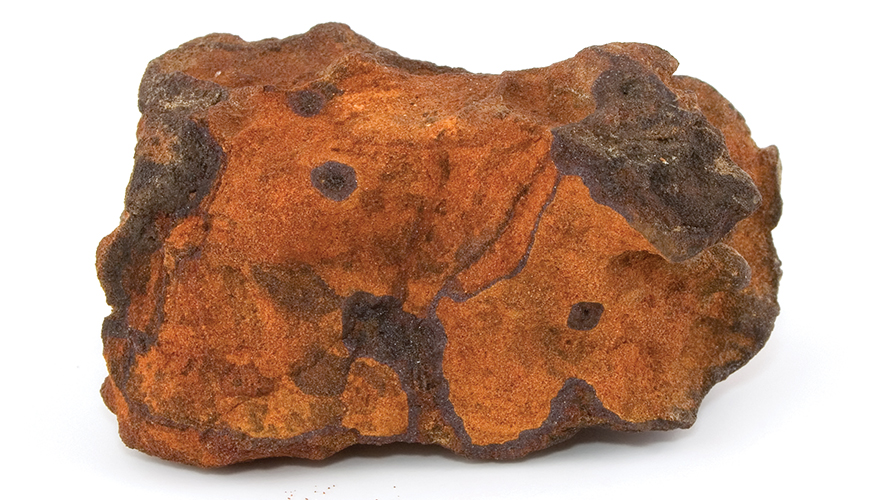 This is an appalling story of a long-running U.S. economic and national security failure that has put the nation behind China on many next-generation weapon systems while stifling the economy.

Meanwhile, China’s advances are largely built on its unparalleled commitment to leading the world in rare earth resource production, refining, material science, metallurgy, intellectual property, research and development, and commercial and defense applications. Rare earths are 17 elements on the periodic table that are now critical components in most modern technologies and weapon systems.

The U.S. rare earth supply chain was first compromised in 1980. A Nuclear Regulatory Commission and International Atomic Energy Agency change in regulations — “Part 40: Domestic Licensing of Source Material” — inadvertently ushered in the transfer of all aspects of U.S. rare earth industry to China.

Prior to that, heavy rare earths came from thorium-bearing byproducts of commodities such as iron ore, titanium, zircon or rock phosphate. Companies that mined these minerals could extract the rare earth byproducts and make a little extra profit. Once anything containing thorium was considered a potential source of nuclear fuel and highly regulated, that ended. Due to the costs and liabilities, these mining companies diverted these rare earth resources into their mine tailings as waste and buried them.

This had a profound impact on rare earth production in all NRC/IAEA compliant countries. China is an IAEA observer, but not a signatory to its agreements.

Today, the disparity between China and the United States continues in part because the Pentagon, government agencies, and the finance and mining industries measure the extraction of rare earths at the mining and oxide production level. Hundreds of rare earth mining projects outside of China have been initiated, giving the erroneous impression that Western rare earth dependence on China may be declining. However, most ultimately fail.

Out of more than 400 rare earth startups publicly listed in 2012, less than five reached production. Of those, only two reached significant volumes. Of those two, one is bankrupt and resurrected with Chinese financing and the other lost its operating permit for a short period.

During this time, China has taken significant equity and debt positions in many of these failed or faltering projects and will control them if they begin production.

Also, reporting solely on mined rare earths or purified oxides distorts government policy decisions because these materials have no significant technology or defense application until they are refined into metals. Only China has the capacity to do that. In fact, every non-Chinese rare earth mine ships its concentrates, or high-value oxides, to China for processing into rare earth metals, alloys, magnets and other high-value materials.

Few if any U.S. policymakers understand these subtleties. Most would be stunned to learn that China could shut down nearly every automobile, computer, smartphone and aircraft assembly line outside of China if they chose to embargo these materials. The same applies to all rare-earth dependent U.S. and NATO weapon systems. These supply chains can be cut. Western military procurement thus is under Chinese control.

Despite this, government reports and assessments have not made these determinations because they accept statistics on rare earth mining and oxide production as a proxy for metals, alloys, magnets, garnets and other post-oxide rare earth materials. There is no contingency in case of a crisis. 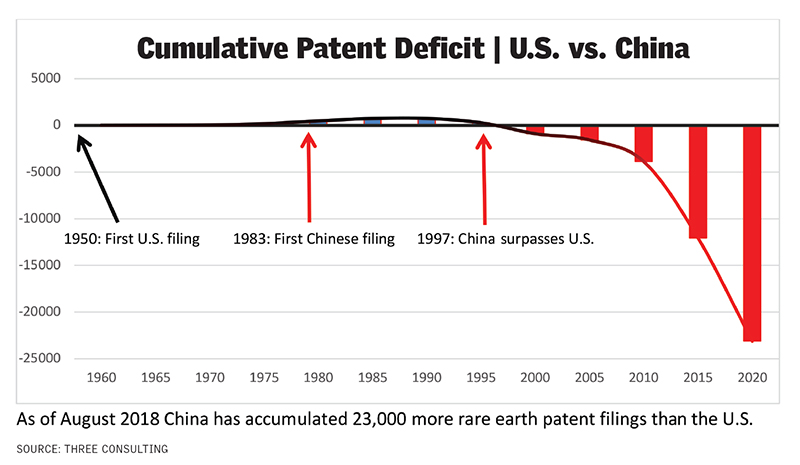 Most of these named materials are not stockpiled by the Defense Logistics Agency. The U.S. government sold off its entire strategic reserve of rare earths between 1994 and 1998. The agency’s strategic reserve now holds only small amounts of rare earth oxides and dysprosium metal. None are in a form that can be directly utilized by our defense industry. The GAO reported that these materials would need to pass through a Chinese supply chain in order to be utilized.

All rare earth metals, alloys and magnets used by U.S. defense contractors and technology firms can be traced back to China: directly or indirectly through Japanese sourcing or via U.S. alloy and magnet fabricators.

According to a July 2014 Defense Department Inspector General report, “Procedures to Ensure Sufficient Rare Earth Elements for the Defense Industrial Base Need Improvement,” the Pentagon is incapable of properly monitoring rare earth inputs at the component and subcontractor level. Worse yet, it was clear from the report that no one in the Pentagon differentiates between rare earth oxides — with no defense applications — and the post-oxides materials needed for the defense systems — and none bother to ask where these materials come from.

Why? Because the Pentagon and others continue to evaluate U.S. national security supply risk on the basis of global rare earth oxide production. Risks to the downstream manufacturing supply chain are simply ignored.

After 10 years of raising the alarm on this issue with members of Congress, the Defense Department and two administrations, too few understand the risks we are facing.

U.S. policymakers believe that technology leadership is the country’s greatest strength, both economically and for national security. But this is no longer true as it relates to rare earths. Therefore, ThREE Consulting commissioned a worldwide rare earth patent filings survey. Patent filings are a reasonable proxy of potential next-generation weapon systems and other technology that could be in China’s pipeline.

At no time over the last 40 years was China’s rare earth production, or its growing number of rare earth patents, listed as an issue of serious concern by the Pentagon in any of its past manufacturing and industrial base policy reports, reports to Congress on China threats, or acquisition reports.

Finally, a recent report ordered by the White House acknowledged the problem. “Assessing and Strengthening the Manufacturing and Defense Industrial Base and Supply Chain Resiliency of the United States,” stated that “China represents a significant and growing risk to the supply of materials deemed strategic and critical to U.S. national security.”

For the Pentagon and defense contractors the last few decades have been good: ever larger budgets and soaring stock prices. China, however, used this time to set the groundwork to overtake and displace the West. Beijing’s commitment to direct and indirect funding of rare earth research and a forced technology-transfer strategy has paid off.

China’s advances are quickly altering the global balance of power, and its future will be in its hands. For example, directed energy weapons will alter or control military outcomes in the future, according to military experts. However, every single directed-energy weapon also requires heavy rare earths and highly advanced material science capabilities. China controls U.S. access to these materials. All of this plays into China’s current strengths in these fields, suggesting that the nation will eventually lead the world in the development and deployment of direct energy weapons.

This is bad news for Pentagon experts whose central plan for continued U.S. security was based on continued technology leadership. China has boldly crossed this threshold in plain view of the Pentagon’s classic three-monkey observation team. And apparently, there is no backup plan.

Solutions to overcoming China’s stranglehold over the economy and national defense are circulating in the Senate and exist within the administration. It’s past time to stop the rancor inside the Beltway and get back to governing.

James Kennedy is president of ThREE Consulting and works on critical materials, energy and national security policy issues at the federal level. He is the subject of the book “Sellout” by Victoria Bruce.

Correction: a previous version of this story misspelled Victoria Bruce's name in the author's biography.

The lack of interest and understanding of this issue is astounding. Rare earths are critical to nearly all next generation weapon systems and China dominates this space. Due to a lack of diligence, reporting and curiosity this fact is largely ignored despite the abundance of documentation. Examples as follows: Quantum Systems: China has developed and deployed quantum computing, quantum satellite technology and quantum radar technology (here, here, here, here). Quantum computing is a rare earth dependent technology (here). Kinetic: China had developed and deployed kinetic weapons like the rail gun (here, here, here) and is developing other kinetic systems such as magnetized plasma artillery (here). Kinetic weapons are rare earth dependent. Hypersonic: China has developed and tested hypersonic weapons. China has the world’s largest hypersonic research facility (here, here, here). All hypersonic propulsion systems are dependent on rare earth alloys. Space Force: China developed, tested and deployed (here) ‘space force’ weapon systems prior to 2007 (here). Rare earths are used in all directed energy weapons, secure communication systems, alloys for supersonic and hypersonic vehicles and directional control functions for all precision missile guidance systems. Directed Energy: China has developed and deployed directed energy systems (here) and controls U.S. development and deployment of rare earth dependent directed energy weapons through its control over rare earth resources, metals, alloys, magnets and other value added materials (here). Nuclear Powered Systems: China plans on developing next-generation nuclear energy systems, including the development of nuclear-powered mega-drones and other energy based weapons (here, here, here). Current and next generation nuclear technology requires rare earth materials in the fabrication of control rods, radiation shielding and other functions. All of these systems are rare earth dependent and the Pentagon has obstructed a solution to resolving this issue for over a decade. I know because I went to them 10 years ago with the issue. I am the subject of a book that details my efforts to inform the Pentagon, Congress and the last two administrations (see SELLOUT by Victoria Bruce). James Kennedy ThREEConsulting.com 314.494.1638 For more details on China's leadership in next gen weapons see: https://www.linkedin.com/pulse/how-china-displaced-us-leadership-weapons-technology-james-kennedy/