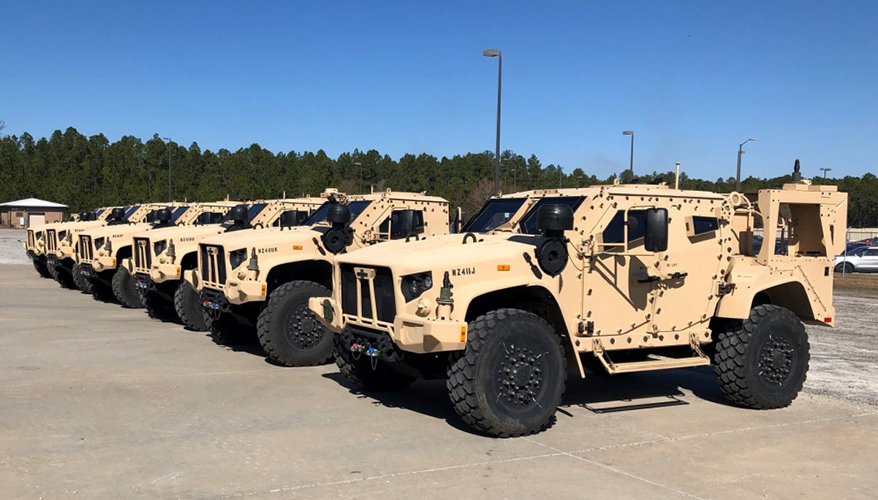 The Army may cut back on its acquisition plans for the joint light tactical vehicle to invest in higher priority modernization efforts, a top service official said March 13.

The Army intended to acquire more than 49,000 platforms over the next 20 years at an estimated cost of $28 billion. The systems were slated to replace about half of the Humvee fleet. But those plans could soon change, Undersecretary of the Army Ryan McCarthy said at the annual defense programs conference in Washington, D.C., hosted by McAleese & Associates and Credit Suisse.

The service is having to make “very hard choices” to free up money for its top six modernization priorities, and the JLTV program might be trimmed, he said.

“We have 55,000 Humvees in the fleet today, 49,000 JLTVs [planned]. We have another 800 infantry squad vehicles,” he noted. “We clearly have more capability than we need. We're locking in on that number.”

During a brief discussion with reporters after his remarks, McCarthy declined to say when an announcement about potential JLTV cuts would be made.

Speaking later at the conference, Lt. Gen. James Pasquarette, deputy chief of staff, Army G-8, said the current plan is to procure the same quantity of JLTVs but at a slower rate to free up money.

"We're still planning on buying the same number, it's just going to be stretched out to the right," he said.

In the Army’s future years defense program, which encompasses fiscal years 2020 to 2024, planned funding for the high priority modernization efforts was increased by $32.8 billion from $24.2 billion to $57 billion, according to budget documents.

The service wants to procure 2,530 JLTVs in 2020, 863 fewer than in 2019. The system is currently in low-rate initial production. The Army has delayed a full-rate production decision from December 2018 to later this year.

The Pentagon’s Director of Operational Test and Evaluation Robert Behler identified shortcomings with the platform in his annual report for 2018, saying the vehicle had deficiencies in reliability and maintainability. The Army has said that those issues have already been addressed or are being addressed. JLTV manufacturer Oshkosh Defense said the platforms meet all requirements and it does not expect delays in fielding.

Observers have been speculating that the joint light tactical vehicle program could fall victim to funding realignments as the Army pursues its top six priorities. The service aims to cancel 93 programs and reduce or delay another 93 to pay for the initiatives.

Pasquarette said with an exception or two, the programs eliminated in the five-year defense plan were relatively small efforts that were deemed to have little role to play in potential future fights. The programs that would see reductions in the proposed budget are "where the big money is," he said.

Other major programs that will be affected by the funding realignment across the five-year spending plan include the Chinook helicopter and the Bradley fighting vehicle, as future vertical lift systems and next-generation combat vehicles move through the development process, McCarthy said.

“We've synchronized the buys, if you will, with the investment portfolio,” he said. “Whether it's in armored vehicles or helicopters, [at] the back ends of the FYDP you'll see the synchronization with new weapons systems being brought on.”

The Army plans to stop buying the Bradley in future years. “We are going to stop at a five brigades for the Bradley A4 [configuration] and synchronize that in 2023 with the next-generation combat vehicle,” he said.

Pasquarette said the armored multi-purpose vehicle, or AMPV, would suffer the same fate as the JLTV under the service's new plans. "We're taking longer to buy the same amount," he said. "There was a lot of money there and we thought it was acceptable for us to take some of that money, stretch it out to the right and to apply the delta there against the modernization priorities," he said.

The Army’s aviation budgets will be strained in the coming years if the service continues buying legacy platforms as it tries to modernize its fleet, McCarthy noted.

“It's going to start to really compress the portfolio's ability to continue to finance, to keep all these assets in the system,” McCarthy said. “We went through and did a thorough exercise on the aviation portfolio and we have 10 percent more Chinooks on the books today than we need.”

The Army intends to continue buying the helicopter through 2020 for the conventional force. Beyond that, the service would only procure the system for the special operations component, he said.

“We're going to really make a go of it for FVL across this FYPD and bring these new assets online,” McCarthy said.

In recent years, the Army’s acquisition funding mix has been about 80 percent for legacy systems and 20 percent for development systems. If Congress funds the service’s new budget plans, the mix would change to about 50-50 by 2024, he noted.

Update: This story has been updated to include remarks from Lt. Gen. James Pasquarette.