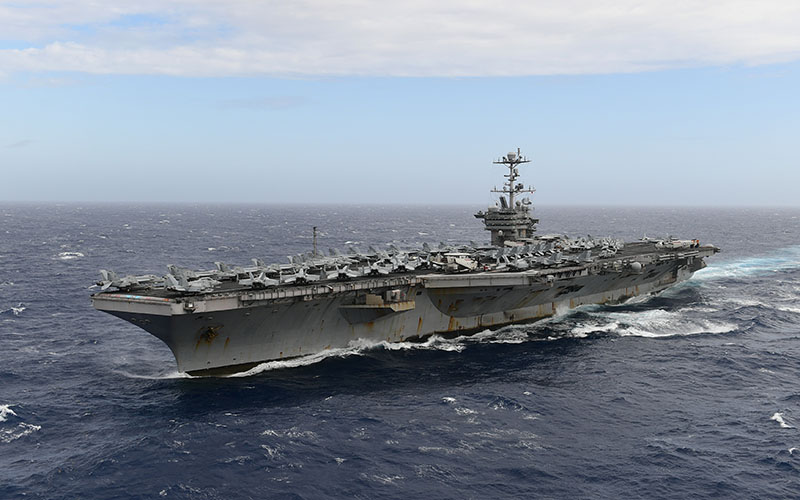 President Donald Trump’s fiscal year 2020 budget request would increase the Navy’s overall budget but cut back on its shipbuilding and aircraft procurement accounts, according to documents released March 12. Despite that, however, the service is asking for 12 new battle force ships in fiscal year 2020.

In the request, the Department of the Navy — which includes both the Navy and the Marine Corps — would receive a topline of $205.6 billion which is a 4.8 percent increase from the enacted fiscal year 2019 budget. It also calls for an enormous growth in overseas contingency operations funds totaling $4.7 billion, which is more than 450 percent times greater than what was enacted in fiscal year 2019. That is a way both the executive branch and Congress have gotten around military spending limits imposed by the 2011 Budget Control Act caps.

The Navy’s budget is focused on building a service that is ready for great power competition, said Rear Adm. Randy B. Crites, deputy assistant secretary of the Navy for budget.

“Our seas are more heavily used, are more stressed and more contested than ever before,” he said during a briefing at the Pentagon. “The competition is clearly on. We know that both Russia and China are fielding high-end military capabilities. … For us to be able to compete in that environment we need to be bigger, we need to be better and we need to be more ready.”

The Navy plan is for the battle force ship inventory to steadily increase in quantity from 288 in early fiscal year 2019 to 314 in 2023, with a goal of 355 ships by 2034, budget documents said. Crites noted that the Navy plans to release a 30-year shipbuilding plan next week that will provide specifics on how that will be achieved.

“The CVN 80 and CVN 81 were awarded as a two-carrier procurement,” budget documents said. “Awarding the two carriers together is estimated to save the department $4 billion compared to the Navy’s original cost estimates for budget CVN 80 and CVN 81 separately.”

However, the budget request also made the decision to retire the USS Harry S. Truman aircraft carrier.

“We made the difficult decision to retire CVN 75 in lieu of its previously funded refueling complex overhaul that was scheduled to occur in FY 2024,” the budget document said. “This adjustment is in concert with the Defense Department's commitment to proactively pursue diversified investments in next generation, advanced and distributed capabilities, including unmanned and optionally manned systems, and to provide a strong industry demand signal for the same. This approach pursues a balance of high-end, survivable manned platforms with a greater number of complimentary, more affordable, potentially more cost-imposing, and attritable options.”

Thomas Callender, senior research fellow for defense programs including naval warfare and advanced technologies at the Heritage Foundation, a Washington, D.C.-based think tank, said he disagreed with the move to retire the aircraft carrier early.

“The Navy is still doing their new force structure assessment so they don't even have their own assessment that says, ‘Yes, we can do with less carriers,’” he said.
In his own assessment — which he released in the fall — Callender said there was a need for 13 carriers. That is backed up by recent testimony by commandant commanders suggesting that more carrier presence is needed, he added.

"The demand signal is out there, and the last true analysis said, ‘You need more than you currently have,’” Callender said. “That kind of runs counter to that.”

The move could suggest that the office of the secretary of defense thinks carriers are not survivable in a high-end fight with a technologically advanced adversary, he noted.

The Trump budget would give the Columbia-class submarine — the Navy’s No. 1 priority — $533 million in fiscal year 2020 in research and development dollars. That would “continue to focus on the propulsion plant, nuclear technology development, common missile compartment design and prototyping, and platform development technologies like the propulsor, strategic weapons system, and maneuvering and ship control.”

The budget document notes that this is a decrease from fiscal year 2019 as Columbia moves from contract design to detailed design.

Callender noted the proposed budget would delay one of the service’s LPD Flight II amphibious vessels which was originally planned to be purchased in fiscal year 2020 to fiscal year 2021.

Analysis will still need to be done to see how that will affect shipyards and if there would be any efficiency changes. However, “it’s one year [so] it’s probably not going to be as major as if it was going to be a multi-year delay,” he added.

“We're expanding on our unmanned capacity as we move towards a more distributed, lethal and cost imposing force as the future of conflict is changing,” Crites said. “These investments help us expand the competitive space that we're operating in.”

The president’s budget would also fund MQ-4C Triton unmanned aerial vehicles. The budget calls for the purchase of two systems in fiscal year 2020 — one fewer than fiscal year 2019 — but would include a total of 17 over the future years defense program (FYDP).

In total, the budget would fund 44 robots across the surface, undersea and air domains in fiscal year 2020 which is six more than fiscal year 2019. Over the FYDP, it would include 232 systems.

As for aircraft, the service is requesting an increase of F-35C joint strike fighters, which would grow by five aircraft over fiscal year 2019 for a total of 20 in fiscal year 2020. Over the future years defense program that would include 120 systems.

The service would also decrease its purchases of E-2D AHE Hawkeyes from six to four between fiscal year 2019 and 2020 and its purchase of P-8As Poseidon from 10 to six in that same timeframe. F/A-18E/F Super Hornets would remain steady at 24 from fiscal year 2019 to fiscal year 2020 but climb to a total of 84 systems over the FYDP. “Our multifaceted strategy to sustain and recapitalize the strike fighters is reliant on fulling funding sustainment accounts, reducing strike fighter utilization, and procurement of additional F/A-18E/F and F-35B/C aircraft,” the budget document said.

Callender said a smaller procurement budget for aircraft was not surprising. “They had some aircraft programs that were hitting the end of their” production, he said. These include the Poseidons and Hawkeyes. “Both of those are ramping down.”

But the same time there was no acceleration in purchasing other aircraft such as the F-35C or Super Hornets, he noted.

“Our budget request provides significant investment toward innovation to deliver better forces both today as well as in the future,” Crites said. “We are providing for longer range in hypersonic weapons and increasing investments in areas like conventional prompt strike as well as the standard missile family of missiles.”

Crites also noted that the Navy’s preferred munitions would increase in the fiscal year 2020 request and its weapons budget would grow by 16 percent over fiscal year 2019.