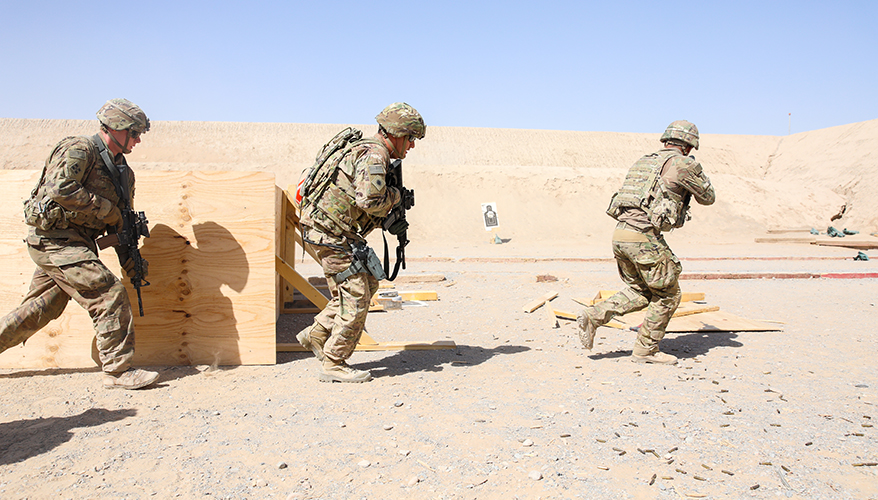 Eager to reduce the weight burden for dismounted troops, Pentagon researchers and others are working on new body armor that is expected to be lighter than legacy systems, without sacrificing survivability.

Ground troops sometimes carry upwards of 90 pounds of gear, according to a recent report by the Center for a New American Security titled, “The Soldier’s Heavy Load.” Much of that stems from personal protective equipment.

Military leaders are well aware of the problem.

To get at the problem, the service is in the process of replacing its legacy equipment with a new soldier protection system.

“The SPS improves the level of mobility, form, fit and function for male and female soldiers and provides a significant reduction in weight” while enhancing protection, she added.

The equipment will include subsystems and components manufactured by a number of industry partners including: protective inserts for vital torso protection; a modular scalable vest, ballistic combat shirt and blast pelvic protector for torso and extremity protection; an integrated head protection system; and transition combat eye protection.

The Army will continue to procure and field the soldier protection system components in fiscal years 2019 and 2020, while working with industry and academia to assess and mature new technologies that could reduce weight and improve survivability, Whitehead said. In fiscal year 2020, the service anticipates moving forward with the next-generation integrated head protection system, she noted.

Meanwhile, the Marine Corps is looking for better ways to protect its dismounted troops. A key component of that effort is the development of the Plate Carrier Generation III.

Today, a Marine will typically carry approximately 25 to 28 pounds of body armor including the carrier, soft armor and hard armor plates, according to Flora “Mackie” Jordan, lead engineer for the infantry combat equipment team at Marine Corps Systems Command.

Nick Pierce, individual armor team lead at MCSC, said the PC Gen III is 25 percent lighter than legacy equipment. The new plate that will accompany it will make the total system about 38 percent lighter.

“When you put those together, you’re really taking almost 10 pounds off of a large-size Marine,” he said in an interview.

“The soft armor actually stopped some additional rounds that the old armor didn’t stop,” she said. “We really capitalized on a lot of technological improvements that were made in industry in the past couple of years.”

For example, “they didn’t need these super wide shoulders, so we cut it out so they could have a better rifle stock when firing their weapons,” Jordan said.

Two companies — Vertical Protective Apparel and Armor Express — are manufacturing the components of the new plate carrier. Last year the Marine Corps awarded an indefinite-delivery/indefinite-quantity contract for up to 225,000 systems.

Fielding will start in the summer of 2019, and all Marines are expected to eventually transition to the PC Gen IIIs, Pierce said.

A separate solicitation went out in November for a lightweight plate insert to go in the new carrier. The Marine Corps expects to begin fielding it in the summer of 2020, Pierce said.

“We’re also already looking forward to a new helmet that we’re doing research and development on now that would better integrate a lot of the new [head-worn] systems” that are available such as hearing protection, communications and optics, he said.

The Marine Corps has been examining prototypes. A new solicitation for the helmet is expected in 2019, and the service aims to begin fielding the gear in fiscal year 2022. The Marine Corps expects the systems to be lighter weight and offer better protection than current helmets, he said.

Meanwhile, officials at the Army Research Laboratory and Natick Soldier Research, Development and Engineering Center, are looking further down the road at other technologies that could play a key role in future systems.

ARL conducts basic research that could lead to major breakthroughs.

“Our No. 1 goal has been lightening body armor,” said Chris Hoppel, chief of the laboratory’s soldier protection sciences branch.

A major focus of research efforts is to develop ways to reduce weight while improving ballistic protection against advanced threats that currently overmatch body armor, he said. Officials at the lab are also working on increasing blunt impact protection for the head to prevent traumatic brain injuries.

“Ceramics are probably the most important material for body armor right now because they have a couple of unique features,” he said. One is that they are lightweight. For example, a ceramic plate made out of boron carbide is about one third the weight of steel, he noted. Ceramics are also hard, meaning they are effective at stopping incoming rounds.

“Hardness and compression strength are two big things that we have to have in this ceramic material, and that’s what makes them useful for body armor,” he added. “That light weight, that density [characteristic] is really what’s also a big key thing that ceramics can give you that metals can’t.”

However, the technology currently has some downsides, such as low fracture toughness, which puts them at greater risk of being damaged because they aren’t as good at absorbing energy from incoming projectiles, he explained.

Researchers need to find a way to increase the toughness of ceramics without sacrificing hardness and compression strength, he said.

The Army Research Lab is also investing in new materials such as boron suboxide.

“It’s theoretically harder than boron carbide, which is the material that we currently employ for body armor,” Vargas-Gonzalez said. “It’s about the same density, the same weight. So we’re looking at potentially a 30 percent improvement in hardness.”

A substance commonly associated with high-end jewelry is also of interest.

“Diamond is the hardest material that we have known to man that’s available. So there could be cases where we might look into actually including diamond particulates into body armor materials ... to maybe enhance the hardness,” Vargas-Gonzales said.

Commercial investment in synthetic diamond material is pushing the price down to the point where it might be cost effective for body armor use, he noted.

Blending materials could offer major advantages, Vargas-Gonzalez said. This has been demonstrated by industrial partners when they mixed materials such as boron carbide and silicon carbide together, he noted.

“The real function there is to be able to modify the material to improve its performance beyond the intrinsic behavior of the individual components,” he said. “Increasing the toughness, increasing the hardness, doing something that’s going to change the mechanisms of how the bullet interacts with the body armor — those are reasons why we want to go down that route and we are actively investing” in that area.

“If there’s something that shows promise at a basic research level, we will invest in it,” he said.

Natick is currently looking at new experimental materials with three industry partners that could offer greater strength, he said. He declined to identify the companies or the new materials.

The technology could potentially maintain the same level of protection that current body armor offers, while reducing weight.

“Our goal was to produce fibers which are competitive with the commercially available materials, but which are in a different size range with respect to the fiber diameters,” said MIT professor of chemical engineering Gregory Rutledge.

His research team has developed a technology called “gel electrospinning” that introduces electrical forces to conventional fiber spinning processes. These electrical forces provide another way to draw the fibers out so that they’re ultrafine, down to just a few hundred nanometers in diameter, he explained.

“When we measure their properties, they are pretty remarkable” in terms of strength, he said. “This is still very early stage research, but in the context of body armor if we can get the same performance with smaller fibers, then we may need fewer layers or at least thinner layers” to achieve a specific level of protection, he explained.

Natick had an effort that was looking at genetically modified silk worm that had spider DNA to improve fiber tenacity, DiLalla said. While that technology ultimately didn’t show great promise, it is an example of the avenues that Natick is looking to explore, he added.

Other things in nature like nacre shells are extremely tough because of their structures, Vargas-Gonzalez noted.

“If we see that happening in naturally-inspired materials, we would expect that at some point there would be some design aspects that we could probably employ in body armor to maybe achieve some of our goals,” he said.

Natick is also making a big push in the area of head protection. The center wants a helmet that can address next-generation ballistic threats from enemy rifles, without exceeding the weight of legacy systems. There are also initiatives to improve blunt impact protection.

“One of our big thrusts is looking at graded 3D-printed structures … optimized for the types of impacts that a soldier might see,” DiLalla said. Natick has contracts with vendors that are looking at that type of technology, he noted.

Army officials have emphasized the importance of collaborating with industry to advance their body armor initiatives and transition them into production. “Ultimately, they’re going to be the ones that make these body armor parts,” Vargas-Gonzalez said.