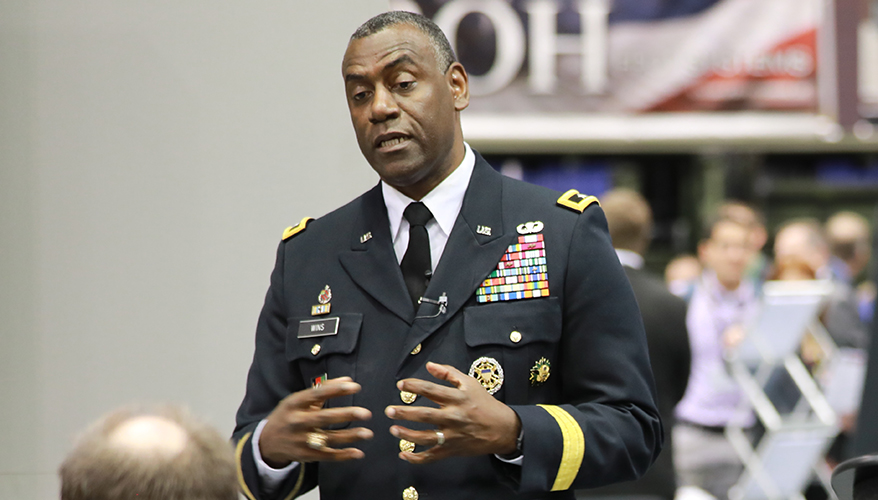 Maj. Gen. Cedric Wins is commanding general of the Army’s Combat Capabilities Development Command. CCDC was previously known as Research, Development and Engineering Command until it was officially renamed Feb. 3 and put under Army Futures Command, the organization responsible for spearheading the service’s top six modernization priorities. National Defense Managing Editor Jon Harper interviewed Wins on the sidelines of NDIA’s Tactical Wheeled Vehicles Conference in Monterey, California, to talk about the recent organizational shakeup and some of the key technologies that CCDC is focused on. The following Q&A has been lightly edited for length and clarity.

Q: What are some of the key technology areas under your purview that relate specifically to tactical wheeled vehicles?

A: The big one that I can highlight is the leader-follower [autonomous truck convey] technology. … When it comes to tactical wheel vehicles, we are kind of an adopted follower of technology. We're counting on industry because you’ve got the entire automotive industry — of which military vehicles is a subset — really kind of leading the way. But there are certain areas that we can kind of niche ourselves into the development things [like] leader-follower.

A lot of it is already being [developed] out in the commercial space. But the problem is different [for civilian users]. It's not as hard to develop the ability to navigate autonomously or similar autonomously on very well developed, improved roads where infrastructure is there, the lights are on, and so on and so forth. It becomes more of a challenge when you talk about going into an environment where … you have a lack of a road infrastructure.

Q: What are some of the things you would need to do to transform or adopt some of the emerging technology that's being developed in the commercial sector for a military context?

A: If you're talking about some type of artificial intelligence capability, we may have to build on the algorithms. There may be a certain set of algorithms that allow you to do certain activities and learn as you're performing those activities.

The network, for example, that's another area we largely know that going into the future, if we're going to be successful, we've got to be able to tap into what commercial [technology] is out there and available. But there may be a possibility that if we go into a conflict area that there is no infrastructure for a network to leverage; or as a result of the prosecution of conflict, we had to take out that network infrastructure. Well then how do you go forward and still be able to conduct operations? How do you make sure that the transmission of signals can't be easily interfered with or can't be easily decoded by a threat?

So those are the types of things that we find ourselves working in very, very specific areas to take what we have in commercial industry but make sure it has a military application and a military utility.

Q: RDECOM was just renamed Combat Capabilities Development Command. What are the implications for you? Was this basically just a name change? What is different now?

A: We have, I think, an impressive history of technology development for the Army. We have most recently 16 years of successes where we designing technology that would protect our soldiers; the ability to introduce things that were necessary for counter-IED operations, counter-hazard, integrated body armor and the technology associated with that to protect and save lives. Those were the things that we were focused on.

As an organization what we're seeing is in the future … we've got to be integrated in our efforts. And so I have seven research, development and engineering centers and [the Army Research Laboratory]. As they do their work, they have to be recognizing that their integrated effort is what brings about the technology that the warfighters really need. All too often, very similar to the lack of unity … that existed which led to the need for Futures Command within the S&T community, you had some of that [at RDECOM]. So as a command we are a unified command focused on research and development for the Army and engineering for the Army. And we provide that type of capability to the Army to deliver on technology that would produce [warfighting] capability.

Q: Does this organizational shakeup lead you to shift your priorities in any way in terms of your R&D?

A: What it does is it gives us perfect alignment of the technology efforts that we're doing to the largest degree towards the Army's modernization priorities. So I have people from my organization that are on the CFTs [the cross-functional teams spearheading modernization initiatives at Futures Command] … and they are a natural extension back to the larger part of the organization where the actual [development] work is going on to make sure that that alignment stays intact, and that that CFT director understands the technology that has been worked on, how that technology is progressing, and whether or not that technology will deliver on the modernization priorities that have been established for the Army.

Q: Will all of those research, development and engineering centers under your command now be more closely linked as part of this change?