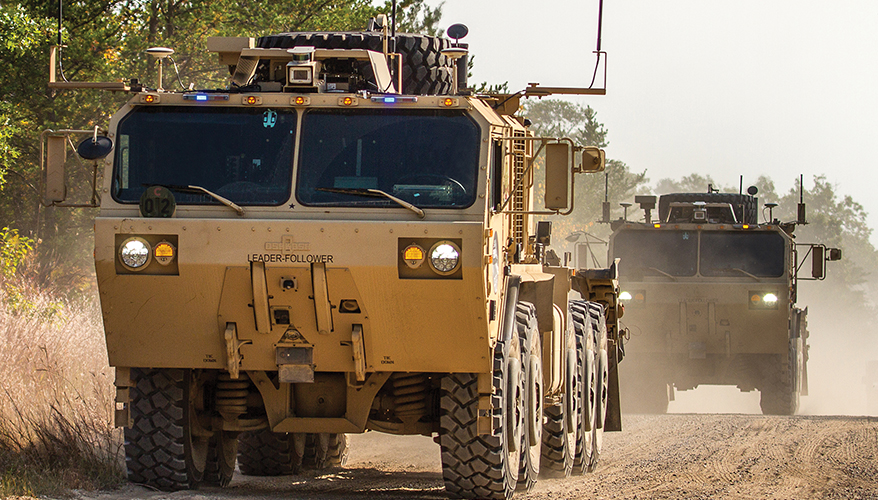 After years of exploring the technology, the Army is gearing up to turn its autonomous truck convoy demonstrations into a formal program of record.

The service has been pursuing the idea of having unmanned vehicles incorporated into its convoys for more than a decade, with the goal of reducing the number of casualties associated with ground resupply missions.

However, encouragement by Army leadership is accelerating the timeline for a leader-follower capability, Bernard Theisen, autonomous ground resupply program manager at the Tank Automotive Research, Development and Engineering Center, said in an interview.

Expedient leader-follower is a capability that allows for a convoy that contains one manned vehicle followed by unmanned vehicles. The initiative went to the Army Requirements Oversight Council, which decided to proceed with the capability in February 2018, he noted. After examining the technology at TARDEC, Army Secretary Mark Esper was so impressed that he asked to push the timeline forward, Theisen noted.

To kick off the initiative, the Army will issue optionally manned vehicles to two composite truck company units, he said. Thirty will go to Fort Polk, Louisiana, in September and 30 will go to Fort Sill, Oklahoma, in January 2020. They will replace a platoon’s worth of trucks at each installation, or half of each company’s total number of platforms.

This will allow the Army to compare the platoon of optionally manned vehicles to the platoon of manned systems to see if the new capability improves the unit’s performance, he said. “How does it change their tactics, techniques and procedures? These are some of the things we’re going to be looking at.” Following a yearlong operational technology demonstration, the service hopes to move the effort straight to Milestone C, he noted.

The capability is currently about an 80 percent solution for the Army’s needs, Theisen said.

“We fully admitted it’s not the whole solution. I don’t think anybody has the whole solution … for autonomy,” he said. “That’s why the Waymos and the Teslas and the Toyotas and the Fords and everybody else has tons of engineers and, frankly, [is] outspending the Department of Defense to try and solve these autonomy issues.”

The optionally unmanned trucks are currently undergoing testing in different environments, Theisen said. At the end of 2018, the platforms were being put through deep snow in Michigan. TARDEC made adjustments to account for a higher amount of wheel slippage than what was predicted, he noted. This year the vehicles will be moved to Fort Bliss, Texas, to be tested in a desert environment, he said. TARDEC plans to finalize the configuration in April 2019.

The systems need a cyber certification as well to ensure they can withstand attacks from adversaries, he noted. TARDEC has an outside group that conducts cyber attacks on the trucks to find potential weaknesses to correct, he said.

In the Army’s fiscal year 2019 budget request, the service sought about $93 million in research, development, test and evaluation funds for its robotics efforts, including leader-follower. The money for moving the initiative into a formal program of record is already built into the service’s program objective memorandum for future years, Theisen said.

One new capability TARDEC is exploring is “retro traverse,” which would allow the commander to back up the convoy if needed, he said. The trucks would automatically reverse by using the same path as before, which would reduce the chances of harm.

“Retro traverse would give the truck commander the capability to say ‘go back one kilometer’ or ‘go back 30 seconds’ so that you could hit that turn,” Theisen said. “It would automatically go back in the same tire tracks. That way, in case there was an [improvised explosive device] or a mine or anything like that, you wouldn’t have to worry about it because the vehicles already drove through.”

For expedient leader-follower, Oshkosh Defense received a $49 million contract in June 2018 to integrate autonomy kits onto palletized load system vehicles — which are also produced by the company. The contract includes 70 autonomy kits for program development and operational technical demonstrations with an option to procure up to 150, the company’s announcement stated.

These provide the soldier “a safer driving experience than the typical tactical wheeled vehicle and some of the safety features and convenience features that they have in their personal vehicles as well,” he noted.

A large-scale experiment for autonomous ground resupply is scheduled to be held in Michigan in September 2019, Theisen said. The initiative is a six-year effort with three two-year increments. The first was completed in 2017, the second is scheduled to wrap up in 2019 and the third is slated for completion in 2021.

One of the capabilities TARDEC is exploring for both autonomous ground resupply and expedient leader-follower includes waypoint navigation, Theisen said. That feature would allow a soldier to drive out to an area and have an autonomous vehicle run the same route. Alternatively, the soldier could plot the route for the vehicle on a map.

“You could have a vehicle with nobody in the front driving in waypoint mode, and then in the next three vehicles you could have soldiers maybe resting or rehearsing a mission” while riding in autonomous trucks, he added.

There are six prototype vehicles for the autonomous ground resupply effort as well, Beck said. For future increments, Oshkosh plans to work on additional features that will allow the trucks to be “fail operational,” he said.

“If there is some sort of a failure, if the vehicle is not dead in the water, it’s able to recover from that failure or deal with that failure in … a fashion that doesn’t prevent the vehicle from continuing its mission,” he noted.

Theisen said the technology will also assist in the Army’s next-generation combat vehicle initiative. NGCV is the service’s effort to develop a new set of combat vehicles that will replace the service’s current fleet. As part of the Army’s plan to modernize the force, a cross-functional team was set up to pursue this technology. The service plans to have an initial set of six experimental prototypes, which include two manned next-generation combat vehicles and four robotic combat vehicles, ready for delivery at the end of fiscal year 2019, the CRS report said. Hands-on soldier tests are scheduled for fiscal year 2020, and testing with a company-sized element is slated to run from fiscal years 2023 to 2024, the report said.

TARDEC is participating in the next-generation combat vehicle effort by building technology and writing software, Theisen noted. TARDEC initially began exploring the possibility of having one unmanned Humvee with a robotic weapon station paired with a manned Humvee, which would act as the controller. Since then, they have also begun using M113 armored personnel carriers, he said.

“The control Humvee would laser designate a target, just like in a normal operation, but instead of a manned gun team taking the target out, the robotic Humvee would,” he said.

The Army is also continuing its autonomous convoy work with the U.K. Ministry of Defence, he said. The coalition assured autonomous resupply, or CAAR project, is an initiative between TARDEC, the Army’s Armament Research, Development and Engineering Center, and the United Kingdom to demonstrate and test multiple emerging autonomous technologies for resupply missions.

As part of this effort, TARDEC and the U.K. are developing a “last mile” resupply capability, Theisen said. It is intended to provide the military with a smaller, more agile system that can complete the resupply mission if larger vehicles cannot traverse the terrain. This would require a vehicle that is similar to a golf cart, dune buggy or old school Jeep Wrangler-sized system that could be used in more austere training, he said. ARDEC is working on the concept using a smaller-sized unmanned aerial vehicle as well, he noted. Theisen said the U.K. Defence Ministry has downselected to a handful of teams to perform autonomous last-mile air and ground missions.

An operational demonstration for the coalition assured resupply project is scheduled for August at Camp Grayling, Michigan, he noted. It will be held in conjunction with the annual Northern Strike exercise, a live-fire event meant to foster collaboration between the United States and partner nations.

As an old M1A1 Engineer and Chrysler Automotive Engineer, the thought occurred to me that in addition to the "leader - follower / retro-reverse convoy" it might be good thinking to have an imbedded "optional leader" inside the convoy incase the leader is taken out....thanks for listening....