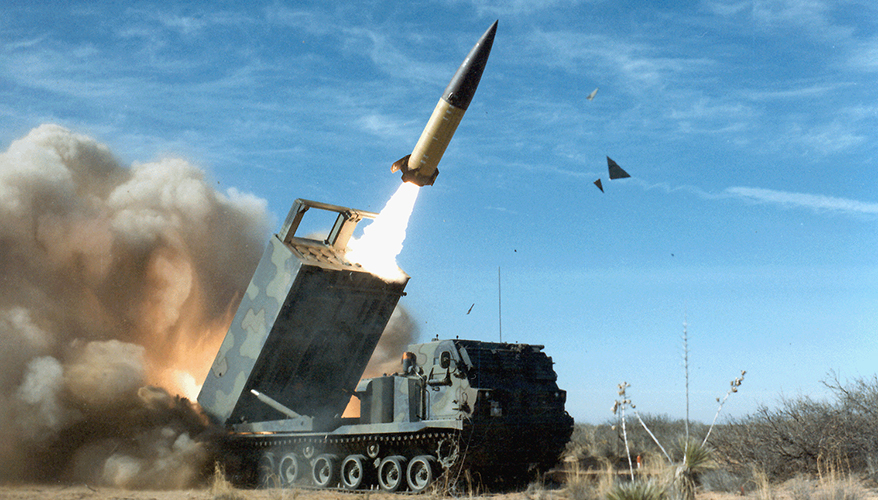 SIMI VALLEY, Calif. — New road-mobile missiles that are under development will fundamentally change the Army’s offensive capabilities, the head of the service said Dec. 7.

The types of systems in the works were previously banned under Intermediate-Range Nuclear Forces Treaty with Russia. The INF Treaty was brokered in 1987 in the waning years of the Cold War. It prohibited the United States and Russia from deploying land-based nuclear or conventional missiles — both ballistic and cruise — with ranges of 500 to 5,500 km.

However, Washington accused Moscow of cheating and the U.S. withdrew from the arms pact in August. The move made it possible for the Army to pursue road-mobile, conventional weapons with greater ranges that will be play an “instrumental” role in the service’s multi-domain operating concept, Secretary of the Army Ryan McCarthy told reporters at the Reagan National Defense Forum in Simi Valley, California.

“What's changed in particular is our long-range precision fires portfolio,” he said.

“There are two systems now that you can implement.” One is an extended-reach Precision Strike Missile, or PrSM, which will replace the Army Tactical Missile System and have twice the range, he said.

“If you were to deploy that along the … second island chains or to countries surrounding the South China Sea, you can alter the anti-access/area denial-type of investments that China has made, for example,” he said. “It would fundamentally change the geometry of the battle space. … You can rapidly deploy and you can put into a position in the very near future to be able to have the range of 550 to 600 kilometers.”

“Initially you will shoot very short distances to test the fundamentals” at ranges of 50 to 100 kilometers, he explained. Those ranges will be extended as the testing regime evolves, and within 18 months or so the weapons will fly farther than the old INF Treaty limits, he said.

PrSM testing is slated for next year. The Army aims to field the systems by late 2022. Anti-ship variants will come later, he noted.

The service is also developing new hypersonic missiles that will be able to travel at speeds of Mach 5 or faster and be highly maneuverable, making it difficult for enemy systems to defeat them. The weapons, with ranges that exceed 1,000 kilometers, could be deployed around the world including in Europe, Asia or the Middle East, he noted.

“It would fundamentally alter the dynamics” in those regions, McCarthy said. “It's a very unique sets of capabilities.”

McCarthy compared the strategic implications of fielding hypersonics to the U.S. deployment of nuclear-armed Pershing II road-mobile missile systems in Europe during the 1980s.

“You saw when those systems were deployed, the types of investments that Russian made to try to counter that,” he said.

The hypersonics program is on track, McCarthy said. Testing is slated for next year and the Army plans to begin fielding the weapons no later than 2023.

“We're going to make a lot of them very quickly” once production is ready to be scaled, he said. “It's going to take time and effort, but we have a very aggressive investment profile for the next five years.”

The fiscal year 2021 defense budget request, which is expected to be released in February, will include a funding boost for the technology, he noted.

McCarthy said he anticipates hypersonic weapons development in the United States will continue regardless of who wins the presidential election next year. “It's going to be a place that will have a tremendous amount attention no matter what administration is here a year from now,” he said. ‘”This is a national-level priority.”

New missiles such as hypersonics and the PrSM will not only bring new capabilities, but could also help reshape the entire Army, McCarthy said. “New materiel that we're bringing into the [acquisition] system is going to make us look at our formations and see if we're right-sized,” he said.

The Army is creating new task forces that will implement the service’s new multi-domain operating concept.

“Once you stand these up and you bring new materiel into the fold, it will make us take a hard look at our brigade combat team structure and say that maybe that's not the right type of formation we need in the future,” he said.

“We're going to change,” he added. “The metaphor I use is like going from a pro-style offense [in football] to the spread — different players, different style. So it's everything from how you train your people, the type of people you recruit, to how they operate the systems and how you employ them. We're fundamentally changing the offense in the U.S. Army.”

Re: JUST IN: New Road-Mobile Missiles ‘Instrumental’ for Army Strategy

Then there's the old adage that "quantity has a quality all its own," irrespective of diameter or WHACK. The swarm principle, attempted but not quite achieved, by Japan, at the last Kamikaze attacks, circa mid-1945, is an example of this marginally unrealized potential.

New innovations are always good, but when you have a tired and true, well tested and proven design already why re-invent the wheel ? The Pershing II was without a doubt the most accurate, most mobile and most deadly missile the Army ever possessed. It was not only "road capable" but also "off-road" capable, air-transportable, easy to set-up and fire quickly. The CEP was within 100 meters from a range of 1,200 miles and the missile was hypersonic at Mach 8. More than 750 missiles were produced and several rounds were fired annually in qualification tests each year for near twenty years. If the Army had billions of dollars left over in their budget with nothing to spend them, okay try and find something better, but the Army doesn't have a lot of "extra" cash just lying around...so why spend money you don't have on something you don't need. Bring back the Pershing II.

Brian Foley at 11:41 AM
Re: JUST IN: New Road-Mobile Missiles ‘Instrumental’ for Army Strategy

To your point Krav, no, these are not MAD weapons, in which case we'd simply put nukes on them. there is no conventional weapon that can take out a city, more like 200 meters. Feel free to add more, but the bombs weighing 30,000 pounds are not going on top of Russky or ChiComm missiles either. But you can put a good sized warhead, say a thousand pounds, and the speed alone would add much more devastation.

Kevthepope at 12:58 PM
Re: JUST IN: New Road-Mobile Missiles ‘Instrumental’ for Army Strategy

The U.S. Army's ability to reach out longer with tactical missiles makes sense with the INF Treaty disbanded, but does that mean that the U.S. Army and USMC can WHACK the enemy harder, or just at longer ranges?
The range issue will be addressed, but the primary launch chassis, the MLRS and HiMARS, still has the same size launch box. So the missile's warhead would technically be of a fixed diameter whereas the Russian and Chinese long-range tactical missiles have one missile per Erector Launcher, meaning their missile's WHACK is bigger than the USA's because their missiles are much longer and larger in diameter. Yes, missile size does matter. Sometimes precision isn't as required as the ability to just devastate an area with a long-range terror missiles. The USA may be thinking of anti-vehicle and material missiles whereas the peer nations think of their missiles as A2AD missiles against cities, land, formations, and transportation nodes.