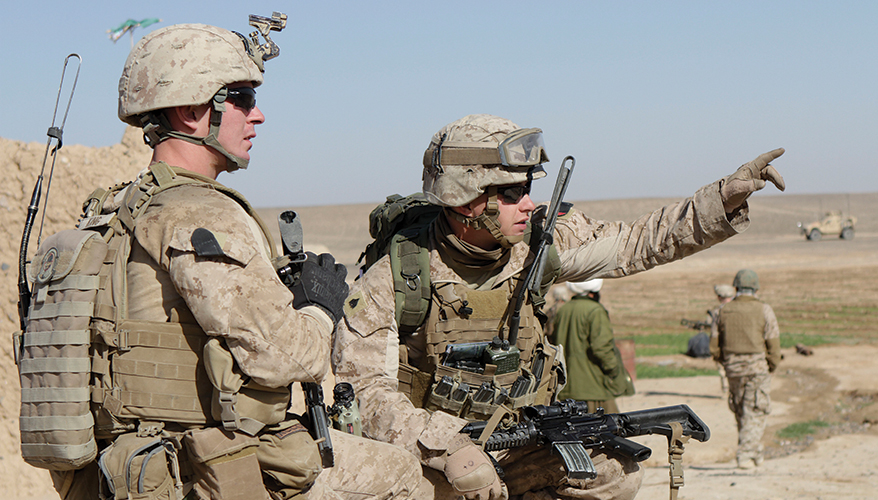 SIMI VALLEY, Calif. — The Marine Corps intends to divest itself of legacy systems as it transforms into a more mobile and expeditionary force, the service’s commandant said Dec. 7.

In recent decades Marines have been busy fighting land wars in Iraq and Afghanistan. But now they must prepare for a potential conflict in a naval environment against advanced adversaries such as China, Gen. David Berger told reporters at the Reagan National Defense Forum in Simi Valley, California.

What types of legacy systems will be on the chopping block?

Mobility will be critical in future fights, he noted. Marines must be able to operate from ships or ashore, and move back and forth between domains.

Other platforms that could see cuts include manned logistics vehicles and aircraft.

“All those things we're going to trim down,” Berger said.

The service is also looking to add new capabilities. The commandant did not identify specific systems that the Marines plan to buy, but he provided a flavor of the types of platforms that will be on the shopping list.

Unmanned logistics vehicles and aircraft are examples of new technologies that the service is interested in.

Human beings will still be on the battlefield, Berger noted. “I just don't need them driving a truck delivering chow” if a self-driving platform could perform the task, he said.

Drones could also deliver supplies. “Amazon does it. Why wouldn't we do it?” he asked.

Unmanned combat aircraft are also on the wish list, he noted.

The Marine Corps has been conducting wargames and simulations to help determine how the force should be redesigned for potential future combat scenarios that might occur 10 years out.

“We’re in the last stages of that,” Berger said. That effort will likely wrap up in late January or early February.

Force composition changes will be made over 10 years, but some will begin next year, he said.

Officials are examining “every part of our air-ground team,” Berger said. A wide range of capabilities are being looked at. “From individual equipment to crew served [weapons] to F-35s and everything in between.”

The analysis will help determine which programs will be killed, trimmed or added, he said.

The service needs new weapon systems that can find and kill enemy ships at range from ship or shore.

“We have to become a naval force that's lethal in terms of putting at risk another naval force,” Berger said.

In the future, large numbers of unmanned air and ground systems could function as motherships that launch other robotic vehicles and drones to conduct missions, he said.

A major funding realignment is planned over the next five years.

More details about programmatic changes will be revealed when the president’s budget request is released in February, he said.

The USMC MEU Ground Force has a problem, and that is the belief that future wars with peer nations will be fought from the 40mm (grenades) down to the 5.56mm M26 IAR and HK416 from Marines and lighter, more mobile vehicles. If the USMC were to divest itself from M1A1 MBTs and other heavy armor and go with unmanned, then the lack of any weapon above the 84mm M4 Carl Gustav would be readily apparent. ATGMs, CAS, naval gunfire support, HiMARS, and artillery (155MM M777s take a long time to set up and then Shoot-and-Scoot) are expected to substitute for the lack of MBTs, IFVs, APCs, and LAVs. That's not going to work in all tactical and strategic situations. UGVs often don't mount weapons larger in caliber than 12.7mm, 40mm MK-19s, or 30mm Bushmaster IIs. The need for large EXPLOSIVE firepower will no longer be there, and thus the threat of "Show of Force" through sheer impressive-sized firepower (like tank rounds) will no longer be available or present = time to call in the U.S. Army Heavy Mechanized.