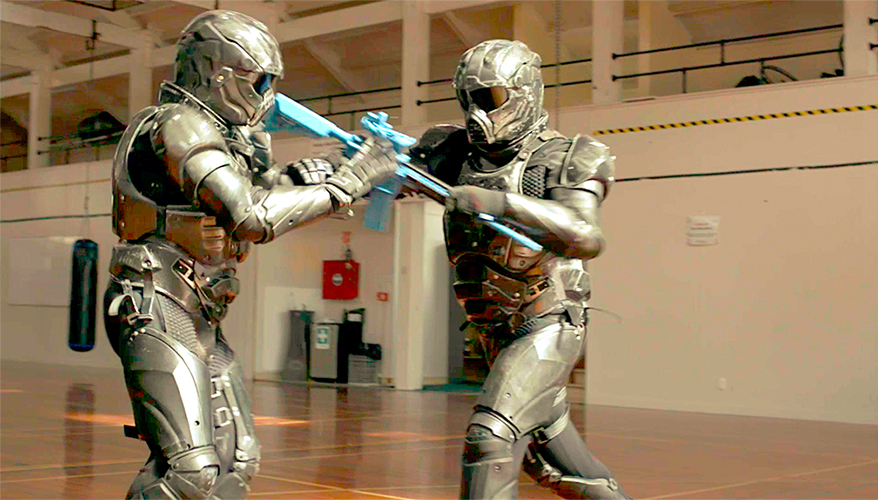 ORLANDO, Fla. — An Australian company introduced high-tech body armor this week that it says can add realism to military and law enforcement training while protecting its users.

The Chiron X-1 is a full-body armored suit that allows students to use realistically high levels of force when training while offering protection from blunt force trauma. The platform is modular, which allows users to choose the level of the protection they need.

The platform is in its pre-production prototype phase and has two variations, David Pysden, co-founder and chairman at Chiron Global, said in an interview during the annual Interservice/Industry Training, Simulation and Education Conference in Orlando, Florida.

The second iteration of the suit — the Chiron X-2— is fitted with sensors to gather data where stabbing, slicing and blunt injuries happen during combat. The system can then analyze the data.

The company brought its suits to the world's largest military training and simulation trade show to seek out potential customers and receive feedback.

“We're here to talk to customers about how they would like to use it, whether there's any customization that they have for their particular application, but really just to demonstrate the potential of the platform,” he said.

The suit has caught the attention of multiple military services, he said. “We have had interest from the Marines, the Army, the Special Forces and they’re our sort of end-users,” he said.

There has also been a substantial amount of interest in an operational version of the suit, he said. “We can make it out of a ballistic outer plate and provide ballistic protection and they can wear that in the field so we can customize it depending on their requirements,” he said.

One of the company's co-founders originally conceived of the suit for practitioners of weapons-based martial arts. But the company’s vision shifted after hearing from the military, Pysden said.

“We put our first video up online and within 24 hours we had [Special Operations Command] contact us and say, ‘you're the only company in the world that we've found that's got a full combat suit of armor with tech in it and we're very interested in what you've done,’” he said.

I can see this being very useful for military and Law Enforcement ATV and motorcycle riders, S.W.A.T., Riot police, jail guards (against shanks), horse riders, or any officer and Operator at risk of a bad fall from up high or something open and fast. The ballistic vest also helps in case of dismounting. Could football players wear this also to prevent injury?

This company should go further and explore the development of this suit for Wildland fires and firefighting (new mask with air) protection, skydiving, and dog walker/K-9 (don't get bit). It could be an anti-shark surfer's suit. It could be an anti-lion suit. It could be used as light or heavy-duty HAZMAT. Heck, it could be used as an all-day raincoat suit if light enough (you definitely will NOT get wet inside!). Civilians could use it as a bicycle, scooter, moped, and motorcycle anti-crash suit. The level of protection and weight could be tweaked to suit all these needs.