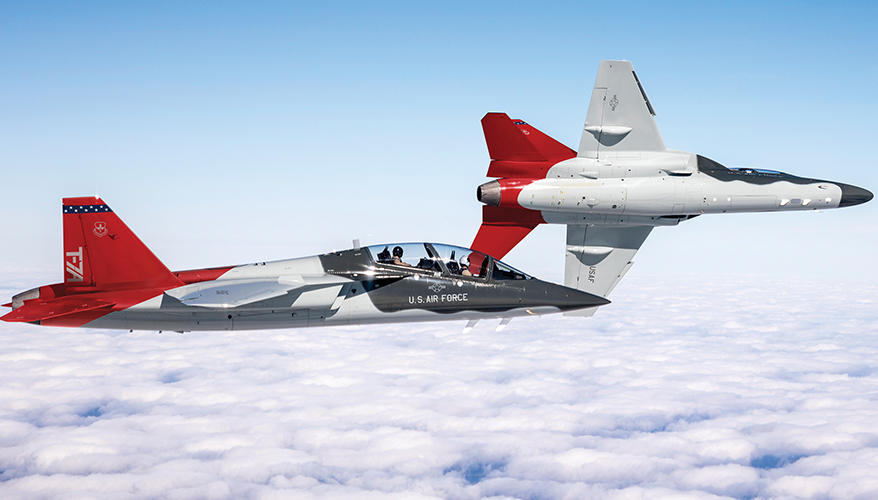 Last year the Air Force announced that it had tapped a Boeing-Saab team to build its next-generation pilot trainer that would prepare its aviators for future fights. A year out, the team is hitting program milestones as it works to deliver the first aircraft in 2023.

The first aircraft and its associated simulators are slated to arrive at Randolph Air Force Base, Texas, in 2023 as a replacement for the T-38C Talon trainer, he added.

Air Force Chief of Staff Gen. David Goldfein said the difference between the T-38 and the service’s fifth-generation platform, the F-35 joint strike fighter, is night and day.

“But with the T-7A the distance is much, much smaller, and that’s important because it means the pilots trained on it will be that much better, that much faster at a time when we must be able to train to the speed of the threat,” he said in a statement.

The Air Force’s indefinite-delivery/indefinite-quantity contract for the T-7A has an estimated ceiling of $9.2 billion for both the aircraft and ground-based training systems. The contract provided for the anticipated delivery of 351 aircraft, 46 associated training devices and other ancillary supplies and services such as initial spares, support equipment, sustainment and training. Additionally, it also includes the initial delivery order for engineering and manufacturing development of the aircraft and ground-based components for $813.39 million.

According to the contract agreement, the maximum number of aircraft and training devices the Air Force can purchase is 475 planes and 120 ground-based training systems. Work is expected to be completed by 2034.

The T-7A will include stadium seating, an advanced cockpit and digital fly-by-wire flight controls, according to Boeing. It employs a General Electric F404 engine and has a wingspan of 30.60 feet, a length of 46.93 feet and a height of 13.55 feet.

Steve “Bull” Schmidt, the company’s chief test pilot for the T-7A, said the aircraft — along with its advanced ground-based simulators — offers a substantial increase in capability over the T-38.

The platform “is very easy to fly and I think with all the modern avionics that we have in it, flying is kind of the easy part,” he said. “Historically, just trying to fly the airplane was enough ... to demonstrate if the student has the capability to fly fast jets. But now I think this aircraft is easy [enough] to fly that we … [can] task them with tactical scenarios.”
The trainer will be compatible with aircraft such as the F-15, F-16, F-35, F-22 and bomber fleets, he said.

The aircraft’s stadium seating — which places the instructor pilot in an elevated position behind and above the student aviator — is particularly beneficial, Schmidt noted.
With the legacy T-38 system, some instructors described the vantage point as similar to being inside a cave due to its limited visibility, he noted. However, with the Red Hawk, the instructor in the back “can actually see forward through the windscreen,” he said. “It’s easier for him to monitor what the student is doing.”

The aircraft also features a glass cockpit which includes a large-area touchscreen display, Schmidt said. Additionally, it has an upfront control system that allows students to enter in radio frequencies, waypoints and navigation information.

The T-7A was also built with safety in mind, he said.

“We knew the airplane had to be robust enough to handle the student’s common mistakes … and still recover from that and let him and the airplane come back safely,” Schmidt said. “We built in a lot of redundancies so if some systems fail it’s still going to be easy to come back and land.”

For example, the aircraft could lose a generator or a hydraulic pump and still land safely, he said.

The company officially began the Air Force’s engineering and manufacturing development phase in June, Schmidt said. Boeing has built two aircraft — known as the T1 and T2 — and is working to demonstrate test requirements needed for the service to accept the planes.

Flight tests are being conducted out of St. Louis. In September, Boeing conducted its 100th flight with the test aircraft, he said. The T1 has flown more than 100 hours, and the T2 has flown around 30 hours.

While the T1 and T2 are identical, they are both equipped with different special test equipment, Schmidt said. During the competition phase of the program, the T1 was used as a “workhorse” to collect flight data, he said.

Boeing is currently staggering the planes’ flights, with one flying after the other. The company has enough personnel that the platform can be flown up to six times a week if needed, he added.

Additionally, depending on weather, there have been occasions where the systems can fly multiple times a day, he said. Flights generally last around an hour and five minutes to an hour and 15 minutes.

So far, the company has pushed the T-7A’s flight speed envelope out to near the supersonic threshold, Schmidt said.

The aircraft — which went from a clean-sheet design to first flight in 36 months — also recently conducted a successful high-speed, low-altitude flight test that was completed at MidAmerica Airport in Mascoutah, Illinois, said Randy Jackson, a Boeing spokesperson.

In about a year, Boeing should receive its first advanced pilot trainer, or APT, aircraft, Schmidt said. APT1 and APT2 will be instrumented test jets, and a third platform will be used for mission system tests, he added.

Boeing will be commencing air-start testing shortly, Schmidt said. That will verify that the engine can start and restart while airborne.

The company has a goal to fly an average of five times a week, he added.

The T-7A package will include not only aircraft but advanced ground-based simulators to train pilots before they ever set foot in a plane, said Steve Dobronski, flight simulation and test engineer for T-7A ground-based training systems at Boeing.

“The weapon system trainer and operational flight trainer devices will have the most advanced out-the-window visual display system fielded in an aircraft flight simulator,” he said in an email. “They will feature the highest fidelity visual displays ever fielded on a production aircraft simulator system.”

Additionally, the aircrew training devices — which include the weapon system trainer, operational flight trainer and unit training device — will be designed and tested to ensure that they replicate the aircraft’s physical characteristics and performance, Dobronski said.

“This level of fidelity will allow the [U.S. Air Force] and other future customers to move many training tasks from the aircraft themselves to the simulators,” he added.

One example includes the addition of a night-vision goggle capability into the training system which will give pilots improved night flight training earlier in the process, he added.

Once delivered, the simulators will give pilots the option to network with other aviators located at different bases, he noted.

Additionally, the live aircraft and the training devices can be networked together to conduct multi-aircraft integrated live, virtual and constructive training events, he said. LVC combines simulation, live training and computer models to create a comprehensive training environment.

Boeing sees a burgeoning market for the trainer abroad and estimates a global market for 2,600 systems, said Thom Breckenridge, the company’s vice president for international sales for strike, surveillance and mobility.

As nations retire aging aircraft, struggle with affordability of existing aircraft, and pursue new fighter jets, “we absolutely are confident in the market assessment,” he said earlier this year during a briefing at the Paris Air Show.

“We are out discussing this brand new capability with customers,” he added. “We’ve got a lot of international interest.”

That interest hasn’t been limited to a single region, Breckenridge said.

The company sees the T-7A “as being the pathway for pilots all over the world for all types of capabilities … both now and in the future,” he said. Different derivatives or variants of the trainer could be created to meet the needs of foreign customers. “This was designed for growth from the very beginning,” he added.

“Given the ramp-up in F-35A purchases, additional KC-46 lots and development of the B-21 bomber, what is the impact of a fourth major defense acquisition program to the [U.S. Air Force] budget?” the report said. “Specific to the T-7A acquisition, Congress may wish to consider the correct number of trainer aircraft and ground-based training systems along with timing of their procurement and fielding.”

Additionally, Congress will need to consider whether the Air Force should accelerate the fielding of the T-7A given the increase in number of fifth-generation aircraft in the service’s inventory, the report said.

I love to read about the U S military. This was a good article.

Vastly superior to T-37 and T-38. This gives pilots a much earlier real world, hands on new technology. We will have better pilots coming out of UPT schools.

The T-38 was the first aircraft I worked on as a crew chief a Williams AFB, AZ. It was a simple aircraft to maintain and was a great trainer. Even though I hate to see it go it is time. It sounds like to new trainer will better support the new training needs for the current jet aircraft needs.