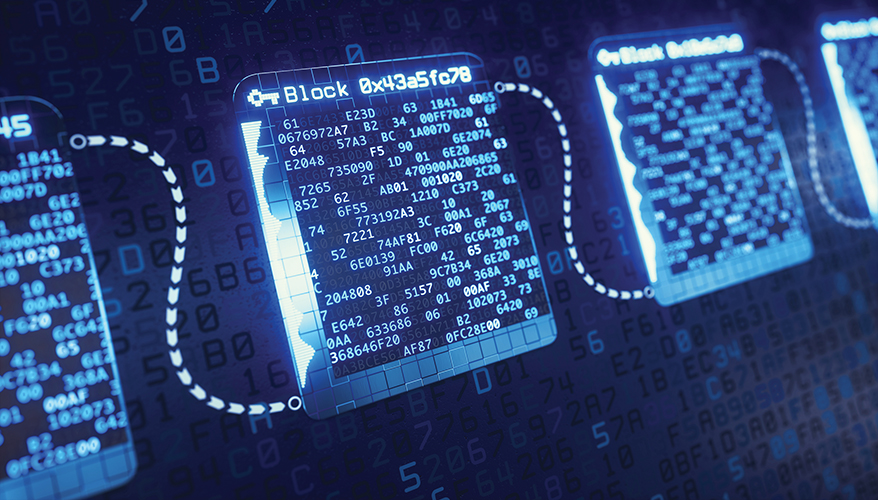 The use of blockchain technology is gaining traction in all industries. The federal government has taken notice and has been exploring ways in which the technology may be used for its benefit.

While widespread use of blockchain in government likely will take time, it may be jumpstarted by the adoption of these capabilities by government contractors. One example of this is in the aerospace and defense arena, where such contractors can effectively utilize the technology to track and trace component parts, mitigate supply chain vulnerabilities, and effectively store and share vast quantities of in-flight data. Use of blockchain in the industry is just a part of the story. As detailed below, it will be used in many ways throughout the government.

Significant and rapid changes in the adoption of blockchain tech warrant the attention of government contractors. Potential blockchain solutions in government have the ability to, among other things, enhance secure data exchange and provide reliable access to information, facilitate device tracking, streamline the procurement process and ensure supply chain security. This can lead to greater efficiency as well as significant cost savings.

Many federal government agencies are experimenting with and embracing the benefits of blockchain technology. This will undoubtedly lead to greater use in the coming years.

According to the General Services Administration, “agencies are eager to better evaluate and adopt distributed ledger technologies (like blockchain) that use encryption and coding to improve transparency, efficiency and trust in information sharing.”

Agencies are exploring the use of blockchain technology that may impact many areas, including: IT asset and supply chain management; patents, trademarks and copyrights; and identity management. The Department of Health and Human Services is leading the pack, with major blockchain projects in production. One of these, HHS Accelerate, aims to save the agency time and money by providing greater access to secure, standardized data and significantly reducing administrative processing time. This efficiency will be applied to acquisition, with HHS using blockchain to combine procurement data sets in a secure cloud to identify cost savings and streamline contract formation.

The Department of Treasury and the Army are pursuing programs for device tracking using blockchain. Treasury is focused on mobile device tracking, which will allow it to better manage its resources and eliminate obsolete or underutilized technology, while the Army is pursuing medical device tracking.

Meanwhile, the Department of Homeland Security has been pursuing blockchain solutions since 2016, including a contract focused on enhancing the security of internet-of-things devices through its project, “Blockchain Software to Prove Integrity of Captured Data from Border Devices.”

In addition, the Defense Department is exploring use of blockchain projects to enhance security and better manage supply chain risk. Specifically, the Pentagon is looking to blockchain to record and authenticate 3D printing activity in the field, which will promote security and allow for faster processing of contractor payments. This solution allows for maximum security where “corrupting both the downloaded 3D print-file and the blockchain channel is nearly impossible.”

Most of these initiatives are in the early stages, but are likely to lead to an explosion of blockchain activity within the federal government as new benefits are realized.

So what is blockchain technology? At its core, a blockchain is a distributed ledger for recording transaction data. A ledger is a recorded list of transactions. Traditional paper-based ledgers include consecutive pages where each line records a transaction and when the page is full, the process repeats on the next page. With many blockchains, each block is like a page. Transactions get verified by a consensus mechanism specified by the blockchain protocol. Validated transaction data is written into a block and time-stamped.

When the block is full a new block is created. Unlike traditional ledgers, when a block is filled, the system creates a hash value, which is just a random number generated by an algorithm based on the contents of the block. This hash value is then written as the first entry in the new block, thereby “chaining” together the blocks, hence the term “blockchain.” If someone ever attempts to change an entry in a prior block, the hash value would no longer match what was written into the subsequent block and that attempt would be deemed invalid. In part, this is how blockchain creates immutable records. Only validated transaction data is recorded and time-stamped, and this data cannot be altered.

Blockchain technology is being used across many industries for many purposes. It is not a solution for every issue, but it does have certain advantages for solving certain problems. According to a recent study of the potential use of blockchain in government solutions, the design of blockchains is especially relevant for certain conditions that affect public data sharing in established business processes, including: establishing trust when individuals or entities may otherwise lack confidence in data accuracy; maintaining quality when threats of tampering or adjustments to information may affect data reliability; and facilitating transparency when individual actors lack trust in a central entity or repository, or when transparency is needed for other accountability purposes.

There are many other advantages. One element of blockchain that enables these advantages is that it’s immutable. Hashing the block contents and “chaining” the blocks by writing the hash to the next block, renders the recorded data immutable.

It can also be distributed. Storing copies of the ledger on multiple nodes, under control of multiple entities, avoids data silos and single points of failure. Being decentralized allows for validating the transactions via a trusted consensus mechanism and avoids the need to rely on and trust any single central authority.

It is also transparent. Subject to privacy controls, the data on a blockchain can be visible to all parties, which for example, can create greater end-to-end transparency in supply chains and other applications.

It can also save money by eliminating unnecessary middlemen who add little, if any, value. Reducing or eliminating manual processes and reducing fraud can all reduce operational costs and further increase efficiency.

As noted above, one of the main advantages of blockchain technology is trust. No one entity validates transactions and controls the data. And the transaction data is transparent among those who have access to the blockchain. Blockchain technology may be used to further establish trust between the government and its contractors where agencies can look to the technology to combat false certification issues as well as foreign threats to the supply chain. Many other uses also are sure to emerge such as supply chain management. The government faces constant challenges associated with the security and trustworthiness of its contractor supply chains. Defense Department regulations include requirements for contractors to monitor sources for electronic parts in order to mitigate against distribution of counterfeit material as well as implement counterfeit parts detection and avoidance systems.

Another application is cybersecurity. Data security is top of mind for contractors, particularly those subject to DFARS 252.204-7012, the Defense Department’s safeguarding rule that requires a written system security plan and extensive security controls to ensure government data is properly protected. While the concept of blockchain as a technology with more actors to verify the authenticity of transactions may not seem to promote greater protection, use of private or consortium blockchains can promote security where the approved members control access to sensitive content and use encrypted keys to verify the authenticity of users. Further, broader use of internet-of-things devices by the government is likely to lead to the pursuit of more blockchain solutions to secure and monitor these devices.

Data management is another possible application. The Federal Data Strategy Action Plan, released in draft form in June, calls on agencies to adopt standards that would make their internal data more readily accessible and usable across government. Open data experts think the White House should consider using the federal data strategy to get more agencies to invest in blockchain technology, at least for a limited set of use cases. Though blockchain “is not a panacea” to the numerous data-related challenges that face government, in some cases it could help encourage agencies to more willingly share information with one another.

These are just a few of the opportunities for blockchain applications in the government sector. As with many new technologies, particularly as applied to regulated industries, new uses as well as new legal issues are sure to arise. Blockchain solutions are gaining momentum every day, including among federal agencies. Government contractors that get involved with blockchain now will have a leg up on those that come late to the party, and may be able to secure unique opportunities that otherwise would not be available. Many companies still are in the exploratory phase of figuring out how they can leverage blockchain and understanding the legal risks.

James Gatto is leader of blockchain technology and digital currency at Sheppard Mullin. Townsend Bourne is a partner in the firm’s government contracts, investigations and international trade practice. They can be reached at jgatto@sheppardmullin.com and tbourne@sheppardmullin.com, respectively.