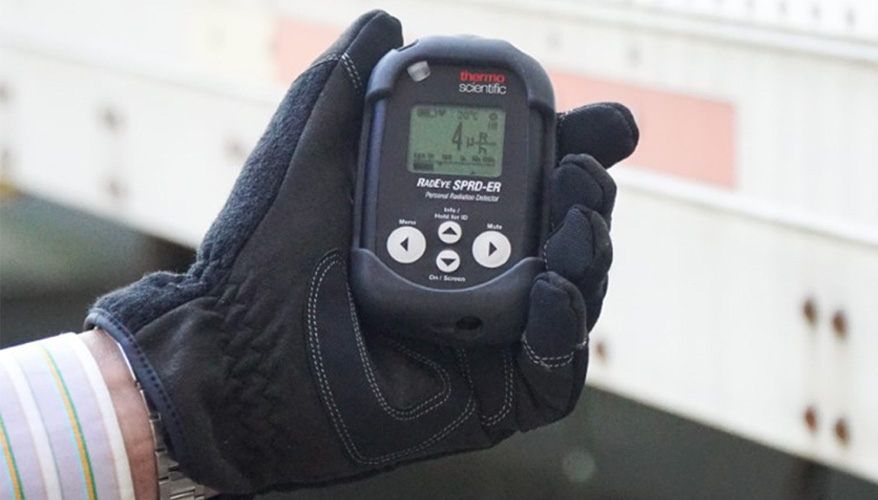 “We decided to incorporate … all of our premium technologies into a single unit,” said Johnny Long, global product manager for radiation detection at the Waltham, Massachusetts-based company.

The Thermo Scientific SPRD-ER is mainly used for search, identification and response missions, according to the company.

The radiation detector, which was launched in August, was designed to withstand extreme temperatures and harsh environments.

“We’re actually already taking orders and it is in manufacturing,” Long said.

The unit has several new updates over the company’s legacy devices, including a new high dose-rate measurement and algorithms for quick radiation detection.

The handheld device offers multiple modes of operation. For instance, it can be used to identify radiation on a 0-9 level gauge, take dose-rate or full spectroscopic readings.

“We actually can now cover a number of field deployments and field missions with the instrument itself,” Long said.

The National Guard currently uses the company’s older technology and the firm hopes it will upgrade its equipment, Long said.

“We have a lot of equipment that goes to the National Guard response teams,” Long said. “In all of these cases, [the product is] designed to protect and monitor personnel from hazards, radiation, either in an occupational work [environment] or in an emergency.”

The active components are currently evaluating a plan to move forward with similar technology, Long said.

“We think we’ve built something that is definitely in line with what they want for their personnel in the field,” he said.

It can be also used by emergency response personnel such as police officers, firefighters and hazmat specialists, he added.

JUST IN: Hyten Concerned With Pace of Hypersonics, Counter-UAS Tech