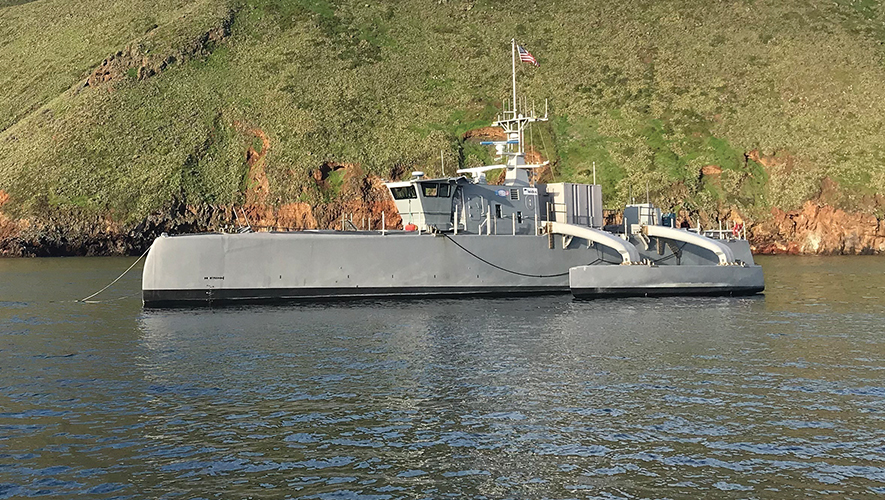 The Navy is looking to bolster its fleet of unmanned surface and subsurface systems with a slew of new platforms and upgrades.

The Navy recently awarded a contract to Boeing for production of five Orca extra-large UUV prototypes, he said during a conference hosted by the Association for Unmanned Vehicle Systems International in Washington, D.C.

The contract, including options, is worth up to $274 million. The service originally awarded a smaller contract for four systems in February, but later increased it by one system.

The Orca XLUUV is an unmanned undersea platform with a core vehicle that provides guidance and control, navigation, situational awareness, energy supply and mission sensors, according to the Navy. The vehicle will have interfaces capable of implementing upgrades in the future to leverage new technologies, the service said in the award announcement.

The system is in production now and is slated for delivery in 2020 through 2022, Small said. “We continue to learn how to deploy and field those systems,” he added.

The service is also continuing to work on a large displacement unmanned underwater vehicle known as the Snakehead. The watercraft is the largest UUV intended for integration with a submarine. Snakehead will be used for intelligence, surveillance and reconnaissance missions.

The Navy plans to release a request for proposals for Snakehead prototypes toward the end of fiscal year 2020, Small said.

The service is looking for “more capable vehicles and vehicles in the production mode ... after our early prototyping with Snakehead,” Small said.

The Navy wants to share more information with industry regarding its prototyping efforts prior to releasing the RFP.

So far, there have been a number of solicitations issued in support of Snakehead’s phase one prototyping efforts, he said. The service plans to build a new prototype and there’s a possibility for some additional efforts associated with Snakehead in the run up to next year’s RFP, Small noted.

The Navy could also release a draft RFP for a medium unmanned underwater vehicle known as the Razorback, during the second quarter of fiscal year 2020, said Michael Alperi, deputy program manager for the expeditionary mission’s program office at Naval Sea Systems Command.

Small noted: “There is a lot of overlap in the mission and the size form factors, so we are looking to collaborate on that.”

The service is also pursuing unmanned surface vehicles. It recently released two request for proposals for the design and production of two single prototype medium boats and a draft RFP for the conceptual design of a large version, Small said.

The “medium USV and a large USV … are two key components of the future surface combatant force architecture,” Small said. There’s a “lot of interest and investment in those two programs.”

For the small surface vehicle, the Navy is working to equip the platform with mine countermeasures, he said.

“We’re working a small USVs program for mine-sweeping, mine-hunting and eventually mine-neutralization,” Small said. The service is also working on an unmanned underwater vehicle program called Knifefish, which will support buried and bottom mine missions.

Knifefish consists of two unmanned underwater vehicles, support systems and equipment. The vessel was approved for low-rate initial production in August. The Navy was expected to award a contract to General Dynamics Mission Systems.

The vehicle is designed to be deployed from littoral combat ships.

Meanwhile, the Office of Naval Research is looking to transition one of its trial unmanned surface vessels to a new squadron. Sea Hunter is an autonomous boat that was christened in 2016 as part of the Defense Advanced Research Projects Agency’s anti-submarine warfare continuous trial unmanned vessel program that was later transitioned to ONR, which is currently working to transition the platform to a surface development squadron, known as SURFDEVRON One, Small said.

Vice Adm. Richard Brown commander of naval surface forces for Pacific Fleet, announced the establishment of the squadron in May.

Sea Hunter will still be a development platform from both a technological and tactical perspective. It is being used by the service as a learning tool, Small said.

“It absolutely did influence the RFP that is on the street now for the medium USV, and we worked very closely with ONR and DARPA and all of the folks who have been operating Sea Hunter and have been involved in the development of that,” he said.

The service is also in search of non-military experts in the unmanned systems industry to collaborate with, Small said.

Meanwhile, battery safety for unmanned systems is a major concern for the service.

It is challenging to find a safe battery option with enough power density that can be used on unmanned underwater vehicles, said John Moses, program manager for the Navy’s battery development safety enterprise at NAVSEA.

“When you put these sorts of devices onto a surface or subsurface vessel or an aircraft ... the effects of these batteries [having] a thermal runaway are much more severe,” Moses said, referring to when an internal temperature change causes a lithium-ion battery to suddenly release stored energy, which can result in a fire. “That’s one of the reasons why the Navy established a battery development and safety enterprise. Its No. 1 priority is to increase the capability of getting the systems out there.”

In his role, Moses is responsible for the development of systems that increase the safe delivery of advanced battery-based devices.

Due to size, weight and power constraints, many of the Navy’s new capabilities require power systems that are smaller but have a higher degree of battery power, which often forces designers to turn to lithium-ion batteries.

“You have these lithium-ion batteries that have some safety concerns associated with thermal runway amongst them, and you’re fielding these additional capabilities on Navy vessels that house sailors,” he said. “You can see that there are some challenges that come from that.

“These safety concerns have limited the ... ability to field some of these systems that we are trying to get out,” he added.

The enterprise was also created to help reduce costs and coordinate the research and development for advanced batteries, Moses said.

Positioning, navigation and timing is a major issue for both manned and unmanned platforms, he said. “In some cases it’s even more challenging for unmanned systems, especially as we’ve tried to push the level of endurance and their operating time.”

Another concern is how to deal with an enemy boarding or tampering with systems.

“That’s going to be a topic of real effort to go figure out what do we need to do to provide anti-tamper and force protection for our larger assets,” he said. “That is a technology area that needs exploration.”

The main challenge associated with protecting platforms is developing software capable of judging the intent of individuals trying to tamper with or board vessels.

“We certainly have nonlethal effects we could take off our shelves from other systems,” he noted.

Next-Gen Mine Warfare to Include Robotic Systems