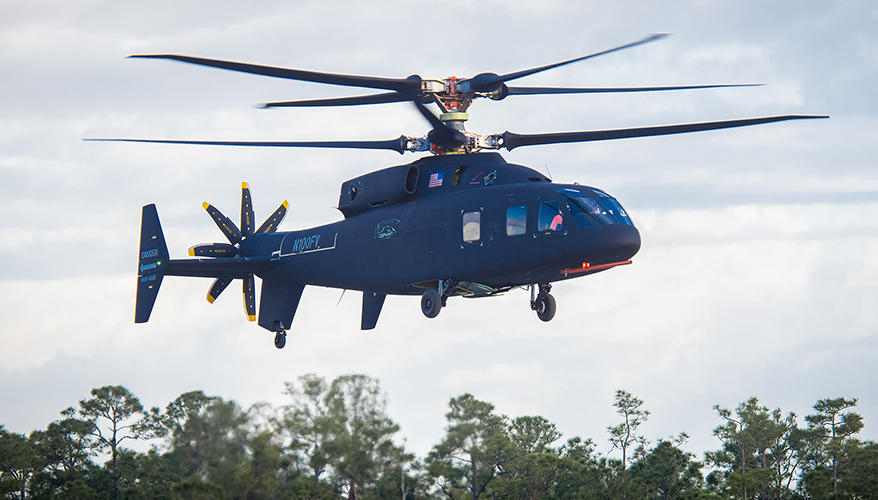 The Defiant — a next-generation helicopter being developed under the Army’s joint multi-role technology demonstrator program — is back in the air after running into technical issues earlier this year, industry officials said Oct. 15.

Sikorsky and Boeing are partners on the Defiant project.

In the spring, the companies discovered a phenomenon known as “bearing creep” in a joint within the gearbox of the power system test bed, or PSTB, said Ken Eland, Boeing’s director and program manager for the future long-range assault aircraft program. The test bed is a near replica of the Defiant that is ground-based and meant to drive technical risk out of the platform.

“It's not related to our technology [and] it's not an unknown phenomenon in the industry — there's other rotorcraft programs that have experienced it as well,” he said during a briefing with reporters at the Association of the United States Army’s annual conference in Washington, D.C. “We were uncomfortable with proceeding for very long with that joint behaving the way that it was inside the transmission, so we made a slight design modification to better control that joint.”

The bearing creep — which causes slippage between fitting services — was discovered after a planned disassembly of the PSTB following three flights in the spring to thoroughly examine its components, he noted.

Randy Rotte, Boeing’s director of global sales and marketing for cargo and future vertical lift, said the company had tough choices to make following the discovery.

“We were faced with: do we do a quick band-aid fix that will get us to the next test point, or do we do a more longer-term adjustment that supports that longer program?” he said. The company chose to make the modifications quickly — which included not only the power system test bed, but also the Defiant and a model used in wind tunnel testing.

Eland noted that by making the fix sooner rather than later, it resulted in a schedule delay of “less than half of what it would have been if we waited to do it later this year."

The Defiant resumed flying on Sept. 24 in West Palm Beach, Florida, he said. The system has now flown for three hours total, with the September flight lasting an hour.

The system flew at speeds of 20 knots in all directions, he said. The Sikorsky-Boeing team plans to push into triple digital speeds this year and hit its top speed requirement of 230 knots in the first quarter of 2020. However, the companies project Defiant will be able to fly up to 250 knots based on testing at the NASA Ames Wind Tunnel that took place in the first half of this year and concluded in June.

“We're the fastest helicopter ever in the NASA Wind Tunnel, up to 250 knots with a powered model,” Eland said. The 1:5 scale model has run at speeds of 200, 235 and 250 knots to glean data and correlate that with the team’s simulations and predictions.

The industry team plans to fly the Defiant again in about two weeks, with a goal to continue to expand its flight envelope, he noted.

As the companies continue to collect data about the aircraft, they aren't targeting a specific number of hours flown but rather focusing on meeting the performance requirements, Eland said.

“It's not really the number of hours, it's the things we can accomplish,” he said. “Sometimes in flight tests, it takes you 10 hours to get to something that you thought would take you one hour. But sometimes you can get there in one hour. So our buildup point is to get up to speed and demonstrate that the technology is integrated together and works.”

The Army’s joint multi-role tech demonstrator is meant as a precursor for its future long-range assault aircraft, or FLRAA, program. That aircraft is the second priority for the service's future vertical lift modernization effort. Bell is also building an aircraft under the technology demonstrator initiative known as the Bell V-280 Valor.