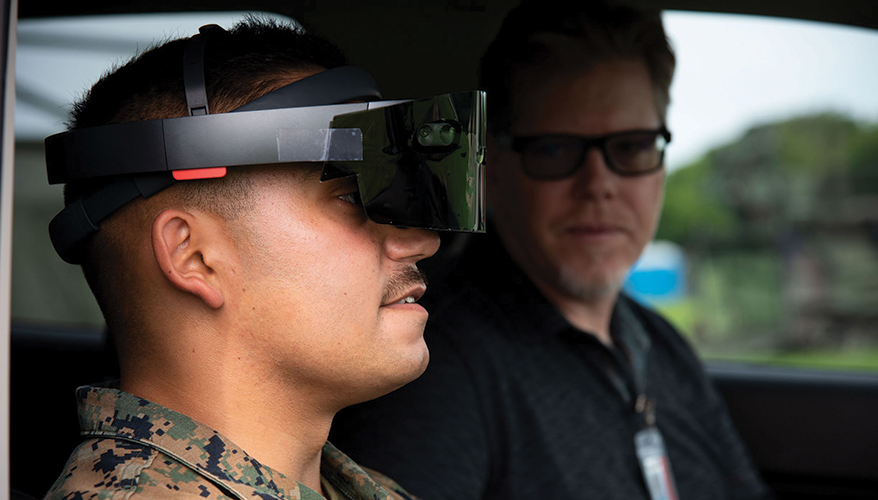 The technology, known as Spectrum Hunter, is a radio frequency emission detection and localization device that uses an AR display, according to the service.

It is a hands-free system which includes a geolocator receiver and a headset inside a helmet that allows warfighters to view RF waves on an augmented reality screen superimposed over heavy sunglasses.

“We received positive feedback from the assessors as well as opportunities for growth,” said Jason Bartlett, a scientist with NIWC Atlantic. “While they were impressed with the software capabilities such as the augmented user interface, adaptability and potential for interoperability with other systems, they also pointed out the desire for increased durability and agility of the prototype.”

The capability is still in its prototype phase, Bartlett noted.

The ANTX East demonstration was the first time the system received limited field evaluation from other Navy laboratories and warfighters, he said.

The office is working on design modifications based on the feedback. It expects improvements to the device’s usability after engineers enable it with new hardware, Bartlett said.

According to the command, warfighters currently use a 10-pound handheld tablet and sensor to detect the source of radio waves they emit. Such emissions can be deadly if they are detected by an adversary, the NIWC Atlantic team said in a press release.

The system could be advantageous for both the Navy and Marine Corps because both services need to track their service members’ radio-wave omissions, Bartlett said.

“Both the Navy and the Marine Corps have an own force monitoring [OFM] need,” Bartlett said. “The system was initially to improve the OFM mission shipboard. One of the intended uses is for signature management to be a key element for survival in an increasingly difficult electromagnetic environment.”