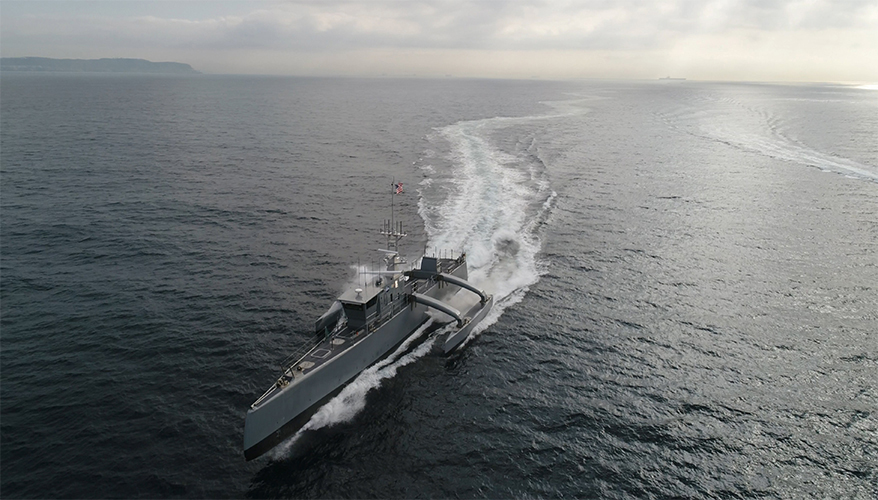 The Sea Hunter, at 132-feet long and 140 tons, is categorized as a “medium displacement unmanned surface vehicle.”

The ship was transitioned from the Defense Advanced Research Projects Agency, better known as DARPA, to the Office of Naval Research in February 2018.

The first prototype of the Sea Hunter was tested outside of Pearl Harbor, Hawaii, in November 2018, according to a Stars and Stripes report.

The demonstrations were intended to test the ship’s endurance, range capabilities and establish “operator trust in safe reliable operations via rigorous at-sea testing, modeling and simulation,” Lt. Cmdr. Tim Gorman, a U.S. Pacific Fleet spokesperson said in a statement, according to the outlet.

Following a recent inquiry from National Defense about the platform, Bob Freeman, an ONR spokesman, said the vessel’s status has now been given a classified designation and declined to comment further.

The Sea Hunter, which was christened in April 2016, in Portland, Oregon, is part of a larger plan from the Navy to develop more unmanned undersea and surface vessels that can operate without putting sailors at risk, and could be more cost effective than manned platforms.

A wide range of unmanned vessels are in the works, littoral combat ship Program Executive Officer Rear Adm. John Neagley said during a presentation at the Association for Unmanned Vehicle Systems International conference in National Harbor, Maryland, in March 2018. His office has since been renamed PEO unmanned and small combatants.

“Those capabilities will be delivered over the next couple years and start to get into our procurements in ‘18 and ‘19 and really start hitting the fleet,” he said.

Re: Navy Lowers Veil of Secrecy over New Unmanned Warship

That makes sense as I see the Sea Hunter aiding the U.S. Navy and Coast Guard for ASW. What’s more, Sea Hunter could be more than ASW (like littoral corvette or gunboat) and carry a variety of guns and missiles that fit her deckspace. If built in quantity, Sea Hunter USVs would be very hard to track.