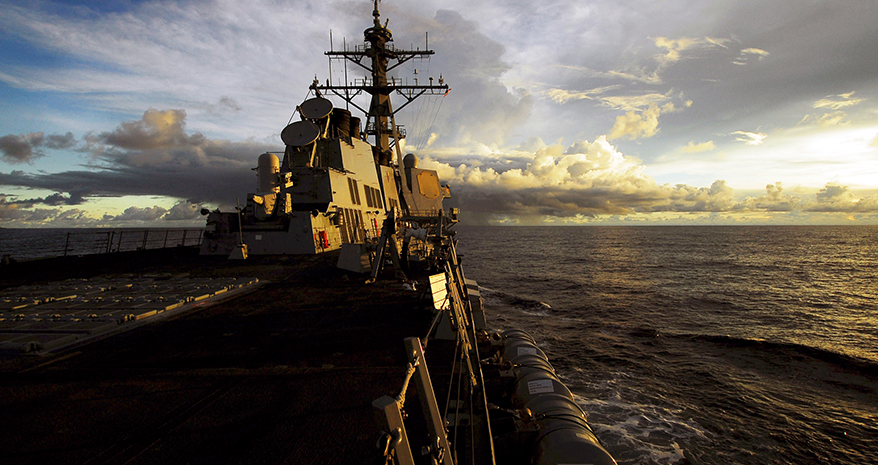 Navy destroyers and other vessels are equipped with advanced capabilities such as Aegis systems to defeat enemy air-and-missile threats. In some cases, they have been tasked to defend sites ashore, which limits the service’s ability to deploy them in other areas. That undermines the Navy’s efforts to boost its global presence and enhance its agility, Chief of Naval Operations Adm. John Richardson noted during remarks at the Brookings Institution in Washington, D.C.

“We've got exquisite capability but we've had ships protecting some pretty static assets on land for a decade,” he said.

“That ship is designed to be a maneuver force,” he said. “If that [static] asset is going to be a long-term protected asset, then let's build something on land and protect that and liberate these ships from this mission … [and] the small boxes where they have to stay for ballistic missile defense.”

While the Navy has top-notch capabilities, a land-based system is better suited to defend sites ashore, he added.

However, Assistant Secretary of Defense for Strategy, Plans and Capabilities James Anderson appeared to throw cold water on the Navy chief's proposal.

"The Navy has periodically expressed on occasion some frustration with ... sailing around in small circles," Anderson said Jan. 29 at a missile defense conference hosted by Brookings. "But the Navy does have this mission of ballistic missile defense. It is one of their core missions and it will remain so."

The service currently has 38 destroyers with Aegis capabilities, but that number could eventually increase to 60 destroyers, he noted. That would give the Navy more flexibility in how it allocates its resources, he added.

Richardson and Anderson’s remarks come in the wake of the Pentagon’s latest missile defense review, which was released earlier this month. The study called for beefing up capabilities across the board, including land-based and sea-based assets. The president’s fiscal year 2020 budget request is expected to call for additional funding to develop and acquire the technology.

Meanwhile, the U.S. military is engaged in great power competition with peer competitors like China and Russia, Richardson noted. While missile defense will continue to be a key area of investment, the Navy is keen on a number of other technologies to help it take on advanced adversaries. One is unmanned systems and autonomy.

“Your head almost explodes in terms of what that will mean from a capabilities standpoint,” he said. “This idea of artificial intelligence, machine learning, how you distribute that across the entire Navy right from sensors to decision centers, if you will, and then back out to payloads is just such a rich area” for technology development.

Directed energy is another area where engineering advancements are yielding fruit, and the Navy plans to field new capabilities on its ships later this year, he noted.

However, the service needs to onboard new technologies faster to stay ahead of advanced adversaries. Slow acquisition processes are a potential Achilles’ Heel for the Pentagon, Richardson said.

Industry input will play a key role in Navy decisions about modernization, he added.

“We will start to go a little bit broader partnering with industry,” Richardson said. “We're doing some great things in terms of bringing industry into our conversations earlier and earlier so that we can understand sort of the technological art of the possible, where the knee of the curve is … in performance versus technology so we can put programs together that are not trying to forecast 30 years into the future.”

The Navy wants to have confidence that a large portion of its development programs can deliver new capabilities in a five-year timeframe, he said.

Updated: This story has been updated to include remarks from Assistant Secretary of Defense for Strategy, Plans and Capabilities James Anderson.