JUST IN: 3D-Printed Suppressors Designed to Work on Machine Guns 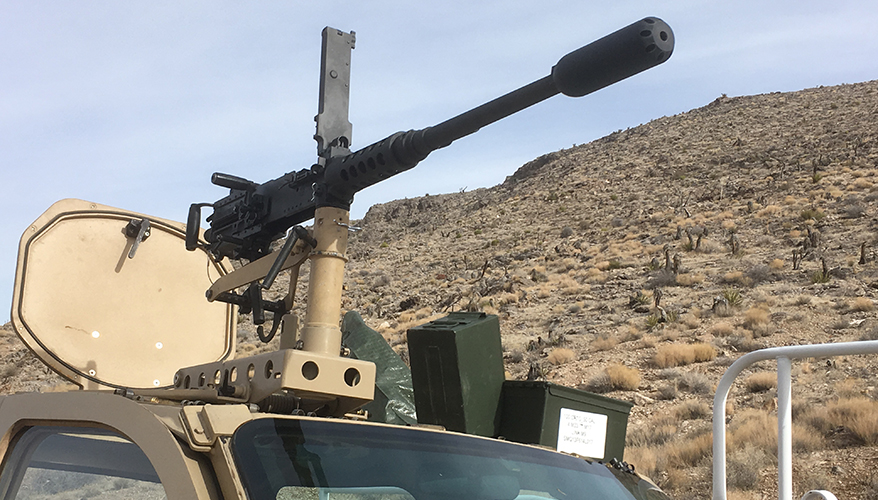 GOODSPRINGS, Nevada — NATO militaries are testing a new line of suppressors using a superalloy and a patented 3D-printed design that works on automatic weapons.

The Waterville, Oregon-based company demonstrated the Brevis III suppressor Jan. 19 for reporters on a M2A1 machine gun at a private range in the Nevada desert prior to the SHOT Show in Las Vegas.

A NATO working group has tested the suppressors and focused on the toxicity of the gas that is a byproduct of shooting rounds. When shooting at a slow pace, there is a burst of gas that comes out of the suppressor without any problems. But when firing rapidly with a normal suppressor, the gas backs up and blows back into the operator’s face, Strong said. It can also speed up the gun’s cyclic rate, he added.

Delta P has several patents that allows the suppressor to quickly process high volumes of gas. The “Quick Drain” technology can only be achieved with 3D printing. It could not be done in a machine shop, he added.

Strong likened it to trying to breathe through a straw. It would be hard using only one, but when eight or 10 are clumped together, it is much easier. “In effect, he has printed multiple suppressors in parallel, only one of which has to pass a bullet. The others just have to pass the gas through and quiet it down at the same time,” Strong said.

The suppressors are made out of an alloy called Inconel, a patented nickel-chromium-based superalloy first developed in the 1940s. “It’s very difficult and expensive to use unless you are printing it,” he said.

It is the same material that makes rocket nozzles that have to go from “white hot to the cold of deep space in a matter of seconds,” Strong said.

The suppressors have been tested with multiple NATO militaries and one U.S. customer he could not disclose. The alliance has a project to redefine the requirements for suppressors, he added.

In one durability test on a .50 caliber machine gun, evaluators shot 996 rounds, which burned out the barrel of the gun. However, the suppressor remained intact. “That is way beyond what anybody can ask of a suppressor, or the gun for that matter. It’s way beyond the firing tables,” he said.

“The goal was durability so no one ever has to think of the suppressor as the limiting factor,” Strong added.

The company has designs for 15 different automatic weapons, but because this is 3D printing, it is not necessary to do a one-size-fits-all approach, Strong said. The design can be tailored to specific machine guns, or different barrel lengths, he said.

“We don’t have a suppressor that we are trying to get people to use on various” guns, he said. “We say, ‘What are your requirements for this platform?’ Do the design with the computer design tools. Push the button. Send it to the printer, out comes your suppressor tailored specifically for that."