Halifax - Where the Spirit of Sen. McCain Lives On 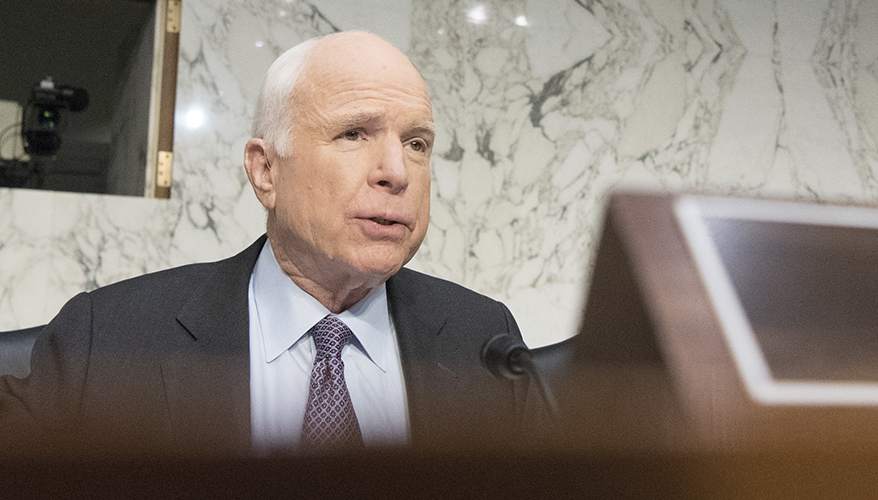 An exclusive group of 300 attendees — diplomats, military leaders, human rights workers, think tank scholars, university professors, journalists and politicians — come from more than 70 nations.
But this was the first meeting after the passing of the gathering’s spiritual leader, the late Sen. John McCain, R-Ariz., who led every U.S. congressional delegation to the conference for its first eight years.

“There are conferences in Europe and in Asia that attract everyone from every country as if democracies and dictatorships were equals,” said the president of the forum, Peter Van Praagh.

“Halifax International Security Forum is not like that. We are certain when we say that democracies and dictatorships are not equal. That is what makes us different. We say clearly here at Halifax: democracies are better.”

In years past, the enemies of democracy and globalism at the conference were obvious: Russia, China, ISIS, and so forth. But new internal ones have emerged: populists and isolationalists.
As far as the conference’s tone, McCain was there in spirit. What would John McCain do? “WWJMD?” was the question — to borrow from the “WWJD?” bumper sticker that was popular about a decade ago. The “J” being Jesus for those who don’t remember.

Van Praagh said: “It is not enough to condemn populists as if they have arisen out of a vacuum. The challenge is to properly identify those issues that allow populists to thrive and for us to address those issues head on. Only this can push the populists back into the shadows where they belong.”

It is not hard to imagine what McCain would have said about Khashoggi’s death. WWJMD?

The flagrant murder of Khashoggi was just one of the many indications that the world is trending away from the ideals of Halifax and McCain. The weekend prior to the forum, President Donald Trump angered allies and potentially comforted foes while in France during ceremonies marking the end of World War I. NATO again seemed to be the target of his ire, and he has stated in the past that the United States may not come to the aid of a NATO member if they were under attack.

A few weeks prior to that, Brazil was the latest domino to fall as the nation elected a far-right populist president Jair Bolsonaro. Hungary, Poland and the Philippines have come under the sway of similarly minded leaders.

Marine Corps Gen. Joseph Dunford, chairman of the Joint Chiefs of Staff, was the highest ranking U.S. official on hand. He told Cindy McCain that her husband was always tough on him and other senior leaders in public and in private, but he knew it was because the senator wanted the best for the rank-and-file warfighters.

“I miss him and I miss his voice,” Dunford said. “And I would just speak for all of us in uniform: he made us better leaders.”

The previous session saw Cindy McCain present the John McCain Award for Leadership in Public Service to the people of Lesbos, Greece, who had welcomed 500,000 refugees to its shores. Dunford was seen applauding the recipients. He was asked how he squared that with the deployment of American troops on the U.S. border with Mexico.

U.S. forces were only doing support jobs, he said. “Our job is not to deny access for migrants in the United States. Our job is to support the Department of Homeland Security in doing their job. I think it’s important you understand that.”

Adm. Philip S. Davidson of Indo-Pacific Command reiterated the globalist sentiment. “The United States is an enduring Pacific power. That will not change and we could not leave the region even if we wanted to. Our historical, structural, and economic and institutional ties are indelible.”

Unlike at some conferences, reporters at Halifax aren’t treated as adversaries or a nuisance. They are a part of the conversation and appreciated for being a vital part of the Western-style democracies the organization extolls. National Defense is honored to be invited every year.

The U.S. congressional delegation met the press and were asked about the disconnect between what was said by U.S. military leaders at the conference and the rhetoric from the White House. Ignore the president’s words and the tweets and look at the actions, lawmakers said.

“It is the president’s statements versus American actions and commitments. That’s where the disconnect is. ... There is a bipartisan commitment in Congress to invest in the world and to continue to be engaged,” said Sen. Jeanne Shaheen, D-N.H.

Sen. Roger Wicker, R-Miss., said: “The president says he’s not a globalist; he’s a nationalist. Yet, he’s sending his secretary of state all over the world trying to solve problems.”

What would McCain have said?