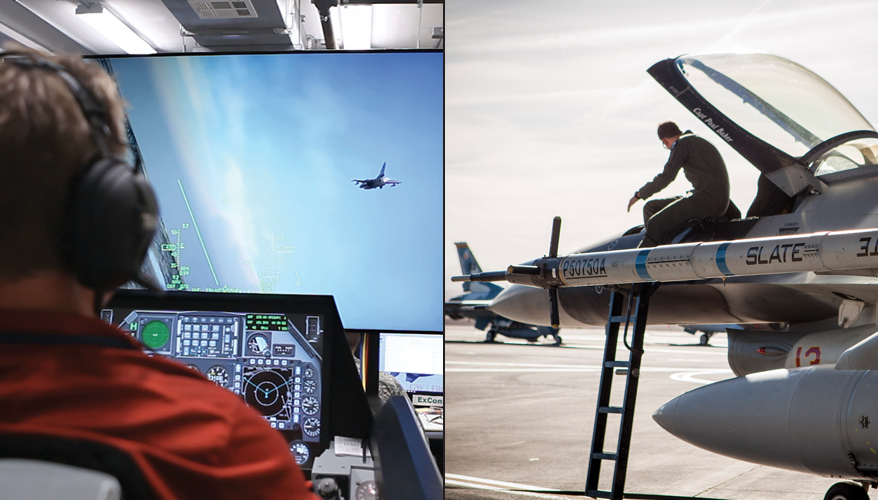 ORLANDO, Fla. — Air Force and Navy officials are declaring success for a joint technology demonstration that tied jet fighters in the air with pilots operating simulators on the ground, who could all fly against computer-generated adversaries.

A final report on the Secure LVC (live-virtual-constructive) Advanced Training Environment (SLATE) demonstration was due at the end of December, but organizers a month earlier said that the exercise went better than expected.

“It was beyond our wildest hopes,” he added.

A team lead by the Air Force’s 711th Human Performance Wing of the Airman Systems Directorate, Warfighter Readiness Research Division took more than four years to set up the exercise. The demonstration then took place over an eight-month period at Nellis Air Force Base, Nevada.

This was created out of “unobtanium.” It had never been done before, said David Noah, AFRL’s program lead for the demonstration.

To make live-virtual-constructive training a reality, the team had to develop several key technologies.

One was the fifth-generation advanced training waveform (5G-ATW) developed by the MIT Lincoln Laboratory to serve as the datalink. In addition to the new waveform, the training system was served by Link-16 and UHF/VHF voice communications.

The second hurdle was ensuring that all three links were cyber secure and encrypted.

The aircraft also carried a SLATE pod that contained the necessary software and allowed for “untethered” operations.

“Tethered” training used the 5G-ATW to connect to a ground station, where pilots could operate simulators and take part in the exercise virtually. That also allowed for more robust scenarios with an almost unlimited number of enemy aircraft or surface-to-air missile sites.

“No kidding, the aircraft was actually seeing the things that we’re putting on the net as legitimate threats, legitimate targets and different things,” said Noah.

Pilots could actually fly to the edge of the training range and “see” computer-generated aircraft far beyond the base’s boundaries, thus expanding the range virtually.

When flying untethered, the pod can generate about eight different scenarios and four to six constructed aircraft. However, since there are no links to the ground station, simulators cannot participate.

“There is an incredible capability that we demonstrated in untethered ops during SLATE,” Noah said. A pilot could start out operating as an F-15 Eagle, then switch over to be part of the red team and fly as a member of an enemy formation: “You can change it literally on the fly: it was gorgeous.”

The exercise used F-15s, F-16s and Navy F/A-18s. Next will be creating links for fifth-generation fighters such as the F-22 and F-35. That will be challenging, but doable, the organizers said.

“That is yet to be solved, and it is a horse of a different color, but we have a plan to go fix that,” Bennett said.

The underlying technology is platform agnostic, Noah said. It could work on other types of aircraft, ships or space systems.