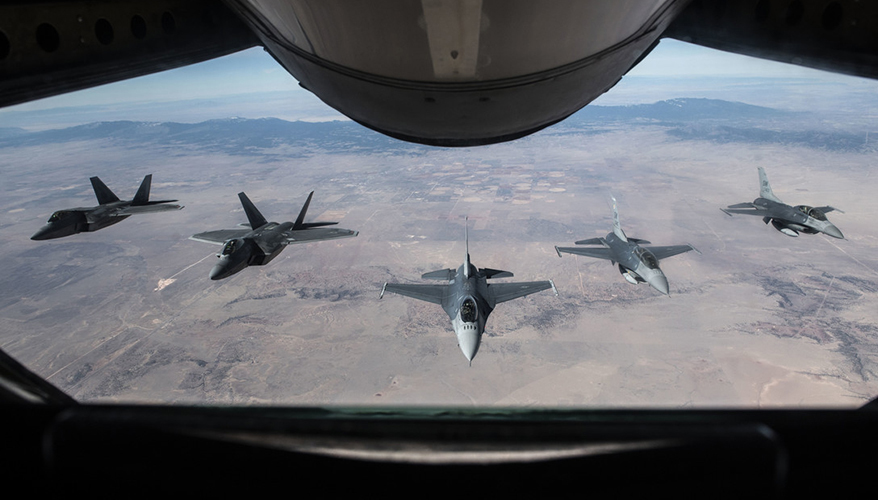 The Air Force and Navy failed to meet their aircraft availability goals over a span of five years, according to a new report by a government watchdog.

The Government Accountability Office released the results of an audit Sept. 10 showing that between fiscal years 2011 and 2016 the services generally came up short, with aircraft availability growing worse over time for nearly half of the assessed models.

“The Air Force and Navy share a variety of sustainment challenges, including the age of their aircraft as well as maintenance and supply support issues,” the report stated. “These challenges have led to half of the aircraft in our review experiencing decreasing availability [between 2011 and 2016] and to the aircraft in general not being able to meet aircraft availability goals.”

The report also detailed a number of issues that were affecting sustainment and aircraft availability, including delays in acquiring replacement aircraft, diminishing manufacturing sources and delays in maintenance.

According to the report, only one of the 12 aircraft types achieved availability goals every year from 2011 to 2016. Five of the aircraft failed to hit their goal in any year, and six aircraft had mixed results.

The Defense Department "spends billions of dollars annually to sustain its weapon systems to support current and future operations,” the GAO said. “The Air Force and Navy are operating many of their fixed-wing aircraft well beyond their original designed service lives and therefore are confronted with sustainment challenges.”

The GAO suggested that the Pentagon update its policy guidance, clarifying whether weapon system sustainment strategy documents should be required to be updated.

“Clarifying the requirements to document sustainment strategies for legacy systems, and documenting those strategies, would add additional visibility over the availability and O&S costs of DoD aircraft and any associated sustainment risks,” the report said.

The Defense Department responded to the GAO report, saying it agreed with the recommendation and will add clarifying language.

“While the department policy specifies that all programs will have Life Cycle Sustainment Plan that is updated every five years following initial operating capability, additional language will be added to DoDI 50000.02 to clarify this applies to all legacy weapon systems," it said.

We have been there, done that and have the tee shirts - post WWI, WWII, V-N, not so much Gulf 1, but big time Gulf 2 (and the reason for the 2011-2016 high Unavailability rates. Also called NMCM or NMCS). It's called the peace dividend. We all wanted it. So Congress enacted it and called it "sequestration". But it went way too far for several reasons:

(1) Gulf 2 became a Forever War meaning constant and unforgiving parts and fuel consumption without replacement of parts, bombs, bullets or sufficient accession of skilled Airmen on our flightlines, ammo dumps (IYAYAS, dudes) and in our shops, supply warehouses and depots.

(2) Promoting Perfumed Princes who were more in tune with the President's social agenda and social calendar than Airmen, aircraft and future mission obligations. And worse we began to believe that we "ain't gonna study war no more" (apologies to PPM among others) so that war will never again darken humanity's doors. Unfortunately, that view was not held by foreign actors nor their militaries. So, not only did we not study war no more, we did not plan for and provide for a future war.

(3) Then, of course, we have the glitches and foibles of our acquisition process that inject a sour taste in the average American's mouth and hence produce Congressional action (or inaction in this case) that arguably are a proximate cause of military equipment and armaments being expensive. But we failed to ask: can we make military stuff less expensive? Yep. Can we make it more lethal and safer for us to use? Yep. Can we do both? Hum. Besides we are using the wrong metrics to inform such questions. We should ask whether it is cheaper to build aircraft (in this case) to fight an air battle over the South China Sea or over Kansas.

Truth in advertising: I am a 30-year career USAF maintainer and logistician. That experience showed me that the crown jewel of America's air combat power are the Airmen (and yes, Sailors) who under-populate the flightlines, decks, ammo dumps, fuel dumps, warehouses and security fighting positions. Yeah, I know that our square-jawed, fearless, steely-eyed young fighter pilot Captains (Lieutenants to you squid types) are much better looking on recruiting posters, and it's their lives on the line - but I would take a Combat Logistician to war anytime, anyplace or anyhow.

Of course they didn't include the hundreds of USAF useless F-35 prototypes.

Come on folks, F-35 prototypes are not useless, they are prototypes, not intended for front line use. Cash is not on A problem, it is THE problem. Do you recall something named Sequestration where DoD bore the major brunt of funding problems. However, what's even worse Congress cannot seem to do their jobs. This year may be the first in many, many years they actually got authorization and appropriation bills done even if they had to use 'Minibuses' to do it. Congress controls the cash. Therefore, CONGRESS is THE problem. If you never been on the front lines and your gear doesn't work because there is no money you only have to look at Congress as both the source and solution to the problem.

According to the chart, the USAF’s F-16 was the aircraft with the fewest sustainability issues. Not covered was the F-15C/D/E, still the real mainstay of America’s air defense network and Combat Air Patrols (CAP). The A-10 was not listed in the report.

For a nation that builds these aircraft, I just find it surprising that both the USAF and USN still holds onto these Legacy aircraft when newer versions of them are available. Sure, money is an issue, but even a fleet of 50 to 100+ newer aircraft can make a difference. The stealthy F-22s and F-35s were grounded due to all sorts of issues from hypoxia to stealth coatings to engine problems. That forces the DoD to fall back on aging Legacy aircraft.

What’s needed is for the USAF and USN to admit to buying Fourth Generation Plus aircraft to “hold the line” for CONUS air defense and low to moderate intensity war and CAPs. F-15X, F-15SE, F-18 Advanced Super Hornets with CFTs, and F-16 Block 70s are needed. The touted “Sixth Generation Fighter” is still over a decade away from service and no one knows how many the USAF and USN can afford. While stealth aircraft are now all the rage, conventional “radar friendly” or semi-stealthy aircraft are still required as “missile and bomb trucks” and to fly cheaply without the finicky stealth coatings and costly flight hours.

The AV-8B, well, sustainability issues are expected as the F-35B was created to replace it.