Clock Ticking for U.S. Military to Defend Against Hypersonics 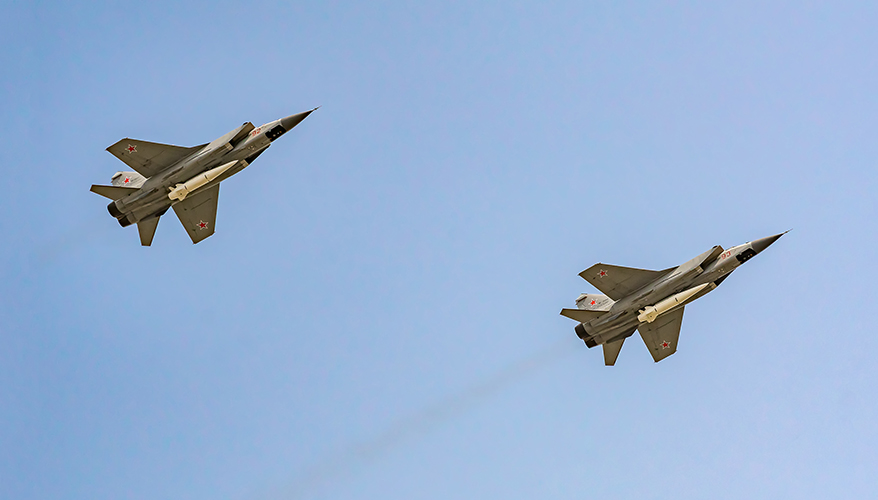 Faced with adversaries developing hypersonic missiles that could potentially overwhelm U.S. defenses, the Pentagon is in a race against time to acquire technologies to counter the emerging threat.

In recent months, Russian President Vladimir Putin has been touting his nation’s hypersonics arsenal, claiming that no foreign power has the means to defeat it. Meanwhile, China has been aggressively testing its own offensive weapons, according to U.S. officials.

Beijing is “close to fielding hypersonic delivery systems for conventional prompt strike that can reach out thousands of kilometers from the Chinese shore and hold our carrier battle groups or our forward-deployed forces on land … at risk,” Undersecretary of Defense for Research and Engineering Michael Griffin told the Senate Armed Services subcommittee on emerging threats and capabilities at a recent hearing.

“We, today, do not … have defenses against those systems,” he noted. “It is among my very highest priorities to erase that disadvantage.”

“Based on what we have seen others demonstrate, there’s no question that it’s only a matter of time before it’s operationalized,” he said during a recent breakfast on Capitol Hill hosted by the Mitchell Institute for Aerospace Studies.

“The question will be what have we done to prepare ourselves to mitigate or eliminate that threat five, six, seven years from now when it shows up?” he added. “We’ve got … to get started now, work with industry and deploy the capability” to counter enemy attacks.

Hypersonic weapons travel at speeds of Mach 5 or higher, but it’s their maneuverability that poses the greatest challenge to defensive systems, noted Tom Karako, director of the missile defense project at the Center for Strategic and International Studies.

“It’s where they travel and how they travel” that makes it difficult to stop them, he said.

Hypersonics may begin their flight on a ballistic trajectory but then change course unexpectedly, he explained.

“Instead of operating by freefall they may do a maneuver and then come back down at a high angle and then … glide” through the atmosphere, he said.

By staying inside the atmosphere rather than going into outer space, the missiles would be flying at a lower altitude than where many U.S. interceptors are designed to shoot them down. Additionally, hypersonics can steer like a cruise missile during flight rather than following a predictable trajectory like typical ballistic missiles, Karako noted. They are also much faster than a standard cruise missile.

“That means that you don’t know … [if the missiles are] coming from this direction or from that direction. And so your defense problem is more complicated,” he said.

U.S. military radars and long-range interceptors are primarily aimed at countering missile threats coming from the north. But a hypersonic weapon could fly across the Pacific, down into the Southern Command area of responsibility, and then change direction again and attack the United States from the south, he noted.

To deal with this threat, defensive systems will need to be deployed on a more distributed basis, Karako said. The Pentagon also needs a more sophisticated space-based sensor layer to persistently track enemy warheads.

“Those sectored ground-based radars can’t be everywhere, and you can go around them and their reach is limited fundamentally by the curvature of the Earth,” he said.

The existing sensor architecture could leave large gaps in coverage that would make it difficult to track hypersonic weapons, he added.

“If you’re relying upon ground-based radars you’re cooked,” he said. “You pick it up and then somewhere after you lose it, it’s maneuvering and you don’t know where it is now. And so the only way to kind of get at this is from overhead space-based sensors.”

Greaves said the Missile Defense Agency needs to have a “birth-to-death” tracking capability to defeat hypersonics.

“Unlike the ballistic threat … we can’t accept gaps, and space offers a vantage point to maintain that custody from birth to intercept,” he said. “That’s going to be absolutely essential.”

“It all begins with the Air Force space-based infrared system … providing the bell ringer that something is happening, there is a heat signature of a threat that’s coming our way,” he said. “Then depending on what type of threat it is, the first system we’re looking at is some sort of a missile defense tracking system looking down at the Earth, the warm features of the Earth to essentially do that birth-to-death tracking … [and flightpath] prediction for things like the hypersonic threat or maneuvering threat.”

Satellites would pass that sensor information to a command-and-control battle management system, which would cue interceptors to go after the target, he explained.

The Pentagon is working with industry through the Space Enterprise Consortium on concepts for a new sensor architecture. “We’ve got white papers out to nine or 10 entities who are interested in pursuing that,” Greaves said.

The Missile Defense Agency is also keeping an eye on the Defense Advanced Research Projects Agency’s Blackjack program, which is looking at how the U.S. military could leverage commercial satellites in low-Earth orbit.

Concepts that have been floated by industry include deploying sensors in geosynchronous orbit, mid-orbit, or low-Earth orbit, Greaves said.

The Defense Department plans to make a decision later this year on what the new architecture should look like, he said. “We’re in the process of picking the best design, working with Dr. Griffin and his office on which is the best approach.”

The plan is to “neck down to a competition of some sort, make the decision and then move out on the demonstration mission,” he added.

The technology must be demonstrated to be effective before the Defense Department launches a major program, Greaves said, citing past space projects that experienced difficulties.

“We all know what happened when we overpromised and we underdelivered,” he said.

The Missile Defense Agency hopes to have the new sensor layer in place by 2025 or sooner.

“Some may say, ‘Why don’t you go faster?’ It’s because … to go fast sometimes you need to go slow early on,” Greaves said.

The sensing technologies would have to be tied into a robust command-and-control battle management system. Faster interceptors will also likely be needed to deal with the hypersonic threat, he said.

Karako said a more advanced interceptor capability might not have to be designed from scratch.

“It may be that there is some incremental or block modifications to our current several families of interceptors that can more effectively get after this,” he said. “In other words, it doesn’t necessarily involve a brand new thing, but it may require some modifications to what we’ve got out there” now.

New variants of systems such as the terminal high altitude area defense, Patriot advanced capability-3, or standard missile-6 could theoretically be used to shoot down enemy hypersonics, he noted.

The 2018 national defense strategy emphasized that the U.S. military has entered a new era of great power competition. Much of the Pentagon’s acquisition enterprise is now focused on technologies that are applicable to potential high-end fights against China and Russia.

“Everybody knows that this demand signal is out there,” Karako said. “Everybody who has got a widget that has potential applicability to the hypersonic defense mission is probably thinking through how to use that widget in the most effective way possible.”

Much attention has been paid to the Pentagon’s push to develop its own offensive hypersonic weapons, she noted recently at the Bernstein annual strategic decisions conference in New York.

“There also is an important element of being able to defend against hypersonic weapons … and that’s an area where the Northrop Grumman portfolio is particularly strong in being able to detect those threats, much the way we have played in the missile defense business for decades,” she said.

“This is a new type of threat that needs to have good detection and response capabilities, and so this is an area of importance to us but just doesn’t quite get talked about as much as the weapons themselves,” she added.

Lockheed Martin and Raytheon, two of the biggest industry players in the missile defense marketplace, declined to comment for this story.

Greaves noted that the development and deployment timeline for new capabilities will depend on funding.

In authorization and appropriations bills for fiscal year 2019, lawmakers have been boosting spending levels for the Pentagon’s counter-hypersonics projects. However, Rep. Mike Rogers, R-Ala., chairman of the House Armed Services strategic forces subcommittee, said he’s not confident that steady investment will continue in the coming years.

“The majority clearly feels like the threat is significant … [but] we still have sequestration” slated to go back into effect in fiscal year 2020, he said during another meeting on Capitol Hill hosted by the Mitchell Institute. “We have got to wrestle that gorilla again … and it’s going to be tough.”