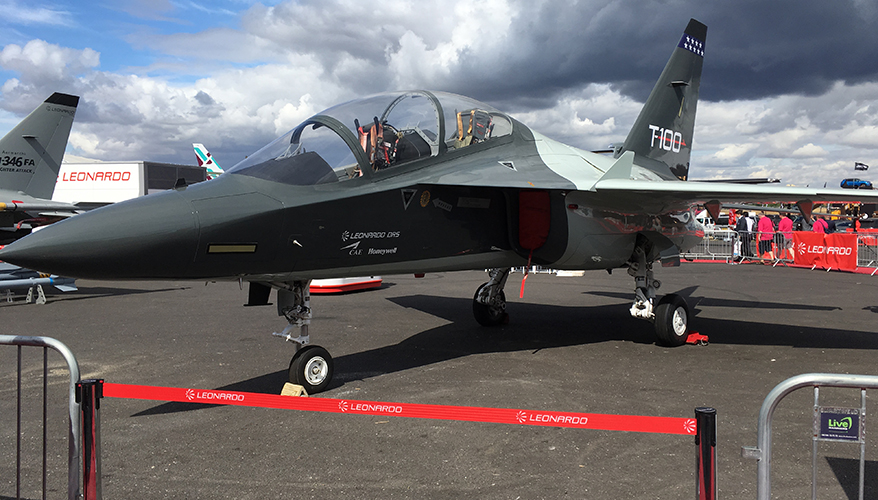 FARNBOROUGH, United Kingdom — Leonardo DRS is hoping its parent organization’s track record will give it a leg up in the competition for the Air Force’s new T-X jet trainer, the head of the company told National Defense in a wide ranging interview.

The T-X program could be worth up to $16 billion, as the Air Force seeks to replace its aging T-38s with up to 350 new systems. The industry teams competing are Leonardo DRS (a U.S.-based subsidiary of the Italian firm Leonardo S.p.A.), Lockheed Martin and Boeing.

“It’s a big program. It would be an important win for us,” CEO Bill Lynn said at the Farnborough International Airshow, which kicked off July 16 and runs through July 22. “This would be a substantial increase in our Air Force business.”

Leonardo’s T-100 airframe was on prominent display at the airshow near the company’s chalet. Lynn noted that the system would be more than just the aircraft.

“What the Air Force wants in the T-X is … a training system,” he said. “A pilot in the simulator can fly a mission with the pilot in the aircraft and you can simulate a threat. You can do all the live-virtual-constructive interactions with this” T-100.

Leonardo is offering a low-risk product, he said. Sixty M-346 advanced jet trainers are already operating in several countries around the world including Italy, Poland, Israel and Singapore. The T-100 would be based on Leonardo’s S.p.A.’s M-346 with upgrades tailored to U.S. Air Force requirements, he noted.

“We’ve got 20,000 hours on this [M-346] plane,” he said. “Already having the aircraft flying … [and] integrated with the training system is a key benefit of our offering.

“You want at a trainer that’s going to come in on cost and on schedule … and we think that’s what we have,” he added.

Will Roper, assistant secretary of the Air Force for acquisition, technology and logistics, told reporters at Farnborough that the service expects to award the T-X contract by the end of the summer.

Meanwhile, some observers are concerned about a possible trade war between the United States and countries in Europe and elsewhere. Nations have been imposing new tariffs on international trade in recent months, and the trend was a hot topic of conversation at the airshow.

“We watch it but the impacts for us have been very modest at this point,” Lynn said. “I don’t know which direction these things are going but right now we’re not finding big issues.”

President Donald Trump and other officials in his administration have been promoting a Buy American, Hire American agenda intended to boost U.S. industry. Lynn said DRS has an advantage of being a U.S.-based firm with a high-tech European parent company.

“It’s the right model” in the current environment, he said. “We are an American company, we do all the classified work. But we also have access to the Leonardo technology,” he added.

If Leonardo DRS wins the T-X competition it will build a plant in Alabama to manufacture the system. Other partners in the project would include CAE in Florida and Honeywell in Arizona, as well as a broader national supply base, he noted. The initiative would create thousands of jobs for the U.S. economy, Lynn said.

Leonardo DRS is moving forward with a number of other projects. The company is providing sensors for the Army’s joint effects targeting system, he noted.

Defensive systems are another significant growth area, he said. The company won contracts to supply the Trophy active protection system for U.S. Army Abrams tanks and a short-range air defense system to defend against drones, he noted.

It also recently won an award for the Army’s next-generation mobile family of computer systems, or MFOCS, Lynn said.

“This is … going to be critical to the Army as they go to the next level,” he said. “They’re going to want to fuse all the data from the sensors systems that come into the vehicle, and this MFOCS has the capability to fuse that data in the way that basically an iPhone does. That’s the next step in terms of improving the capabilities of our Army vehicles.”

Budget uncertainty is always a concern for contractors. Congress agreed to lift the Budget Control Act caps on defense spending in fiscal years 2018 and 2019, and boost spending levels to about $700 billion and $716 billion, respectively. But the caps are slated to go back into effect in 2020 unless lawmakers reach another agreement to undo them.

Lynn, who previously served as deputy secretary of defense during the Obama administration, is optimistic that the BCA won’t be triggered again. There is bipartisan support for robustly funding the military, he said.

“The track record has been that Congress has come together to find an agreement that would protect defense spending,” he said. “I think that will be the path we follow in the future. … I doubt we’re going to see a return to sequester.”

Lynn said he doesn’t anticipate major bumps in Pentagon funding after 2019, but there will likely be steady growth that keeps up with inflation.

“That’s the planning assumption we’re using” as the company makes decisions about investments, he added.

Acquisition reform has been a major trend in recent years. Congress has passed legislation that included a major reorganization of the Pentagon bureaucracy, and efforts to reduce bureaucratic red tape and speed up technology development and procurement.

Additional reforms could be on the horizon as lawmakers await the final report of the Section 809 Panel, an influential advisory group that has recommended sweeping changes to the way that the Pentagon does business. But Lynn said a rush to create new initiatives might not be the best way forward.

“You want to take some time to implement the reforms you’ve already embarked on rather than necessarily another wave of reforms,” he said. “Stability in the process is important here, so … the focus ought to go from developing reforms now to implementing them.”