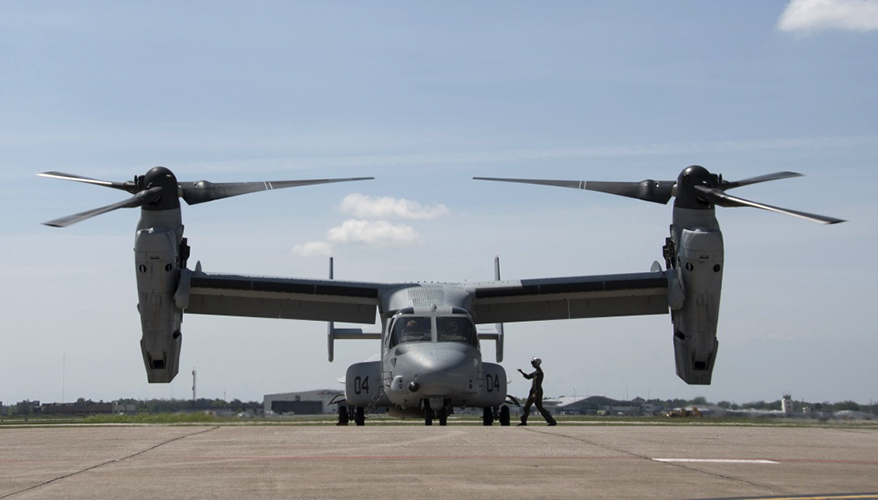 FARNBOROUGH, UNITED KINGDOM — The recent award of a multiyear production contract for the V-22 Osprey tiltrotor aircraft could open the door for additional international customers to purchase the platform, a top program official said July 17.

In June the Defense Department awarded manufacturer Bell-Boeing a $4.2 billion fixed-price multiyear contract modification for the production and delivery of 58 Ospreys, including four for the government of Japan.

Japan is currently the only foreign military sales customer for the aircraft, but the head of the V-22 joint program office hopes that more will be signing up soon.

“The beauty here is now … we’ve got the advantage of being able to offer that multiyear pricing, we built into that contract flexible quantities in every year,” Marine Col. Matthew Kelly said during a briefing at the Farnborough International Airshow.

“If there’s any year in that multiyear … an FMS partner wants to buy more aircraft we can go do that,” he added. “It just makes it very attractive we think for foreign military sales to get in while this multiyear is in effect.”

The contract covers fiscal years 2018 through 2022. A letter of acquisition would need to be signed by the end of fiscal year 2020 for a foreign partner to be able to take advantage of the benefits of the multiyear deal, Kelly said.

The Osprey is unique in that it can take off and land vertically like a helicopter but its range, speed and cargo carrying capacity is more on par with a fixed-wing aircraft. It can be used for multiple types of missions including combat assault and amphibious assault, supply, humanitarian assistance and disaster relief, he noted.

“In the Marine Corps we think of it really [as] less of a helicopter and more like a small C-130,” he said.

“We think [the multiyear contract situation is] a great opportunity for folks around the world to really take a look at V-22 and what it can provide,” Kelly said. “We know there are in fact a number of countries that are looking at V-22 right now to fulfill some of their needs.”

Kelly declined to name all of the nations that are considering purchasing the aircraft, but noted that Israel was close to buying the platform a few years ago before it decided not to pull the trigger. “We’re hopeful that they will continue to show that interest and that we may be able to work something out here within the multiyear,” he said.

The United States has been in close communication with the United Kingdom about potentially acquiring the Osprey, he said. The U.K. is already buying the F-35 joint strike fighter, and the V-22 is the only platform that can fly the fighter’s F-135 engine out to a ship, Kelly noted.

“That logistics support is critical,” he added. “We think that other countries … would be very interested in an aircraft that could fly over 1,000 nautical miles and deliver cargo, troops, support to that ship — whether that’s smaller deck ship or a larger deck ship.”

The Royal Navy will be conducting F-35 trials with the HMS Queen Elizabeth aircraft carrier off the coast of the United States later this fall, and the V-22 will support that effort, Kelly said.

“We believe, frankly, the U.K. has a need for this [Osprey] aircraft,” he said. “We know that that’s up to them but … no other aircraft can provide that speed, versatility and cargo capabilities to support those operations.”

Kelly raised the possibility of a regional logistics support system that could boost local industry in countries that buy the Osprey.

“With Japan we’ve certainly gotten their industry involved in repair and overhaul of the V-22,” he said. “The same kind of setup could work in Europe similar to what’s going on with F-35 right now to involve local industry in that support role for the aircraft, whether that be training, overhaul engine work, those types of things.”