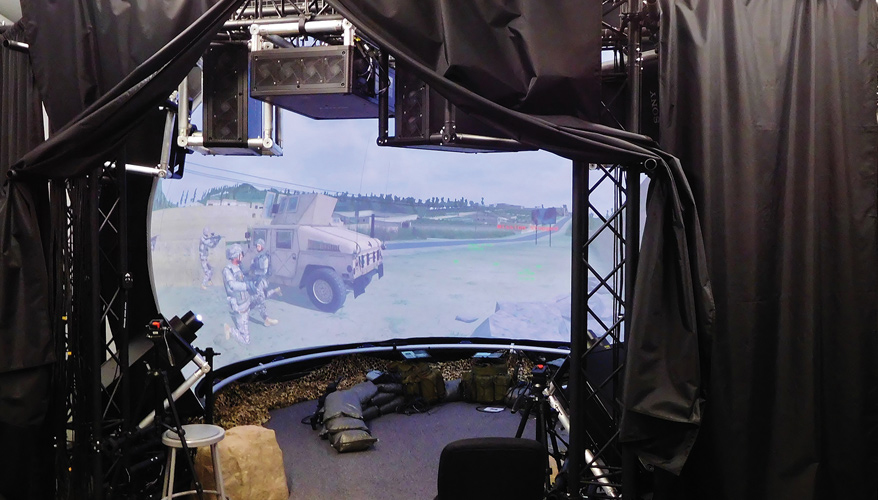 Northrop Grumman recently provided simulated training to Army Rangers from the 2nd Ranger Battalion over a period of three days at the Combat Air Force Distributed Training Center at Langley Air Force Base, Virginia. It was one of the first major joint exercises conducted through the center, said Phil Guy, live-virtual-constructive business development manager for the company.

“As our nation trains its warfighters to fight in very realistic scenarios, you need to have these types of joint activities,” Guy said.

The virtual training was given to Rangers with joint terminal air controller — or JTAC — certification, and simulated actual battle scenarios, according to the company. For this event, the company worked with Joint Base Lewis McCord’s 5th Air Support Operations Squadron to create specific scenarios requested by Army Rangers, said Kevin Brown, project manager and live-virtual-constructive mission director at Northrop Grumman.

Through the distributed training center, the company arranged for an array of fighter and bomber units from other bases to check into the virtual training network via simulators and take over the airspace “just as they would in the live fight,” he added.

“An F-15E [fighter] unit from Seymour Johnson Air Force Base in North Carolina might be on station for one or two hours … but at some point, in the real world, they would run out of gas or have to go to a different mission,” he said. Another unit, such as a B-1 bomber squadron from Ellsworth Air Force Base in South Dakota, could then check in and take over the air support role in the JTAC training, he added.

The process from request for the exercise to training took about two weeks, Guy said.

“For JTAC training, if we really want to train with the fighters or the bombers or the [intelligence, surveillance and reconnaissance] aircraft, the primary location is becoming the simulator,” he said.