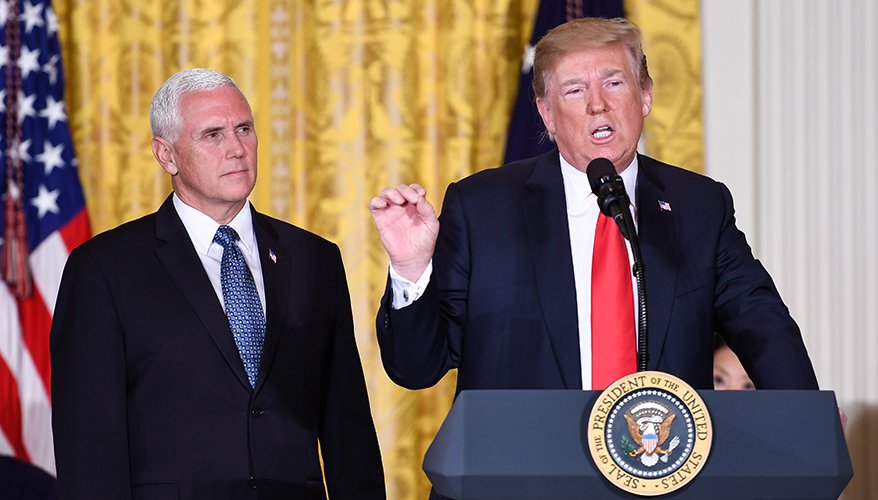 President Donald Trump pulled the trigger on the creation of a new military branch June 18 when he ordered the formation of a space force.

“When it comes to defending America, it is not enough to merely have an American presence in space, we must have American dominance in space,” Trump said before a meeting of the National Space Council.

Trump called on Chairman of Joint Chiefs of Staff Marine Corps Gen. Joseph Dunford, who was on hand for the announcement, to get started on the process.

"I am hereby directing the Department of Defense and Pentagon to immediately begin the process necessary to establish a space force as the sixth branch of the armed forces," Trump said with Vice President Mike Pence, chair of the National Space Council standing behind him.

“That’s a big statement,” Trump said. “We are going to have the Air Force and the Space Force. Separate but equal."

In a statement provided on condition of anonymity, a defense official told National Defense: "Space is a warfighting domain, so it is vital that our military maintains its dominance and competitive advantage in that domain. The Joint Staff will work closely with the office of the secretary of defense, other DoD stakeholders and the Congress to implement the president's guidance."

One prominent space policy expert questioned whether the president could unilaterally create a new military branch without authorization from Congress.

“The president can’t create a new military service on his own,” said Todd Harrison, director of the Aerospace Security Project at the Center for Strategic and International Studies. “There’s going to have to be legislation that creates this because there’s all sorts of new positions that need to be created if you’re going to do that that don’t exist now, and all sorts of new authorities that have to be reassigned from the Air Force to this new service."

“That’s not clear yet. You would probably need to pass that through Congress. There does seem to be at least some support for doing something about space in Congress. So he should be able to get something passed through there. I think the bureaucracy is probably going to be a bigger hurdle than Congress,” he said.

Rep. Doug Lamborn, R-Colo., a member of the House Armed Services Committee, in a tweet said: “Space defense is a serious issue the U.S. needs to improve – it requires just as much attention as air, land and sea defense. I look forward to working with @POTUS Trump to make sure this is done right.”

Trump had floated the idea of taking away the responsibility space from the Air Force in the past, but used the meeting of the National Space Council to make the announcement.

An Air Force spokesperson said the service did not at present have a statement to make.

“The Pentagon is complicated enough,” Air Force Secretary Heather Wilson told reporters after a June 2017 congressional hearing. “This will make it more complex, add more boxes to the organization chart and cost more money. If I had more money, I would put it into lethality, not bureaucracy,” she added, according to Roll Call.

“If you’re saying the words ‘separate’ and ‘space’ in the same sentence, I would offer, you’re moving in the wrong direction,” Chief of Staff of the Air Force Gen. David Goldfein testified. “That’s why the secretary and I are focused on how we integrate space. ... Every mission that we perform in the U.S .military is dependent on space. Now is not the time to build seams and segregate and separate — now’s the time to further integrate,” he said according to Roll Call.

Ostrove said: “It could be very messy,” with Harrison noting that a big unknown is how the National Reconnaissance Office and the space components of the Army and Navy will fit into this new organization.

“I think the significance of what the president said today is he’s directing the military to not resist this, that this is what he wants to do,” said Harrison. The latest National Defense Authorization Act required that the Pentagon complete a study due by December on creating a space force and to establish a roadmap for its construction, he noted.

Trump’s “statements are not going to create a space force,” Harrison said. “And in terms of coming up with a plan they were already required to do I think the biggest significance is that the Air Force and DoD are not going to be able to resist it as much.”

“My guess would be that at the end of the day since he is the commander in chief they will go along with it,” he added.

Wilson in April announced a restructuring of Space and Missile Systems Center, which she called SMC 2.0, to make acquisition of spacecraft and other space related technologies more nimble and quicker. The Air Force also stripped Space Command of the service’s cyber operations June 8 and transferred them to Air Combat Command.

“So I don’t think will change too much in the near term, it could change more longer term though,” he added.

Harrison said: “This isn’t going to happen quickly. … I don’t see this getting into the NDAA until next year at the earliest and then several years before it’s fully implemented.”

"We understand the president's guidance," she said. "Our Policy Board will begin working on this issue, which has implications for intelligence operations for the Air Force, Army, Marines and Navy. Working with Congress, this will be a deliberate process with a great deal of input from multiple stakeholders."

Update: This story has been updated to include new comments from defense officials.