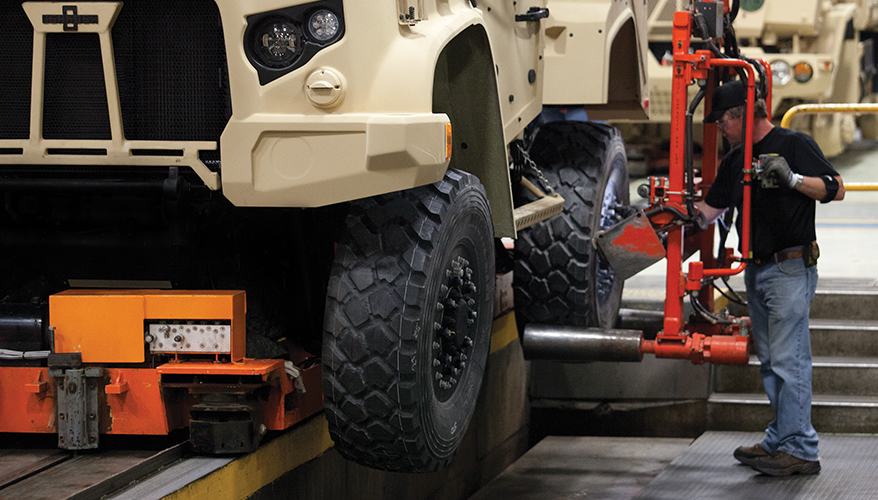 The Army and Oshkosh Defense plan to demonstrate new technologies on the joint light tactical vehicle that could expand the system’s capabilities, according to an industry official.

“We are working hand-in-hand with the Army to develop those kits so that this vehicle will become scalable from anywhere from a very lightweight vehicle all the way to [a more heavily armored] vehicle,” he noted. “We do have some things in the works to scale this vehicle that could be an option for replacing more Humvees in the future.”

The JLTV, which is currently in low-rate initial production, is expected to replace some of the service’s up-armored Humvees. A full-rate production decision is slated for December and fielding is scheduled for January 2019, he said. Oshkosh is producing the JLTV at a rate of seven to eight trucks a day, he added, and has the capacity to almost triple the rate should the Army decide to increase its demand. The service procurement objective is 49,099 trucks, according to budget justification documents.

The vehicle kits may be ready this summer, Mansfield noted. The platforms will be demonstrated at different Army bases as well as Marine Corps Base Quantico.

One of the kits, which was developed by Oshkosh, provides the vehicle with additional underbody protection, he said. The Army is developing the other three kits, he noted, declining to provide further details.

At the same time, the company is investing its own research-and-development funds into additional capabilities for the vehicle, he noted. It has conducted trade studies to determine the feasibility of an up-armored ambulance. The Army is currently using the Humvee ambulance configuration.

Kits that should be made are a smoke grenade launchers' kit, a kit with 360-degee cameras on the roof corners and a monitor, and a fully enclosed stabilized armored remote-controlled turret kit. By "fully enclosed armored stabilized turret," I mean one that looks like the M117 ASV turret with 40mm and 12.7mm gun but with fire control and stabilization. Sure, CROWS II is the Remote Weapons Station of choice, and now CROWS II comes with Javelin ATGM launcher on the side, but that's still not a fully enclosed armored turret over the roof hatch.

The Russians have fully enclosed armored remote-control turrets for their GAZ Tiger that mounts a 30mm cannon. US DoD should copy the Russians as the URL below shows.

Never in the HMMWV's history has there ever been a fully enclosed turret. There always was the open-topped armored sidewall turrets that the gunner had to poke his head up and out so imagine all the casualties that resulted from gunners poking their heads up just to fire.

Why make a fully enclosed stabilized armored remote-controlled turret? To RELOAD the ammo under armor...plain and simple...and to have MORE ammo installed than a RWS like CROWS II.

Seriously, the US Army should think about making such an armored turret for the JLTV...copy the Russians. It would give the JLTVs heavy mobile protected firepower whereas the 360-camera kit or CITV would offer situational awareness.