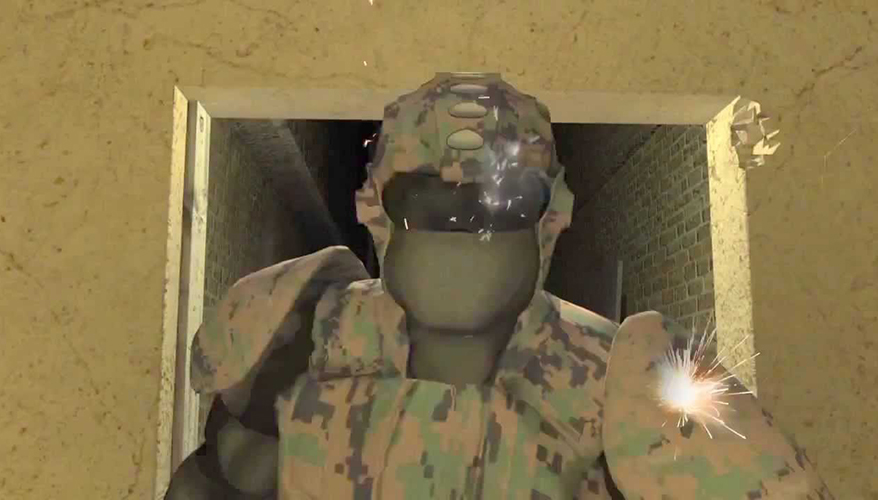 Tampa, Fla. — Despite recent reports that Special Operations Command missed the initial deadline to deliver a prototype for the high-profile tactical assault light operator suit, command leadership is confident that it will test a powered exoskeleton by summer 2019, officials said this week.

Five years ago, then-SOCOM Commander Adm. William McRaven set a five-year deadline to develop a working prototype for a suit that would offer greater protection to operators while providing greater mobility and speed in a lighter frame. It is intended for the first commando to enter a room during a raid. Operators kicking down doors are particularly vulnerable to small arms fire and bomb blasts. The death of a special operator in such a screnario inspired McRaven to start the program in 2013.

SOCOM officials revealed earlier this year that the program, also known as TALOS, will not make that deadline, which would have come up this August.

But officials believe they have surpassed the major setbacks and can make the new development timeline for the current prototype, also known as the Mark-5. Jim Smith, SOCOM acquisition executive, said May 22 that the TALOS program is going “very well,” but also noted that the effort was always expected to be challenging.

“You put a world-class athlete into a powered exoskeleton — that’s going to be a very difficult technology challenge. And we’re realizing a lot of those challenges,” he said during a keynote speech at the National Defense Industrial Association’s Special Operations Forces Industry Conference in Tampa, Florida.

Despite the year delay, Smith asserted that by next summer, an operator will test a powered exoskeleton prototype. That will ultimately help inform the broader Defense Department on how such a suit could benefit operations, and inform “the art of the possible,” he said.

In an exclusive interview with National Defense, Smith noted that TALOS has always been a high-risk, science and technology effort.

“We think the risk is worth the reward in terms of what we can do to improve the survivability of the individual operator,” he said.

The technology is maturing, he noted. The delay in producing an exoskeleton prototype was largely due to managing all of the different technologies that will ultimately work together to power, maneuver and enable the greater TALOS suit, he said. Other subsystems include an encompassing base layer, visual augmentation systems/operator interface, helmet, armor, and sufficient power and communications systems to operate untethered.

Smith said SOCOM is confident that the cycle will end.

Army Col. James Miller, director of the joint acquisition task force (JATF) TALOS, which serves as the project’s lead integrator, said the exoskeleton was hardest challenge when it comes to the overall suit, along with the visual augmentation system.

While describing the coveted capabilities for the exoskeleton, he noted that a prototype that matches all of the criteria has not been developed yet.

The task force has been developing a variety of prototypes made of plastic materials that are not powered but relatively heavy, to serve as surrogate test suits, he noted. That helps the team look for rough spots and further refine the design, he added.

“But we haven’t built one yet that we’ve used,” Miller said. The Mark-5 prototype is ultimately expected to be made of titanium, with a complex joint actuation system and novel material integration that enhances structural performance. It will also require sensor and control hardware and software that will aid with issues such as load transfer, movement ease and other physical performance enhancements.

Size, weight, power, dynamic agility and speed must all be taken into consideration, he noted. “If your armor is too big, too heavy, if it’s too flat, if it gets in the way, I’m not going to wear it,” he added.

The team must also determine how much of a burden is appropriate for an operator to carry, he said.

Some equipment needs to be felt, he noted. “You need to understand where it is; I just don’t want to get in my way. I don’t want to exert energy to move this system as I’ve tried to move dynamically in a place, whether it be in a structure or out in the open,” he added.

Though the task force is working to have the Mark-5 prototype ready to test next summer, Miller emphasized that that prototype was never intended to be fielded. It is meant to help the team understand what is possible and where it may be able to accelerate development of certain capabilities.

“And frankly, if it’s a no-go path flight, how do we dispense with it, say 'thanks' and move onto the next one?” he added.

The JATF expects to manufacture the exoskeleton suit before 2019, Miller said. There may be a number of different processes, such as printing or casting, that are used to build the parts, he noted.

However, there are a number of problem sets that still remain.

“How do you tweak the control sensing? Once you put the individual inside of an exoskeleton with the actual design, how do you make sure that actuators … move the amount that you want them to, but not too much, and move without latency?”

“We are not going to print something that isn’t going to work,” he noted.

As the task force progresses with the project, it is well-resourced to make the investments it needs to make, Miller said. He declined to provide funding numbers, but said “we are moving at a shoestring budget intentionally and purposefully.”