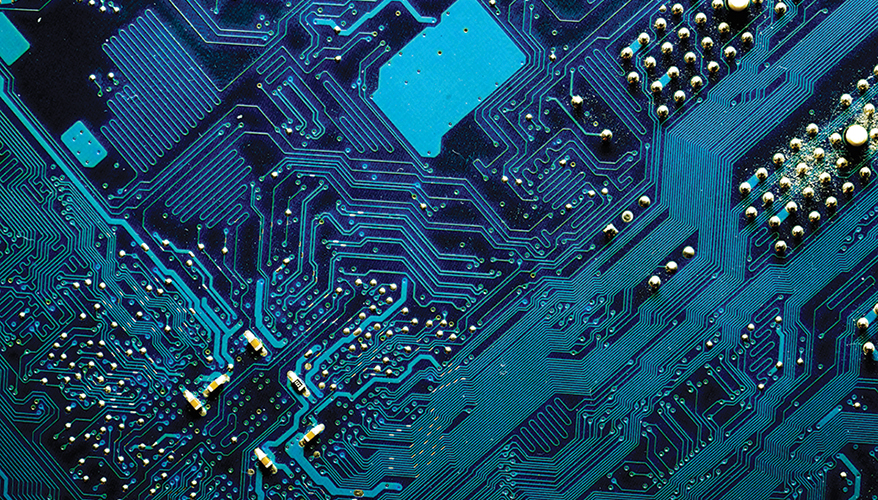 The integrated circuit, he wrote, “will lead to such wonders as home computers, … automatic controls for automobiles and personal portable communications equipment.”
Prescient, to say the least.

His theory that integrated circuits would double in capacity every 18 months to two years was soon proven to be a law. His charts showed this playing out until 1975, but in fact, the law has for the most part stayed on course until today.

By the end of the article, Moore was already speculating what would come after these chips had reached their full capacity.

That day is soon approaching. The end of Moore’s Law was a major topic of conversation at a packed Science and Engineering Technology conference in Austin, Texas. That, and China.

“I do not want everything in my house that is running on microelectronics to have a link into some Chinese capability,” Mary Miller, who is performing the duties of the assistant secretary of defense for research and engineering, said at the National Defense Industrial Association conference.

Chinese leaders have explicitly expressed a goal to dominate the microelectronics market by 2030. They are investing $150 billion into the campaign and will build 26 high-tech manufacturing facilities, she noted.

“They are committed. They haven’t wavered from that commitment. And their goal is to be the single source of microelectronics around the world. … If they become the sole provider, you don’t have competition and that’s not good,” Miller said.

And as Miller said, there is the trust factor. No one trusts the Chinese government to ensure safe and secure microchips when it has been robbing Western companies blind of their intellectual property for years.

Dick Urban, special assistant to the director of the Defense Advanced Research Projects Agency, said China currently has to get all its integrated circuits from other places while at the same time it is the biggest exporter of electronic products.

To create its indigenous microchip manufacturing industrial base, it will rely on U.S. chipmakers.

The Chinese are figuring out ways to leverage that big pot of money the government is investing. They are telling major U.S. semiconductor companies, “If you want to get access into the biggest electronic market in the world, then you need to come over here and manufacture,” Urban said.

“If you set up a manufacturing plant and you turn product 24/7, 365, you are going to learn how to make and manufacture integrated circuits. … And we’re really worried about that,” Urban said.

But as Moore said, something will come after the integrated circuit.

“We have been following that curve since the 1970s, but Moore’s Law is starting to run out,” Urban said. “The cost is rising exponentially and it is getting more and more expensive to make smaller and smaller gains,” he said. “We are starting to get in that area where we need to pay attention to what is going to be the next generation for microelectronics.”

DARPA’s new Electronics Resurgence Initiative will look at what comes after Moore’s Law runs its course.

“If we can put enough funding and make enough progress looking at what the next generation is, by the time the Chinese spend $150 billion and try to catch up with us, we are going to be off into something new,” Urban said. “There is a lot of risk in that strategy, but that is where we are going.”

Researchers are looking into advanced computing to deal with the end of Moore’s Law.

Vern Boyle, vice president of advanced technology at Northrop Grumman mission systems, said quantum computing and superconducting computing are two fields that are ahead of others.

They “are starting to move beyond the questions of feasibility and ready to move toward scale and manufacturability. You will get different opinions of the timeline,” he added.

Superconducting computers could be in production within five years and quantum within 10. “That’s not that far away when you think about how long it takes to get certain things done,” Boyle said.

“It’s possible quantum could be here before you know it.”

Marrujo said what comes next will probably be out of the Defense Department’s hands. Profit-driven motives often dictate what will be the next generation of electronics. So the defense industrial base, which buys a miniscule number of microchips compared to other sectors, doesn’t have much leverage. “If it is something that is not profitable then it cannot be the next thing no matter how good of a technology it is,” he added.

Eggers said: “I am not worried about American innovation. It’s there. It’s impressive. ... The difficult part is getting it into manufacturing, getting it into production.

“In the long run, we have to be able to outcompete, out-innovate and stay ahead of them all,” he said.