Army Rolling Ahead With Manned-Unmanned Convoys 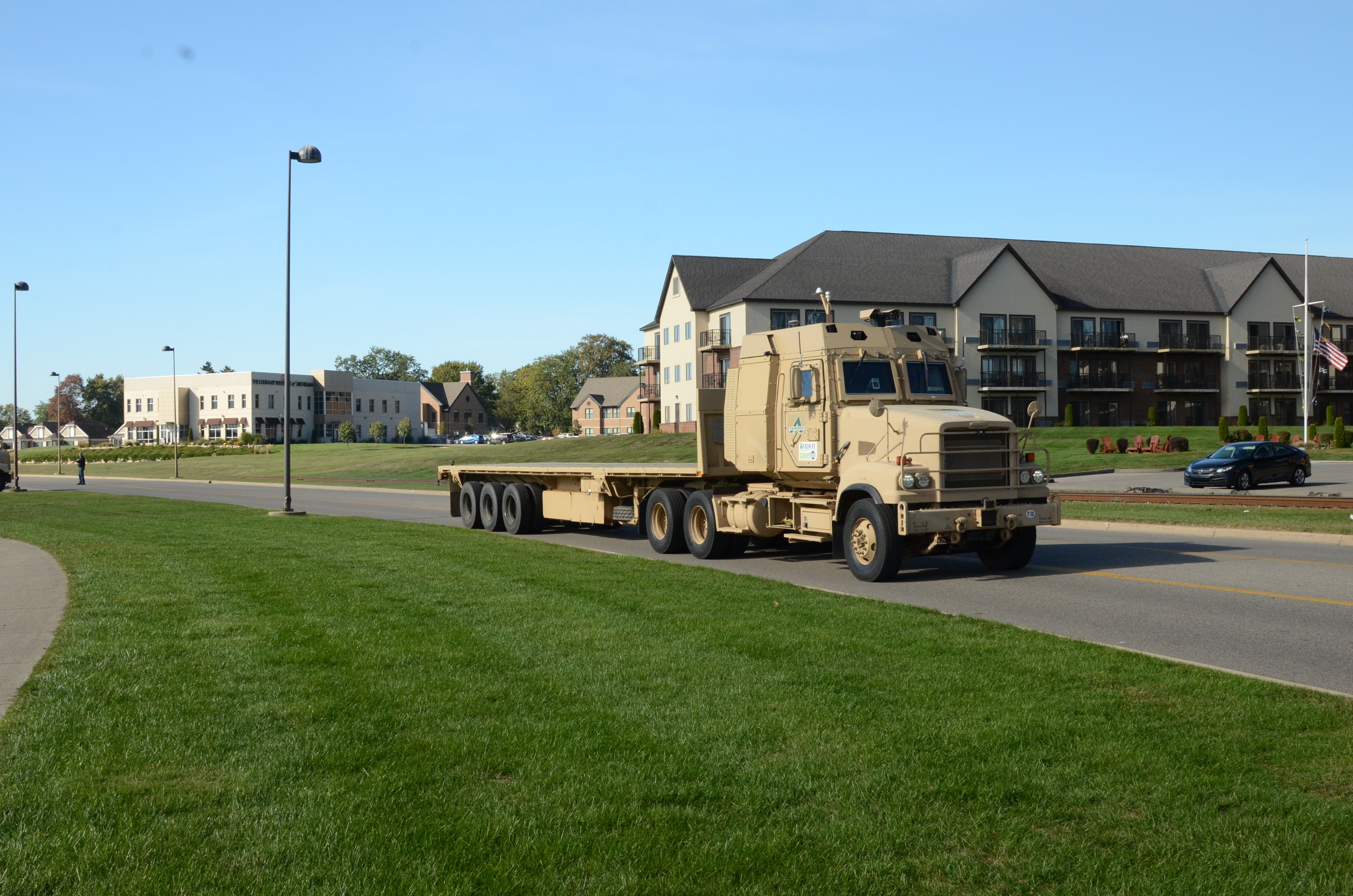 An M915 truck equipped with the Autonomous Mobility Applique System (AMAS) drives off for testing of the autonomous driving technology.

The Army is moving forward with efforts to develop an autonomous convoy capability that could help troops transport supplies, equipment and other resources more efficiently and safely across the battlefield.

The service’s Tank Automotive Research, Development and Engineering Center, or TARDEC, is overseeing several programs that look to eventually coordinate a manned leader vehicle with several unmanned follower trucks that could streamline convoy operations among the U.S. military and its coalition partners.

The tactical wheeled vehicle leader-follower effort will provide a limited autonomous capability to the palletized load system A1 vehicle, according to service documents. The plan is to have one manned “leader” truck direct seven unmanned vehicles. Initial efforts have one designated leader control up to three optionally manned followers as the technology matures.

The Army requested nearly $93 million in research, development, testing and evaluation funds in its fiscal year 2019 budget request for an array of robotics development activities, to include the leader-follower and robotic combat vehicle programs. The service estimates they will cost about $166 million through fiscal year 2023.

The leader-follower initiatives include several ongoing R&D programs that would ultimately lead toward a yearlong demonstration of the technology and a Milestone C decision by fiscal year 2021, said Kevin Mills, associate director for ground robotic vehicles at TARDEC.

Soldiers used the latest technology, known as autonomous ground resupply or AGR, at a demonstration last October at Fort Grayling Joint Maneuver Training Center, Michigan. The Army is developing AGR in three phases, and built the core architecture in phase 1 in 2017, Mills said in an interview.

The next two phases — to continue over the next two years — will focus on developing software improvements, design changes and building new behaviors for the unmanned trucks, he added.
About $32.5 million is requested in the 2019 budget for the autonomous ground resupply program. The Army plans to spend about $33 million in 2020 on the initiative and $30 million in 2021, according to service documents.

The Army is working with several industry partners on the project, Mills said. Robotic Research LLC, of Gaithersburg, Maryland, is providing the autonomy kit for the vehicles, while Oshkosh Defense is building the bywire kit that allows the truck to be remotely operated. Lockheed Martin is serving as the integrated system developer, while DCS Corp. is creating the graphic user interface that allows the soldier in the lead vehicle to control the follower trucks. More partners will come on board for the software improvements in phase 2, including Carnegie Mellon University’s National Robotics Engineering Center, he added.

TARDEC is now taking lessons learned from the October demonstration and refining the technology in anticipation of a 12-month operational technical demonstration slated to start in late fiscal year 2019, Mills said. About 30 leader-follower-enabled trucks will operate alongside another 30 manned trucks serving in a current convoy configuration as a control group.

“The warfighters will be able to use both systems to really understand the pros and cons that they have with the new capability we’ve provided them,” he said.

The Army’s Sustainment Center of Excellence will then create a capabilities production document that would inform a follow-on program of record, to be run under the program executive office for combat support and combat service support, Mills said.

Meanwhile, the service is also partnering with a United Kingdom Ministry of Defence agency on a separate autonomous convoy effort.

The coalition assured autonomous resupply, or CAAR project, covers up to $26.5 million in a joint effort between TARDEC, the Army’s Armament Research, Development and Engineering Center and the U.K.-based Defence Science and Technology Laboratory, or Dstl, to trial and demonstrate semi-autonomous and unmanned technologies from both countries for tactical logistics and distribution on the battlefield.

Pete Stockel, the innovation autonomy challenge lead at Dstl, said CAAR emerged as both militaries were looking to take better advantage of emerging technologies to reduce burden and operational risk for troops.

“The pace of change of some of the really important technologies for the 21st century isn’t being driven by defense and security; it’s being driven by the commercial sector,” he said. Moreover, adversaries are moving forward with many of those systems, “so we’re keen to stay abreast of what the threat is able to harness as well,” he added.

Dstl, which is the British Ministry of Defence’s civilian-led “in-house science and technology organization,” spearheads the CAAR effort from the United Kingdom, with sponsorship from the British army, he said. Incorporating autonomous technologies into land tactical logistics was a shared effort, and it made sense for the two countries to pool their resources, he added.

The United Kingdom is particularly interested in the “autonomous last mile” effort in the CAAR program, he noted. “The last mile is about how do you get supplies and resupplying, ammunition, spares, critical medical items right to the very frontline?” he said. “That’s quite difficult to do because often it’s dangerous. It’s a contested part of the battlespace and it’s a very clustered environment.”
ARDEC is assisting with air solutions for the last mile project, he added.

The initiative is about to enter phase 2 in April with a downselect for air and ground vehicles systems, Stockel said. Twenty-five companies participated in phase 1 with tracked and wheeled vehicles, and the next step is to choose up to six prototype systems best suited for autonomous capabilities, he said. The project has allocated about $3.2 million for the downselect.

“We hope to get those [prototypes] on contract in May. … Things are moving very quickly,” he said. The British army is planning a warfighter experiment exercise at the end of 2018, where the chosen prototypes will be put through their paces, he added.

The CAAR program also addresses how to more effectively handle the tactical distribution chain, and how autonomous technologies may also be applied to the information systems that support or enable that chain, Stockel said.

The October 2017 demonstration was “starting to show that we could put U.S. and U.K. components … and troops together, and get them jointly operating at this level,” he said. Over the next few years, the team plans to add more components of the resupply chain into the demonstrations.

The coalition assured autonomous resupply initiative kicked off in early 2017 and will run for three years, said Jeff Ratowski, TARDEC program lead for the CAAR project. An initial demonstration was also held at Camp Grayling this past October that included a leader-follower demonstration of the coalition convoy, “which we believe is the first of its kind,” he added.

The demonstration included a British HX-60 vehicle being robotically followed by two U.S. Army light medium tactical vehicles, along with two robotic Humvee escort vehicles, he said. The Army also employed an autonomous Polaris MRZR to show how the ultra-light vehicle could help deliver supplies from the forward operating base to frontline soldiers, he noted.

Since the demonstration, U.S. and U.K. officials have been working to refine and improve those technologies, and expect to hold a 2018 test planning meeting soon. Another demonstration is in the works for 2019 at a yet-to-be-determined location, Ratowski said.

Industry is also investing in the CAAR program. Lockheed Martin, DCS Corp. and the Southwest Research Institute are contributing to the convoy effort, while ARDEC worked with British firms Malloy Aeronautics and Gilo Industries Group for the air component of the autonomous last mile initiative. More partners could come on board in 2019, he added.

Having an interoperable capability for supply and equipment transport is mutually beneficial for the NATO allies, Stockel said. Other NATO nations are also interested in how the program fares, he added.

While any potential program of record remains years away, the technology the Army and its partners are seeking is nearly mature in the commercial world. Paul Scharre, director of the technology and national security program at the Washington, D.C.-based Center for a New American Security, said at its core, the leader-follower effort is applying existing technologies being used in the private sector to develop sophisticated autonomous driving systems for the battlefield.

“The specific leader-follower concept is in many ways much less ambitious than autonomous cars; it’s much more like intelligent cruise control,” he said.

While the U.S. military may eventually want to get to a point where a truck could navigate over rough terrain on its own, the current leader-follower efforts are less ambitious, but also more achievable in the near term, he said.

Implementing this capability into existing convoy operations has several advantages, Scharre said. The main benefit is smoother operations, with less risk of traffic jams and issues that could cause the trucks to break contact with each other. It can also result in more effective and safer operations for vehicles that are vulnerable to enemy attack.

Cost savings in terms of personnel and equipment is also a consideration, he added.

The major hurdle to fielding a manned-unmanned convoy capability is not the technology, but funding and acquisition obstacles within the Defense Department, he said. But the rhetoric has begun to change in the Army with renewed interest in robotics. That could have a positive impact on prioritizing these types of programs, he noted.

Service Chief of Staff Gen. Mark Milley has spoken at recent industry conferences about prioritizing robotic development for air and ground vehicles, and the Army put out several reports in 2017 outlining its autonomous technology goals. Service documents indicate that robotics funding has soared in the last five years, from just $20 million in fiscal 2014, to $156 million requested in 2018.

The timing could be due to the fact that the technology has now matured on the commercial side “to the point where it’s very hard to ignore it,” Scharre said. When top-of-the-line cars now possess advanced cruise control features, “it’s sort of hard not to ask the question about ... what is the Army doing and how could we use this?”

Mills said that he has seen more Army support for robotics programs. “In the past, it has been very challenging to get a requirements basis from the warfighter that would help pull the autonomous technology forward.”

The service’s Future Combat Systems was “probably the last time the Army considered robotics platforms in a system context across the whole Army,” he said. But now the service is sending a demand signal, and the science and technology community “is definitely ready to posture the technology to meet those demands,” he added.