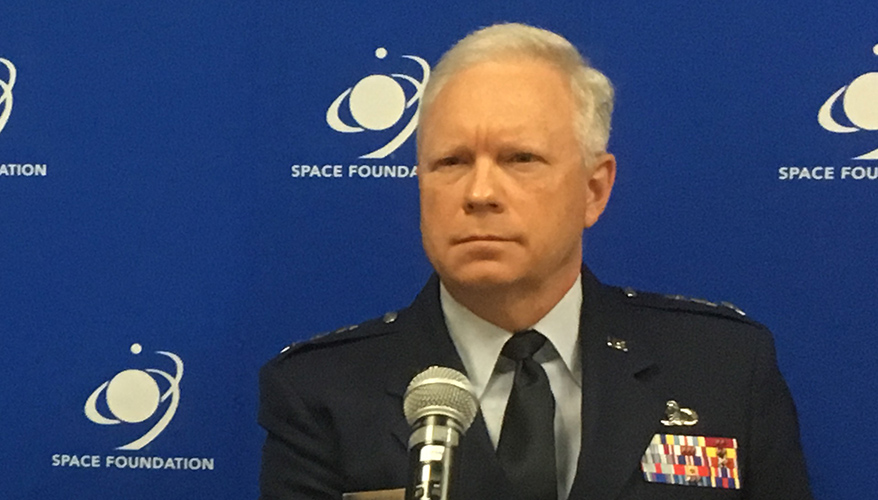 COLORADO SPRINGS, Colo. — It will be at least another year before the Air Force Space and Missile Systems Center will be talking publicly about what comes next for its protected communications satellites.

“The strategy for recapitalizing those very resilient, or becoming more resilient fleets, are in development," he said. "In the next year or so, there should be a lot more discussion publicly about what we plan to do to stay ahead of the threat from a defendability, resiliency, capability perspective, flexibility perspective."

The Air Force has not begun a new satellite communications program since the cancelation of the Transformational-Satellite program in 2009. Since then it has conducted a series of studies and analyses of alternatives on what it should do next, and has continued to field its two primary communications satellites: Wideband Global SATCOM and Advanced-EHF.

Congress, meanwhile, added two new WGS satellites with a price tag of $600 million to the 2018 Air Force budget, which the service had not requested. Both major communications fleets were designed in the 1990s, although they have had block upgrades since then.

Thompson said the addition of the two new satellites will not affect any of the ongoing studies about the future military satcom architecture.

When the Space and Missile Systems Center is ready to begin work on new communications satellites, it will have a different bureaucracy. Secretary of the Air Force Heather Wilson announced earlier in the conference that the center would be reorganized in order to speed up acquisition timelines. The effort has since been dubbed SMC 2.0.

Thompson said: “Because of the nature of the threat, the need to be more innovative, the need to go faster ... now is the right time to re-architect, re-design how we manage programs."
.
The reorganization is going include the creation of a “space portfolio architect” position, and offices devoted to partnerships and innovation. This architect will serve as a chief technology officer, a chief systems engineer and chief integrator, Thompson said. He will also make capability recommendations. The architect has not been hired yet, he added.

“We have become too stovepiped in managing very large programs of record, in very large insulated programs. What we need to do is manage more like an enterprise ... and take advantage of similarities between programs, to take advantage of partnerships, innovation and speed, to establish a portfolio architect,” he said.

Thompson wants to see that “we are concentrating more on capability and speed to market to get effective warfighting systems to our warfighters and do it more efficiently for our taxpayers."

In that light, Wilson announced a pathfinder program — the next-generation missile warning satellites — that will shave four years off the normal nine-year development timeline.

Thompson said instead of automatically starting off with large “exquisite” programs of record, the center will do more prototyping, demonstrations and experiments. “SMC 2.0 helps us establish more common architectures and baselines for defensibility of our satellite communications and resilience across the enterprise, not just individual programs,” he added.

There is a “tiger team” of personnel working on establishing SMC 2.0, which is expected to reach initial operating capability Oct. 1, Thompson said.