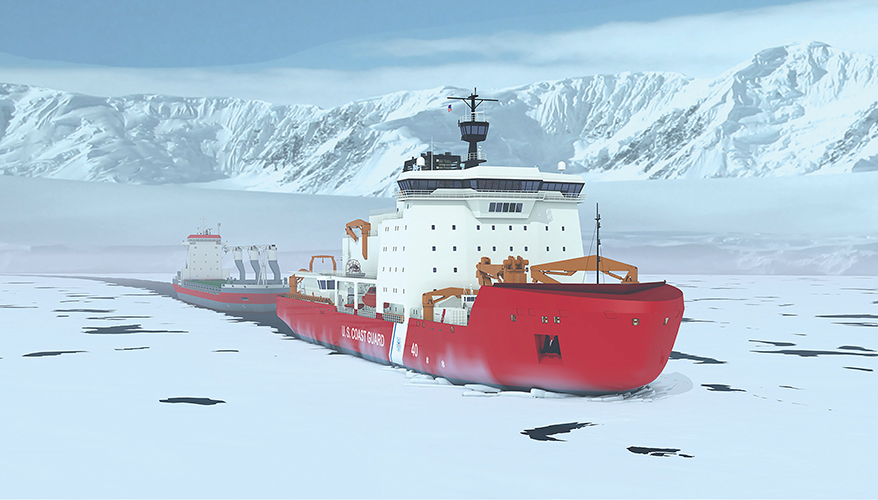 With the Coast Guard’s sole heavy-duty polar icebreaker quickly reaching the end of its life, the sea service has kicked off a competition that will pit some of the United States’ most storied shipyards against each other as they vie for the opportunity to build the nation’s next polar vessel.

At the annual State of the Coast Guard address in March, commandant Adm. Paul Zukunft announced that the service would issue a request for proposals for a new heavy polar icebreaker the next day.

With the support of both the Trump administration and Congress, the lead vessel would begin the recapitalization of the United States’ fleet of icebreakers, he said.

“We’re closer than we’ve ever been to new icebreakers,” Zukunft said during the event, which was held at the National Press Club in Washington, D.C.

For years the service has been pushing for funding to procure a new class of vessels as its legacy fleet ages and a warming climate turns international attention toward the Arctic.
Its current line of operational ships includes the USCGC Polar Star, a heavy-duty icebreaker, and the USCGC Healy, a medium-duty vessel used primarily for research purposes. The Polar Sea, a heavy-duty model, is mothballed.

The current plan is to procure six new ships — three heavy and three medium variants. The lead vessel is slated to be fielded by 2023 and is expected to cost under $1 billion, Zukunft said during a meeting with reporters.

The service is planning to procure the lead ship first and then do a block-buy contract for subsequent vessels, he said.

The Coast Guard requested $750 million for the icebreaker effort in the president’s proposed fiscal year 2019 budget.

The Navy is working with the Coast Guard via an integrated program office on the acquisition effort.

In 2016, the Coast Guard released a request for information from industry to collect feedback to inform its polar icebreaker approach and schedule. In October, the Navy released a draft request for proposals for the detail design and construction of one heavy icebreaker with options for two additional such ships.

The arrival of the first vessel will coincide with the retirement of the Polar Star, which is currently “living on borrowed time,” Zukunft said during an industry conference in January.

“We are really up against parts obsolescence,” he said. “We are using the Polar Sea as an organ donor, if you will, to harvest what parts we can get off of her to keep the Star going.”
Proposals from industry are due this summer.

Jerry Hendrix, director of the defense strategies and assessments program at the Center for a New American Security, a Washington, D.C.-based think tank, said it will be a tough competition.

“If I was in industry I would be really nervous at this point in time because … this is a healthy competition,” he said.

All of the competing yards are known for their quality, but some are smaller than others, such as VT Halter and Bollinger, he noted.

“They’ve got great solid reputations, but they’re not General Dynamics and Huntington Ingalls,” he said. “There is not as much ability to absorb cost overruns or anything there.”

Those four competitors haven’t built an icebreaker, whereas Fincantieri Marine Group manufactured the USCGC Mackinaw, a non-polar icebreaker used on the Great Lakes. Additionally, the group’s parent company, Italy-based Fincantieri, has built a number of icebreaking vessels recently for countries such as Norway and Canada.

“They’ve had probably the most recent experience in building an icebreaker,” Hendrix said. “It’s a very specialized skill to build icebreakers as opposed to a combatant or a cruise ship or something else — it’s a reinforced keel, it’s thicker steel, it’s a different type of steel. … There’s a reason icebreakers tend to be more expensive.”

Seth Cropsey, director of the Center for American Seapower at the Hudson Institute, a Washington, D.C.-based think tank, said the competition is “a boost in the arm for American shipbuilding.”

As the companies prepare their offerings, they also face challenges, Cropsey noted.

The last major icebreaker — the Polar Star — was commissioned in the 1970s, he said. “There are some skills that are needed here, and those will have to be brought back to life.”

However, that is not an insurmountable obstacle, he added.

Hendrix said the companies will have to ensure their offerings are up to date.

“Ships do evolve over time,” he said. “You may think a ship is a ship is a ship, but the fact is that there have been advances in maritime design and it’s a continually advancing engineering and science field.”

They will also need to focus on working in efficiencies from the start, he said.

“You want to set yourself up for success here,” he said. “You want to look at production to make sure it’s the most efficient.”

With its recent experience building icebreakers, Fincantieri Marine Group believes it is in an advantageous position, said Bruce Baffer, capture lead for the company’s icebreaker program.

Because U.S. yards have little experience building polar icebreakers over the past few decades, the company realized it needed to assemble a team with global roots, he said.

“Nobody has real comparable heavy icebreaker experience. The closest thing is the heavy Great Lakes icebreaker Mackinaw that we built in Marinette,” he said. “[We] went with a global team to get all the worldwide expertise that we needed to actually execute this program. … We’ve got the designers, the builders, the folks that really understand icebreaking on the team to make sure that we put together a product that meets the Coast Guard’s needs.”

On the Fincantieri team is the firm that designed the Canadian Coast Guard Ship John G. Diefenbaker, which is slated for delivery this year, he said.

The icebreaker is a heavy variant and meets all Coast Guard requirements, Baffer said. “It was a matter of optimizing it for the U.S. Coast Guard and making sure that it’s producible and we can build it efficiently and quickly.”

However, the Canadian vessel’s mission is different than what the United States’ ship would be, he noted.

Additionally, the U.S. icebreaker will have to traverse great expanses of open water, he said.

If Fincantieri wins the competition, it plans to build the icebreaker at Philly Shipyard in Philadelphia, which focuses on commercial vessels, Baffer said.

One of the big concerns with building a new icebreaker is the steel work surrounding it. The vessels are much thicker than a normal surface combatant or frigate, he noted.

“Building that structure and that steel work is what’s really unique about the heavy icebreaker,” he said. “We looked at Philadelphia Shipyard and they have the heavy steel capability and the heavy steel expertise.”

The shipyard also uses commercial best practices, which make production less expensive and faster than it would be at a yard that only works on government vessels, he added.
That will “pay dividends in terms of schedule here,” he said.

The company is also working on ways to make its icebreaker sustainable for the Coast Guard, Baffer added.

“We’ve really looked at the challenges that they’ve had in sustaining Polar Star and keeping it operational,” he said. The vessel has undergone a refurbishment to keep it in the water until a new icebreaker can be procured, but many parts had to be taken from the Polar Sea.

Fincantieri wants to ensure that the Coast Guard will have reliability over the next 40 years, Baffer said. That includes having spare parts at the ready and the ability to maintain the vessel and not have to dry dock it every year.

Bollinger, General Dynamics and Huntington Ingalls declined to comment for this article. VT Halter Marine was unable to provide comment before press time.

Icebreakers are of critical importance for the United States for a multitude of reasons. They are needed to plow through thick ice in the Antarctic region so they can reach the United States’ McMurdo Station research center on Ross Island annually for resupply missions.

They are also needed to project power in the Arctic region, particularly as the United States faces threats from nations such as Russia and China, Zukunft said.

“Russia has already claimed most of the Arctic Ocean,” he said. “They are militarizing the Arctic. In 2020, if not sooner, we will see two [Russian] icebreaker corvettes armed with cruise missiles flying the high latitudes.”

China — which already has an icebreaker — is also building a new vessel and has been keeping its eye on the United States’ extended continental shelf. The shelf — which is about the size of Texas — is rich in resources including oil, natural gas and minerals, Zukunft said.

“It’s a strategic reserve if you want to look at it in that context, maybe not ripe for exploitation today” but it could be in the future, he noted. “We often find ourselves playing the short game [and] thinking one, two, three years out. But China plays the long game, and so they are playing the long game out there,” he added.

The Coast Guard is considering arming its new icebreakers with offensive weapons, he noted. It may be in the United States’ best interest to do so should the world change in the next five to 15 years, he said.

While Zukunft did not specify which weapons are being pondered, they would need to be modular and effective in extremely cold conditions, he noted.

Hendrix said it is wise that the Coast Guard is thinking about arming the vessels. The service could integrate weapons like surface-to-surface or surface-to-air missiles to provide for local-area defense of the ship, he said.